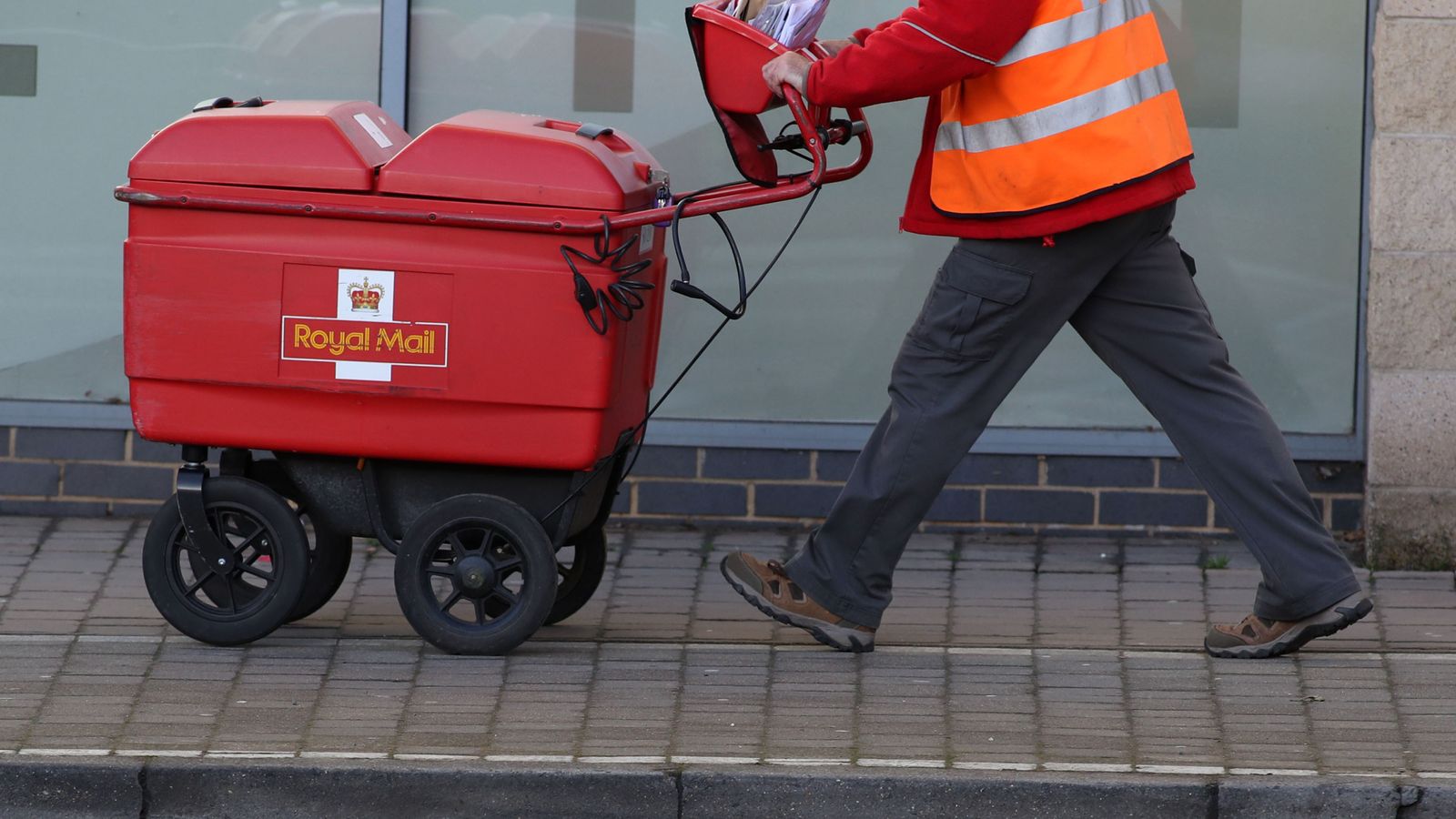 The boss of Royal Mail has told Sky News it is keeping prices “under review” as costs surge across the business and that unions threatening strikes must understand the “changes that are required so we can compete in the market”.

Simon Thompson was speaking as the company faces challenges to its modernisation plans across its business, with Unite currently balloting managers over proposed job losses.

The Communication Workers’ Union (CWU) is also threatening industrial action but over pay.

The cost of living crisis has prompted a series of demands across the private sector for wage levels to rise in line with inflation – currently running at 9%.

Unions are also challenging any sniff of proposals to cut costs that could impact their respective memberships.

The CWU, which represents 115,000 postal workers at Royal Mail, has led strikes at so-called crown Post Offices in recent months and is also balloting workers at BT in a row over pay.

It accuses Royal Mail of profit greed at the expense of its members.

The various rows all build towards a potential “summer of discontent”, as one union described the mood this week, which is set to gather steam in earnest next week.

That is when 50,000 rail workers across the country, including Tube staff in London, are due to walk out in battles for better pay and job security.

It is Royal Mail’s modernisation plans, towards a more parcel-focused business, that are among the grievances for unions.

They include concerns about delivering parcels more widely on a Sunday following a £900m investment by the company to automate its network and create so-called “superhubs” – the first opening in Warrington – to bolster delivery capability.

Unite said it was opposing “plans to remove 542 managers” on top of 450 jobs already axed.

There is a pay offer of more than 5% on the table with the CWU, though the company has announced an “unconditional” 2% increase to take effect in July following a failure to reach an agreement over a rise linked to changes in terms.

Mr Thompson told Ian King Live the decision to bring in the increase was taken after talks with the union were “exhausted”, as staff deserved help with the rising cost of living now.

“Next week… we will be back in the room with the CWU talking about the change and let’s just be clear on this: what we’ve put on the table was a 5.5% pay increase – the 2% unconditional we’ve now paid,” he explained.

“We would really love to sit down and discuss in a very positive way the changes that are required so that we can compete in the market.”

He added that as part of the 5.5% pay proposal there was a 2% “above and beyond” bonus scheme.

On the prospect of further increases in parcel and first class stamp costs – which have risen by 4% and to 95p, respectively, this year – Mr Thompson said he could not rule out rises this year.

But he explained that while Royal Mail had already had to charge more because of rising costs for things such as power and fuel, it was also important that it maintained its competitiveness for partner retailers.

Adam Boulton on lessons to be learned from strikes past, present and what they mean for the future
Raekwon McMillan, revamped linebacker group among keys to Patriots season
Astronomers Observe Distant Galaxy Emitting Star-Forming Material
The PR attempt to separate JK Rowling from Harry Potter and why it’s important
Zelenskyy to urge G7 to do more to help war effort as Johnson to demand action on Ukrainian grain