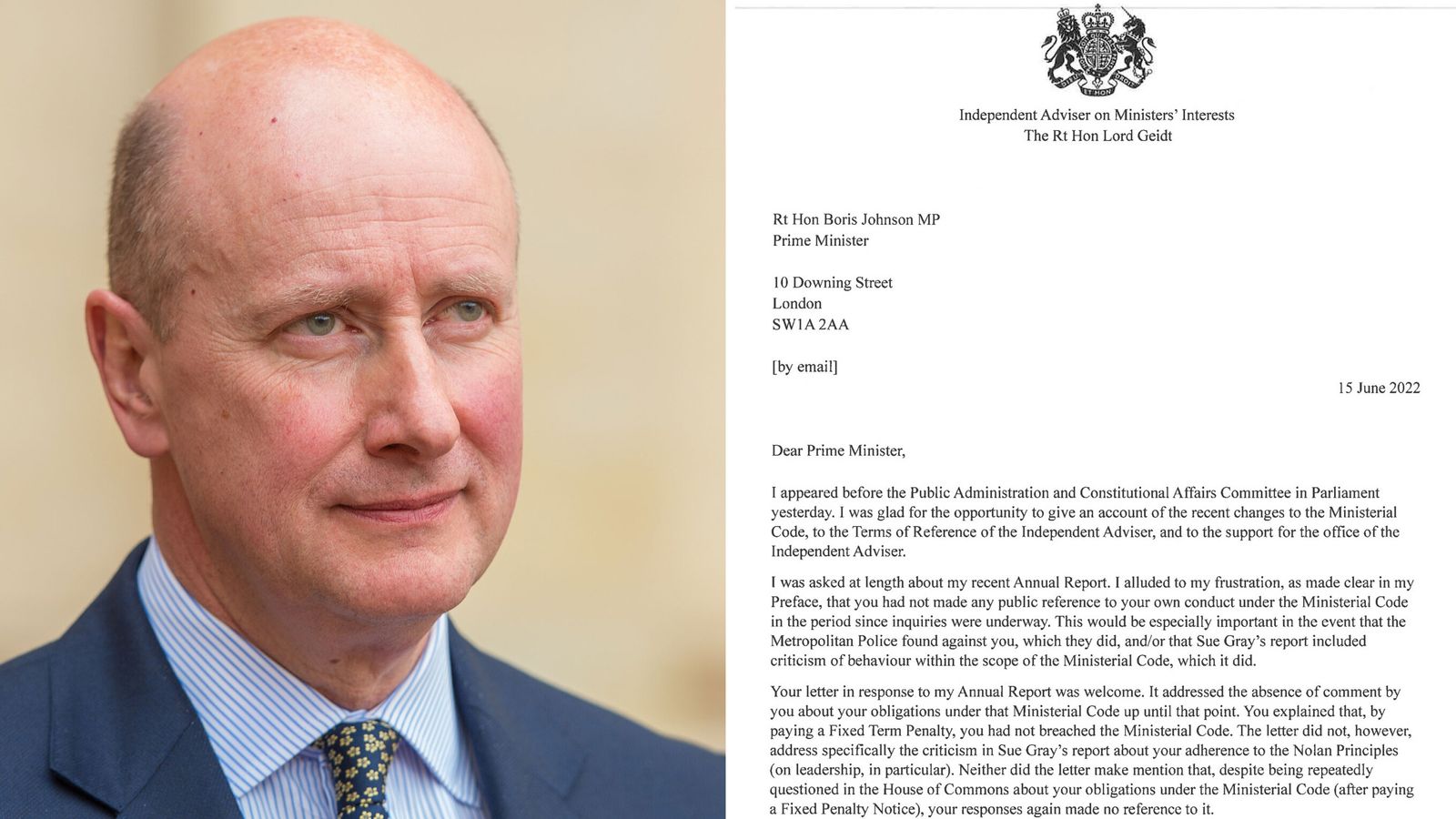 Boris Johnson’s ethics adviser told the prime minister he was quitting after being placed in an “impossible and odious position”.

Downing Street published Lord Geidt’s resignation letter a day after he unexpectedly decided to step down, becoming the second in the role to do so under Mr Johnson.

Lord Geidt admitted this week that he had considered resigning over Mr Johnson’s response to his partygate fine for breaking COVID-19 rules.

In an exchange of letters with the PM explaining why he was leaving now, he admitted that his belief that it was possible “to continue credibly as independent adviser” after the partygate scandal was only taken “by a very small margin”.

But the ultimate reason for his departure focused on a separate issue, apparently relating to potential future decisions on trade tariffs.

In his letter to the prime minister explaining the decision, Lord Geidt said he has been asked this week to offer a view on “measures which risk a deliberate and purposeful breach of the ministerial code”.

He added: “This request has placed me in an impossible and odious position.

“The idea that a prime minister might to any degree be in the business of deliberately breaching his own code is an affront.”

Lord Geidt said even an intention to breach the ministerial code deliberately “would be to suspend the provisions of the code to suit a political end”.

He added: “This would make a mockery not only of respect for the code but licence the suspension of its provisions in governing the conduct of Her Majesty’s ministers.

Lord Geidt said that because he had been fulfilling an obligation to appear as a witness before a select committee in parliament earlier this week, this was his first opportunity to react and he was therefore resigning with immediate effect.

Mr Johnson said in response that the letter “came as a surprise” after the peer had told him on Monday that he was happy to stay on until the end of the year.

He said that he had been seeking Lord Geidt’s advice relating to the Trade Remedies Authority – a body set up to protect UK firms from unfair competition – about the national interest in protecting a “crucial” but unspecified industry.

Mr Johnson said that industry “is protected in other European countries and would suffer material harm if we do not continue to apply such tariffs”.

The PM said that in the past such measures had cross-party support.

He added that the tariff decision “would be in line with our domestic law but might be seen to conflict with our obligations under the WTO [World Trade Organisation]”.

“In seeking your advice before any decision was taken, I was looking to ensure that we acted properly with due regard to the ministerial code,” he added.

The PM thanked Lord Geidt for his service and said he had carried out his work “under very difficult circumstances”.

His exit follows the resignation of his predecessor, Sir Alex Allan, in 2020 and the departure of the prime minister’s anti-corruption champion, John Penrose, last week.

The Liberal Democrats called for an urgent update on what the PM is planning and why it would be a breach of the ministerial code.

The party’s chief whip Wendy Chamberlain said: “It looks like Boris Johnson is planning to break his own rules yet again.

“The prime minister now needs to come to Parliament and answer questions about these extremely serious allegations.”