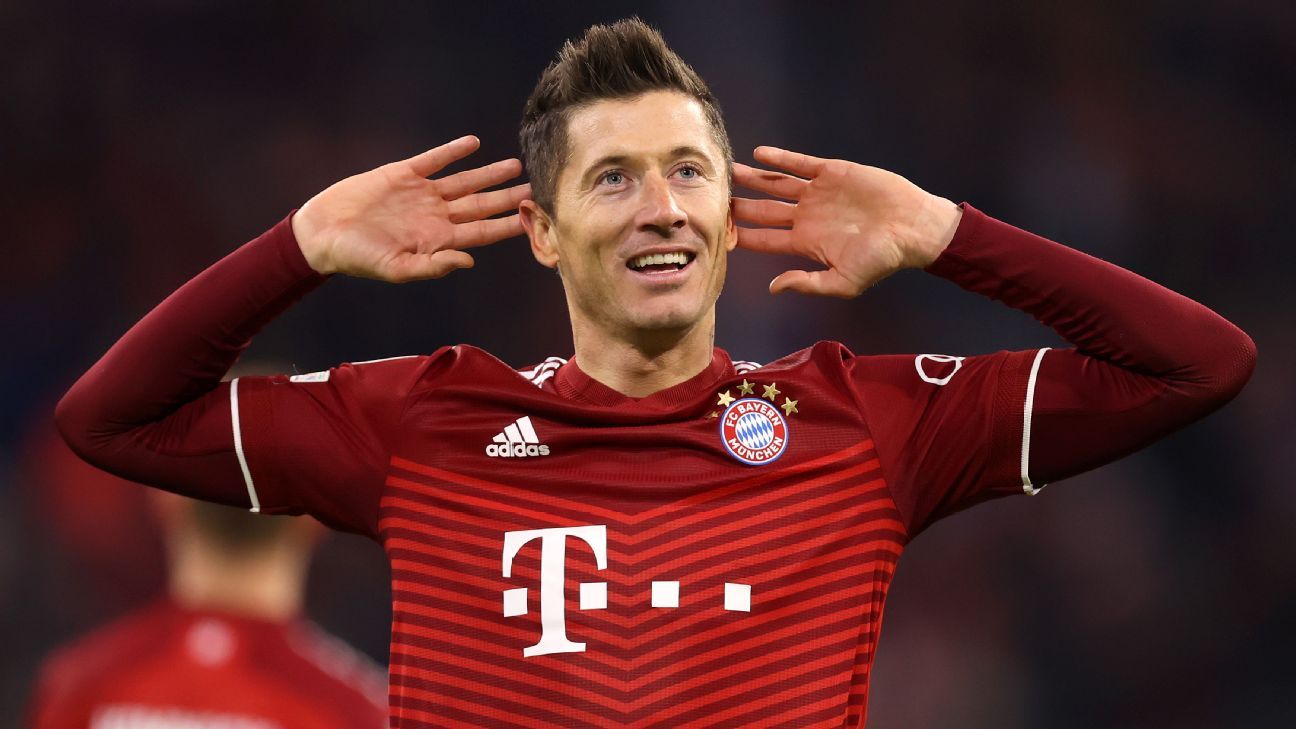 Lukaku out, Lewandowski in?

Chelsea head coach Thomas Tuchel would like to replace Romelu Lukaku with Robert Lewandowski, but there are significant obstacles to completing both deals, sources told ESPN.

Lukaku is keen on rejoining Inter Milan and endured a disappointing first season back at Stamford Bridge — with eight goals in 26 Premier League games — after leaving the Serie A club for €115 million last summer.

Sources told ESPN that talks took place between Lukaku and the club in recent days, during which Chelsea signalled their willingness to allow the Belgian striker to leave the club. However, the Blues want to recoup the vast majority of the club-record fee they paid just a year earlier, while Inter are short on cash and would prefer a loan deal.

Chelsea had originally been asking for around €20m-€25m to loan Lukaku for just one season in an effort to offset any depreciation in his transfer value given he turns 30 next year. However, they are now willing to accept a significantly lower fee and talks are continuing — it is as yet undecided whether any agreement will include an option or obligation to make the move permanent, or how his £300,000-a-week wages will be paid.

Simultaneously, Chelsea are seeking a striker of their own to reshape their attack. Chelsea held an interest in Erling Haaland but were unable to compete with Manchester City due to sanctions blocking transfers imposed by the U.K. government arising from former owner Roman Abramovich’s alleged ties with Russia president Vladimir Putin.

Tuchel has long been an admirer of Lewandowski, who has confirmed his intention to leave Bayern Munich, and believes he would thrive in the Premier League despite turning 34 in August. The Poland international has been heavily linked with a €40m move to Barcelona with reports in Spain this week suggesting he has verbally agreed a deal, but a lack of funds is holding things up.

Several rivals are looking to pounce on any uncertainty with Paris Saint-Germain and Manchester United among the clubs linked with Lewandowski. Sources told ESPN that Tuchel has encouraged Chelsea to enter the running if there is any chance a deal can be done.

But should Lewandowski sign for Barcelona, Chelsea will turn their attention to other targets. It is unclear at this stage which alternative they would pursue but the Blues have been made aware of Gabriel Jesus‘ availability at City — ESPN revealed on May 19 that Arsenal had been quoted a fee of £55m to sign the Brazil international — and the Blues have asked to be kept informed of any developments as a number of clubs are interested. ESPN reported on Thursday that Arsenal were closing in on the striker’s signature.

Chelsea would be able to offer Champions League football to Jesus, but the 25-year-old has a good relationship with Gunners boss Mikel Arteta from their time together at City. The Blues have also scouted RB Leipzig‘s Christopher Nkunku, who could cost as much as €100m, among several others. — James Olley

Steve Nicol and Ian Darke detail why Darwin Nunez would be the perfect signing for Liverpool.

Barca missed out on Darwin for bargain fee

Liverpool’s new €100m signing Darwin Nunez almost joined Barcelona for as little as €8m two years ago, but the LaLiga side dropped out of the bidding when Benfica got involved, sources told ESPN.

Barca’s former sporting director Ramon Planes, who was integral in the signings of Pedri and Ronald Araujo, lined up a deal with Almeria in the summer of 2020 to sign Nunez and leave him on loan at the Spanish second division side for a season.

Coach Ronald Koeman had also given the green light to the transfer as Barca sought a long-term Luis Suarez replacement, but Benfica emerged with an offer worth €24m and the Catalans withdrew their interest.

Uruguay striker Suarez had himself advised Barca to push through a deal for his compatriot. “I told them: ‘Take care of Darwin. Watch him, he’s very good,” he revealed previously. “They told me he was at Almeria and still very young, but instead of paying €100m [now], at the time it would have been €20m and, for example, he could have been the replacement for [me].”

Nunez joined another of Suarez’s former sides this week, signing for Liverpool in a €75m deal that could reach €100m with add-ons, while Barca look to fill their need for a No. 9 by targeting Lewandowski. — Sam Marsden and Moises Llorens

Senior figures at the Football Association were shocked by the level of vitriol aimed at Gareth Southgate during Tuesday’s 4-0 UEFA Nations League defeat to Hungary but remain entirely supportive of the England manager, sources told ESPN.

A much-changed lineup at Molineux suffered England’s worst result at home since 1928, leading to chants of “you don’t know what you’re doing” and “you’re getting sacked in the morning” aimed at the 51-year-old.

Southgate led England to the 2018 World Cup semifinals and their first major final in 55 years last summer, missing out on the Euro 2020 crown in a penalty shootout defeat to Italy.

Sources told ESPN that the FA hierarchy were stunned at the supporters’ reaction to Southgate, given he has previously enjoyed great popularity among the fanbase and achieved so much during his time in charge.

There is no suggestion whatsoever that Southgate’s position is at risk ahead of the finals in Qatar this November. He is under contract until 2024 but the customary post-tournament review will include an assessment of his future. It remains possible that Southgate could walk away from the role. He said only last week he would “not outstay my welcome” as England manager and, having occupied the post since 2016, sources told ESPN that there are some employees at the FA who believe he could call time on his tenure depending on the outcome in Qatar.

Tournament performance will be the deciding factor but Southgate places great importance in the public perception of his suitability for the job. Tuesday night was therefore far from a knockout blow but one which will have left its mark. — James Olley

Mauricio Pochettino is the top target to take over at Athletic Club if Ricardo Barkala is elected as the club’s new president later this month, sources told ESPN.

Barkala has already convinced former Barcelona sporting director Ramon Planes to join his project, which he hopes would persuade Pochettino to accept the job. Planes and Pochettino previously worked together at Espanyol and Tottenham and remain close.

Sources told ESPN earlier this week that Pochettino will leave his role as Paris Saint-Germain coach after just 18 months in the job, which removes one hurdle for Barkala.

Athletic’s members will vote in a new president on June 24, with Barkala one of three candidates running in the election. Jon Uriarte is the favourite. The third candidate is Inaki Arechabaleta, who reports suggest will look to bring in Marcelo Bielsa as coach if he is elected.

Former Athletic coach Marcelino left the club at the end of the season after leading them to eighth place in LaLiga, missing out on Europe on the final day of the campaign. He cited the uncertainty regarding his future due to the upcoming election as the reason for his departure. — Sam Marsden and Moises Llorens.