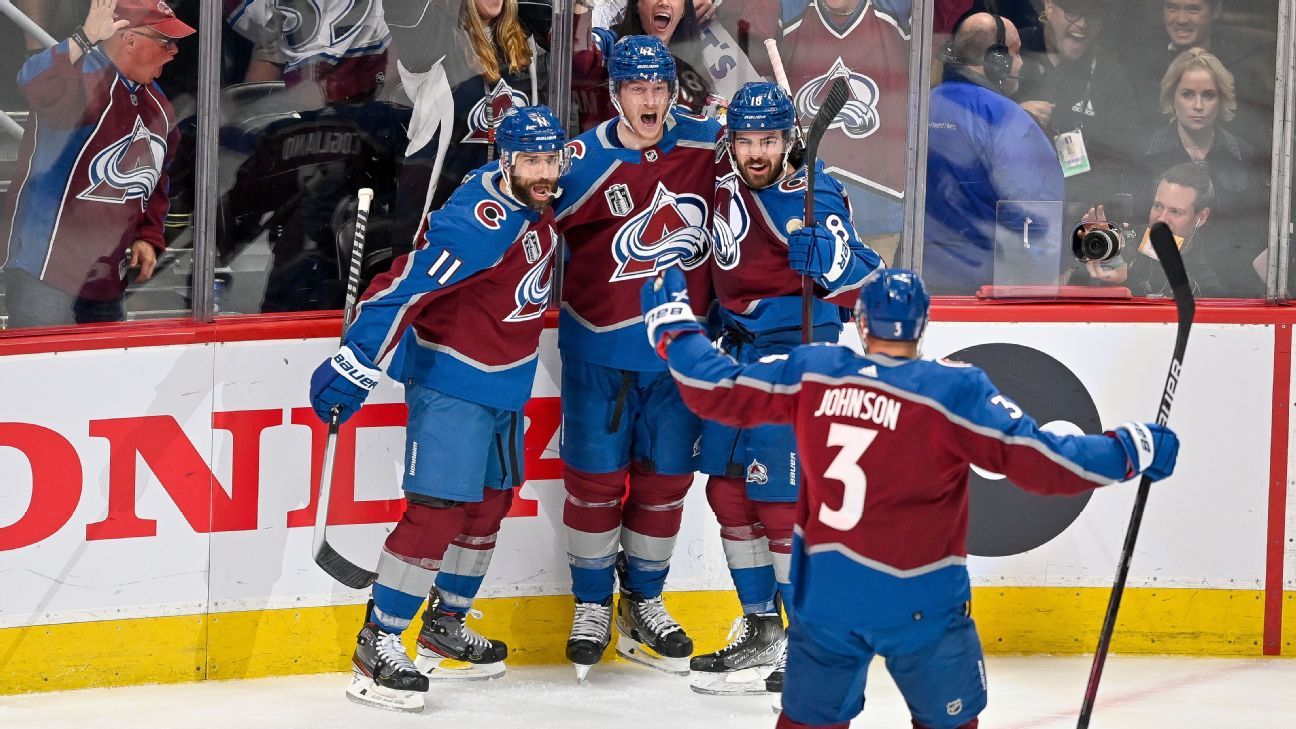 Game 1 of the 2022 Stanley Cup Final was a back-and-forth thriller, with the Colorado Avalanche winning a 4-3 contest in overtime over the Tampa Bay Lightning.

Game 2 was … not nearly as thrilling, with the Avs jumping out to an early lead and then pouring it on en route to a 7-0 win.

The series is 2-0 Colorado as the clubs head to Tampa for the next two contests. Here’s what we learned on Saturday night, and how it will impact the rest of the series.

D is for “dominate”

What else can you say, really?

Colorado dismantled Tampa Bay in Game 2. The Avalanche were better in every facet, from 5-on-5, to special teams, to goaltending, to offense, defense, battles, races. You name it, Colorado excelled at it. It was shocking, in a way, to see the Lightning appear so discombobulated. There was no point where Tampa Bay seemed to turn a corner and try something — anything — to stop the bleeding.

The Avalanche kept pushing. The Lightning never pushed back.

What does that mean for the reigning champions as this series shifts to their turf? Has Tampa Bay’s confidence been cracked? Or is it that the Lightning simply don’t have the legs to keep up with Colorado? They wouldn’t be the first team in these playoffs to realize it. Even Connor McDavid had his struggles. The Avs are now 14-2 in the playoffs and have a plus-33 goal differential.

Tampa Bay needs its own stars to step up. Nikita Kucherov and Steven Stamkos haven’t been visible enough. Neither has Victor Hedman. Andrei Vasilevskiy isn’t getting much help, but his struggles are a significant part of the Lightning’s problems.

The Avalanche are rolling as the Lightning are reeling. Will that momentum shift with the series? We’ll find out, fast. — Kristen Shilton

It can’t be overstated enough how uncharacteristic this Game 2 defeat was for the Lightning.

They were 9-2 in the second game of a series dating back to 2020, the start of their back-to-back Stanley Cup run. During that 11-game span, they had never given up more than three goals in a game. Andrei Vasilevskiy had a .938 save percentage in those games; against Colorado in Game 2, he gave up seven goals for a .774 save percentage.

Instead, their start was a disaster. After a good first shit by their checking line, defenseman Erik Cernak fumbled the puck at the blue line. Then the Lightning turned the puck over in their own zone twice, while the referees let a hooking call on the Avalanche against Alex Killorn go. Then defensemen Ryan McDonagh took a hooking penalty just 1:01 into the game, giving the second-best power play in the playoffs (31.3% efficiency) a chance to cook.

It was 1-0 Avalanche on Nichushkin’s goal at 2:54 of the first period, and away they went. — Greg Wyshynski

The Avalanche’s support staff are.

The Colorado Avalanche and Tampa Bay Lightning are facing off in the Stanley Cup Final. You can watch all seven games on ABC, ESPN+ and in the ESPN App.

In Game 2, Valeri Nichushkin was arguably (or maybe inarguably) Colorado’s best player. He was an offensive force, scoring two goals and walking through Tampa Bay’s defenses to nearly score a few more. Andre Burakovsky was all over the Lightning after he scored the night’s first goal. Josh Manson scored off the rush. Darren Helm tallied one off a breakaway.

These are not the big-name stars Colorado is relying on to power through the two-time defending Stanley Cup champions (yes, Makar did score twice in Game 2 but Colorado was already up 5-0 by then). It’s best for the Avs that they don’t need those top-tier players to frequently dominate. The more Colorado continues to neutralize Tampa Bay’s top skaters and receive handsome contributions from every line of its own, the better.

Colorado got Andrew Cogliano back in the lineup on Saturday, but there’s still no word on whether Nazem Kadri will be available in the Final. The Avalanche will continue leaning on their depth in his absence, and those players have been stepping up so far. Avs coach Jared Bednar said before Game 2 that he prioritized keeping Burakovsky in a top-six position and it paid off. Those kinds of instincts for when to elevate players — like Bednar did putting Nichushkin on the team’s top line — will continue to play a major role in Colorado keeping Tampa Bay on its heels. — Shilton

There’s really only one way for the Lightning to slow down the Avalanche attack and that’s to possess the puck more than they can. That would mean fewer chances for the Colorado forwards and more action in front of goaltender Darcy Kuemper.

Instead, the Avalanche had a 60-28 shot-attempt advantage in Game 2. Kuemper’s shutout came with few (if any) dangerous chances.

The bellwether for that domination: The Avs’ top line of Landeskog, MacKinnon and Nichushkin did not allow a shot attempt to the Lightning in 8:43 of even-strength ice time.

Meanwhile, Steven Stamkos had one shot on goal and Nikita Kucherov did not have a shot attempt in the game. — Wyshynski

Colorado generated half a dozen Grade-A chances in the first period alone — and one goal from Manson — from odd-man rushes. It starts with great play through the neutral zone, where the Avalanche are aggressive: they’re breaking up plays, stealing back pucks and making quick passes that spring their fleet-footed skaters in Vasilevskiy’s direction.

Colorado has defensemen (i.e. Manson) who love joining the rush and know exactly when to do it. Helm’s goal is a good example of that too, creating his own odd-man chance just by anticipating when to make the right move and going for it. The Avalanche aren’t ones to hesitate. It’s how they’ve succeeded all season. Colorado’s skaters are so fast, not just on their skates but in their decision-making. There’s a level of anticipation skaters have with one another as a play develops. Colorado is in total sync no matter who has the puck and that’s allowing them to slip behind the (frequently undressed) Lightning.

Clearly, Tampa Bay will have to adjust if they want to go back to Denver for Game 5 (and beyond). The question is how. Colorado has been doing this to teams for three rounds. There’s miles of video to review. But seeing it live on the ice has been a different story. The Avalanche’s confidence should rightly be soaring now too, which will only make the Lightning’s task in containing them that much harder. — Shilton

‘Explosions and calls in the night’: Zelenskyy recalls first moments of invasion and how close Russian forces got to him
Girl, 15, dies and boy, 16, in hospital after stabbing – as teen arrested for murder
London-listed SPAC targets merger with chronic disease drug developer Istesso
How the violent arrest of Tyre Nichols unfolded
Charging patients who can afford it – or free for all? The future of the NHS is under debate