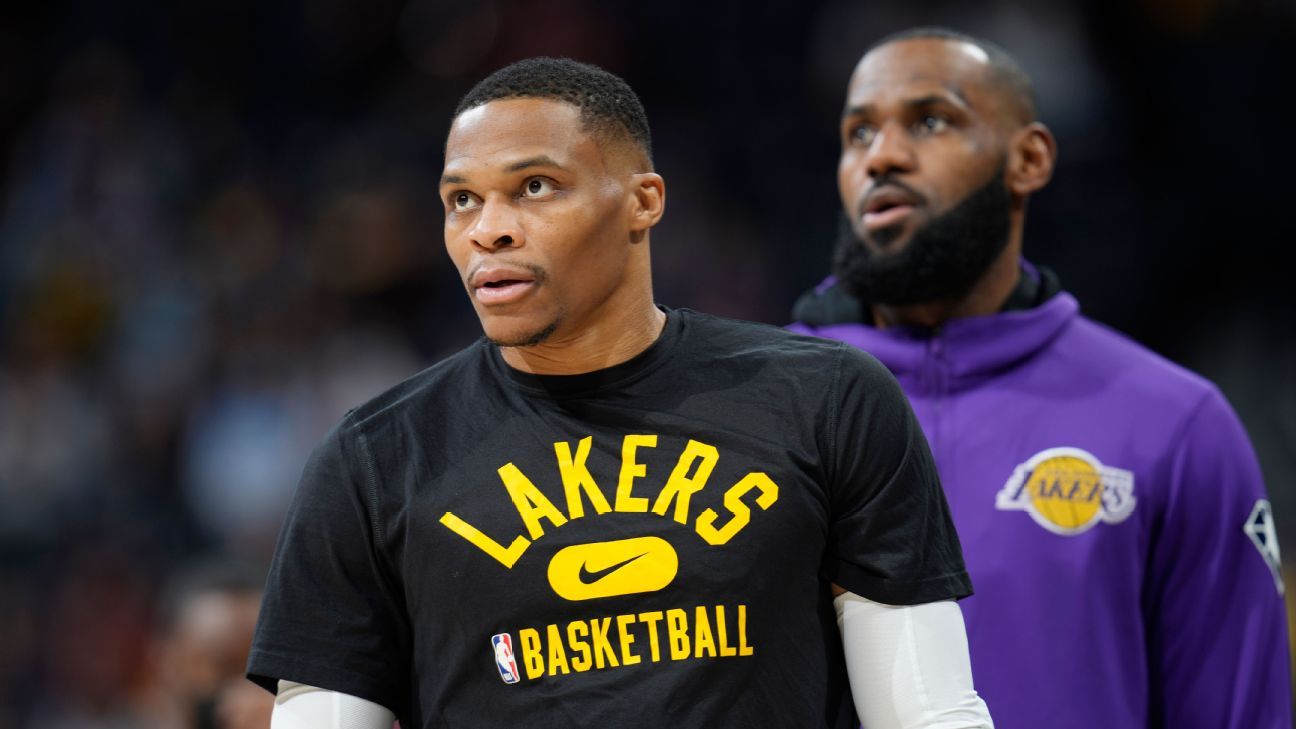 The NBA Finals wrapped up only a few days ago, but The Association’s calendar stops for no one.

This week, the next generation of players will be welcomed into the league when the Orlando Magic begin the 2022 NBA draft Thursday night at Brooklyn’s Barclays Center. From there, free agency and summer league will follow, as teams begin blueprinting how they can catch up to the defending champion Golden State Warriors.

Will some of the biggest names worth watching this summer — including Zach LaVine, Bradley Beal and Jalen Brunson — remain with their current teams? Where is the Deandre Ayton saga headed with the Phoenix Suns? How will the Los Angeles Lakers retool around LeBron James and Anthony Davis after last season’s failed run to the playoffs?

Here’s a look at the top 10 questions facing the NBA heading into what should be, as always, an eventful offseason.

1. How will the Warriors reload for their title defense?

Golden State emerged from two seasons in the wilderness by claiming a fourth title in eight years and reestablishing its dynasty. A fifth title, though, will require some expensive decisions.

Kevon Looney, whose interior defense and offensive rebounding played a critical role in the Warriors’ run, is likely to get a significant raise from $5.2 million in 2021-22. The same could be true for Gary Payton II, the Warriors’ defensive ace who, after years of fighting to gain a solid foothold in the NBA, seems set to get more than the minimum for the first time in his career.

Extension decisions also await the Warriors, specifically with Andrew Wiggins, who has one year left on his deal, and Jordan Poole, who is a year away from restricted free agency. After spending a record $350 million in combined payroll and luxury tax payments in 2021-22, the Warriors are on pace to hit $400 million in each of the next two seasons.

2. How will the Lakers retool around LeBron James and Anthony Davis?

When LeBron came to Los Angeles, he had reached the playoffs in 13 straight seasons. In four seasons with the Lakers, he has now missed the playoffs twice — and L.A.’s 33-49 mark this season was the worst of his career. Changing those fortunes will require a lot of work this summer. It began with hiring former Milwaukee Bucks assistant Darvin Ham to replace Frank Vogel as head coach.

Next up? Figuring out how to fill out a roster that, once Russell Westbrook and Kendrick Nunn opt into their deals, as expected, will be sitting right around the luxury tax line with only six players under contract. (That’s presuming Westbrook will remain in Los Angeles next season, which at the moment seems the most likely path forward.)

Like last summer, the Lakers will be forced to fill the remaining nine roster spots with minimum players and the taxpayer’s midlevel exception. That may not be enough to keep one of their few bright spots from last season, unrestricted free-agent guard Malik Monk.

And by the way, James himself has a decision to make in August: whether or not to extend his contract. If he chooses not to, he can be an unrestricted free agent in the summer of 2023.

3. Which direction are the Jazz headed?

Utah was expected to face a tumultuous offseason after losing to the Dallas Mavericks in the first round, and that began with coach Quin Snyder resigning from the Jazz after eight successful seasons.

Now, following two straight disappointing postseason exits, the focus will shift to how Jazz CEO Danny Ainge will reshape this team in his first full offseason in charge — namely whether that will include breaking up the All-Star partnership of Donovan Mitchell and Rudy Gobert after five seasons together.

Without a pick in Thursday’s draft, the Jazz don’t have many options to dramatically change the roster. And of course, there’s the decision Ainge will make on who will succeed Snyder on Utah’s bench, one of two remaining coaching openings in the league. (Charlotte has the other, after Kenny Atkinson accepted the job last week only to reverse on that decision a few days ago, per ESPN’s Adrian Wojnarowski.)

After 76ers president of basketball operations Daryl Morey was reunited with James Harden at the 2022 trade deadline, it was expected to begin an extended partnership in the City of Brotherly Love.

And while that is still likely to be the case, a disappointing playoff run leaves both sides with decisions. Will Harden choose to opt into his $47 million player option or will he survey the free-agency landscape? Will the two sides agree to a longer-term contract for a lesser number to create some more financial flexibility moving forward?

Elsewhere on Philly’s roster, Danny Green, likely out for all of next season with a knee injury suffered during the playoffs, has a $10 million expiring contract that can be used as a trade chip — along with the No. 23 pick in Thursday’s draft, after Brooklyn opted to take next year’s first-rounder instead as part of the Harden-Ben Simmons trade.

Stephen A. Smith sounds off on Kyrie Irving’s postgame comments on the Nets’ struggles.

Irving and the Nets have the same set of options as Harden does in Philadelphia.

The Nets, meanwhile, have plenty of decisions to make beyond that, as they try to improve on last season’s disappointing first-round sweep at the hands of the Eastern Conference champion Boston Celtics.

Patty Mills has a player option for next season, while one of the team’s best defensive players, Bruce Brown, will be an unrestricted free agent. Nic Claxton, a rim presence at both ends who fills a need in which Brooklyn is in short supply, is a restricted free agent.

The Nets, who must also fill several spots at the end of the bench, are expected once again to be one of the most expensive rosters in NBA history.

6. Will Deandre Ayton remain with the Phoenix Suns?

What a difference a year makes.

In June 2021, the Phoenix Suns were enjoying their first trip to the NBA Finals in nearly 30 years, and Ayton was being praised for his integral role in helping the franchise get there.

But after a second-round exit against the Mavericks thanks to a blowout loss in Game 7 — Ayton was benched for most of that second half — the future of the 2018 No. 1 pick is unclear.

Will Phoenix agree to a sign-and-trade deal with Ayton to reshape the roster and move on from him? Or will he sign an offer sheet elsewhere that would likely lead to the Suns matching?

7. What will Zach LaVine, Bradley Beal and Jalen Brunson do?

The three guards in their mid to late 20s will be unrestricted free agents next month.

LaVine is coming off knee surgery this offseason but is likely to have his choice of max contract offers — though a return to the Chicago Bulls, who traded for him five years ago, seems the most likely outcome. The odds are that Beal will make a similar decision and re-sign with the Washington Wizards once he opts out of the final year of his contract between now and June 30.

The more interesting situation lies in Dallas, where Brunson — a critical part of the Mavericks’ run to the Western Conference finals — will be an unrestricted free agent at 25 years old. After agreeing to a trade for Christian Wood last week, a deal with Brunson could push the Mavericks deep into the luxury tax.

The New York Knicks — a team to which Brunson has many ties, including his father, Rick, who was hired to Tom Thibodeau’s coaching staff this offseason — could make a healthy offer to lure him away. So could the Detroit Pistons, who would provide an intriguing fit for him next to last year’s No. 1 pick, Cade Cunningham.

8. How will the top of the NBA draft shake out?

The top three picks in this year’s draft, per ESPN’s Jonathan Givony, are projected to be Auburn’s Jabari Smith, Gonzaga’s Chet Holmgren and Duke’s Paolo Banchero. The order, however, remains a bit unclear.

Get access to exclusive original series, premium articles from our NBA insiders, the full 30 for 30 library and more. Sign up now to unlock everything ESPN+ has to offer.

Givony projects Smith to be the Magic’s selection at the top, followed by Holmgren going second to the Oklahoma City Thunder and Banchero going third to the Houston Rockets.

After the top three, things get unpredictable in a hurry. The Sacramento Kings, Detroit Pistons, Indiana Pacers, Portland Trail Blazers and New Orleans Pelicans have the next five selections.

9. What will the combo guard market look like in free agency?

Simons is likely to stay in Portland, particularly after CJ McCollum was dealt midseason to clear a spot next to Damian Lillard for him. Sexton’s free agency will be interesting, as he missed virtually the entire season after undergoing meniscus surgery — and Cleveland already has lots of money on its books moving forward.

Both Poole and Herro will be fascinating extension candidates, as they both have played big parts in Finals runs — Poole in Golden State’s title run this year, and Herro helping Miami make the Finals two years ago.

Marcus Spears breaks down why Zion Williamson can be a cornerstone for the Pelicans if his commitment level is high.

10. How many of the top players in the 2019 draft class will be extended right away?

The Memphis Grizzlies and Ja Morant will all but certainly agree to a max contract extension at the start of free agency. But three of the other top five picks in the 2019 NBA draft — Zion Williamson (New Orleans Pelicans), RJ Barrett (New York) and Darius Garland (Cleveland) could have slightly more complex negotiations.

Both Williamson and Pelicans vice president of basketball operations David Griffin have talked about re-signing with New Orleans, but after playing a combined 85 games across his first three NBA seasons — including zero in 2021-22 — there could be some negotiating surrounding potential guarantees in the deal as protections for New Orleans moving forward.

Barrett could become the first Knick to be extended off his rookie contract since Charlie Ward in 1999. Despite Barrett making improvements across his first three seasons, it could be a complicated negotiation ahead for both sides, particularly if Barrett is looking for something close to a max extension.

Garland, on the other hand, will be looking for something in that range after a breakout third season that saw him make his first All-Star Game and finish third in Most Improved Player voting.