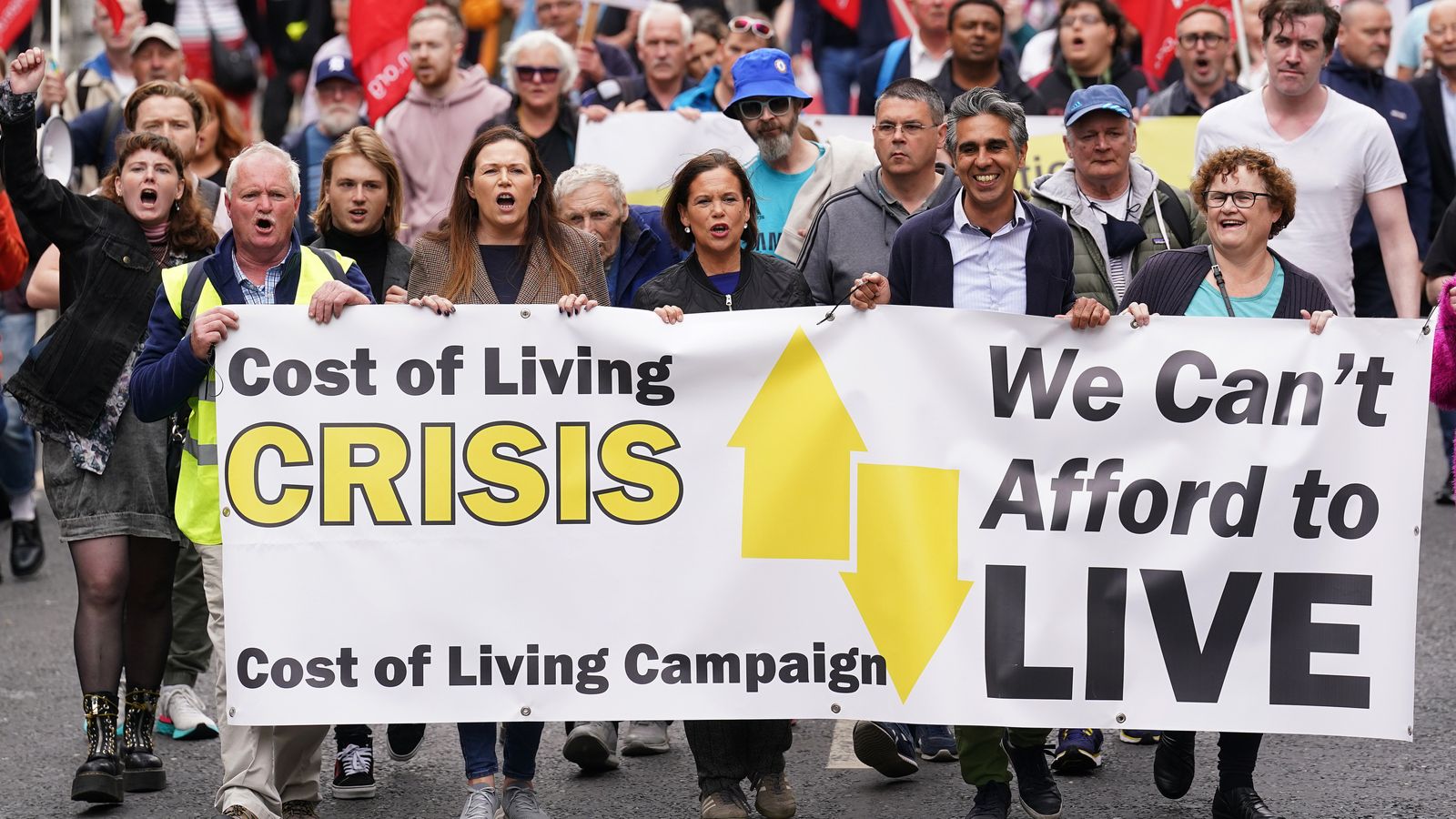 It would be tempting to assume, on the eve of what looks likely to be the biggest rail strike in a generation and amid speculation of a so-called “summer of discontent”, that the UK is somehow unique in being afflicted with poor labour relations at present.

Nothing could be further from the truth.

Governments across Europe are also being confronted with demands from public sector workers for more pay increases that more accurately reflect the rate at which the cost of living is rising.

For example, in the Republic of Ireland, ministers are coming under the same kind of pressure to tackle the cost of living crisis that recently obliged Rishi Sunak, the chancellor, to unveil a £9bn package of extra support for vulnerable households.

Thousands of people took to the streets on Saturday in Dublin, Cork, Limerick, Galway and Sligo in demonstrations and marches, organised by unions and opposition parties, to protest at the rising cost of food, fuel and rental accommodation.

Ireland’s coalition government has to date said that it does not propose bringing in any new support for households struggling with the rising cost of living until the next budget, due in October, in a way that was reminiscent of Mr Sunak’s initial reluctance to add to the relief packages he announced earlier this year.

But there is a growing expectation that Dublin will have to do more before October as it embarks on pay negotiations with public sector unions.

Another example is in Belgium which, this year, has seen several co-ordinated strikes organised by unions across a number of industries.

These have culminated in a national strike today, organised by three unions – the ACV, the ACLVB and the ABVV – affecting the railways and other parts of public transport, forcing Brussels Airport to cancel all outgoing flights on Monday.

Refuse and recycling collections in Brussels and Antwerp have also been hit, as have some child care facilities, while there has also been a mass demonstration that has brought much of Brussels – where only one in four of the main metro lines are running – to a standstill.

Further industrial unrest is expected in the country all summer with some employees at Ryanair recently threatening strike action.

France, whose trade unions are notoriously volatile, is another country expecting to see waves of industrial unrest this summer.

As in Belgium and the UK, the transport sector looks to be most severely affected, particularly aviation. The country’s biggest airport, Paris Charles de Gaulle, has already been hit this month by a strike of security staff that halted a quarter of all flights, with more walkouts planned both there and at nearby Orly Airport due to unhappiness over a proposed pay increase.

French pilots at Easyjet have also been indicating their unhappiness recently.

Another flashpoint in France could be the energy sector, where the CGT union has been calling for strikes at a number of employers, with one major stoppage expected later this week at refineries, fuel depots and petrol stations operated by the oil giant TotalEnergies.

The union has urged all 35,000 of the company’s employees to walk out in protest at the sums it is distributing to its shareholders and in demand for what it calls “an immediate wage increase that responds to the unprecedented inflation”.

With governments across Europe reluctant to agree to major pay rises for public sector workers, lest it create an inflationary wage-price spiral, even Germany – a notoriously inflation-averse nation – is seeing industrial unrest.

Nearly 30,000 steelworkers staged a strike last month in support of their demand for an 8.2% pay rise – inflation in Germany on the consumer prices index measure currently stands at 8.7% – although just last week their union IG Metall, traditionally Germany’s most influential union and which boasts more than two million members, agreed to a 6.5% pay increase phased in over the next 18 months.

While the steel industry often sets a benchmark for other parts of German industry, it is not the only sector to have seen unrest of late, with the country’s ports bracing themselves for stoppages in coming weeks.

A strike by more than 12,000 dockers – the first of its kind in decades – last week brought the ports of Hamburg, Bremerhaven, Emden and Wilhelmshaven to a halt last week in what was intended by the union involved, Ver.di, as a warning to employers as to what could follow if its pay demands are not met.

A strike would add to the paralysis affecting many supply chains across Europe. The same union also staged a series of strikes at Deutsche Telekom last month, involving more than 10,000 workers, while other workers that have been lobbied for strike action in recent months include those working in the insurance industry, airport security and even parts of the Catholic church – although it is currently unclear whether priests have actually set a date to down cassocks.

The Netherlands has also seen industrial unrest in recent weeks and, again, the aviation sector has been in the crosshairs of unions. A strike at Schiphol Airport by baggage handlers was only narrowly avoided earlier this year, but not before hundreds of flights were cancelled, which followed a number of warnings from the FNV union about staff shortages following lay-offs during the pandemic.

The docks sector is another potential flashpoint, with unions unhappy at the backlogs that have built up in both Amsterdam and Rotterdam. Unusually, though, pay has not been the only factor that has come into play this year: Dutch dockworkers staged a protest recently and refused to unload a ship carrying Russian diesel in protest over the war in Ukraine.

Inflation is currently running at 8.8% across the Eurozone – not far off the 9% in the UK – but, in a number of countries, it is even higher. Inflation in Belgium is currently 9.9% while, in the Netherlands, it stands at 10.2%. In the Baltic states, reflecting their close proximity to Russia, inflation stands at 16.8% in Latvia, at 18.5% in Lithuania and at 20.1% in Estonia.

The cost of living crisis is not confined to the UK. Nor, it seems, will a “summer of discontent” – and it is likely that the travelling public, particularly airline passengers, look likely to suffer as a result.