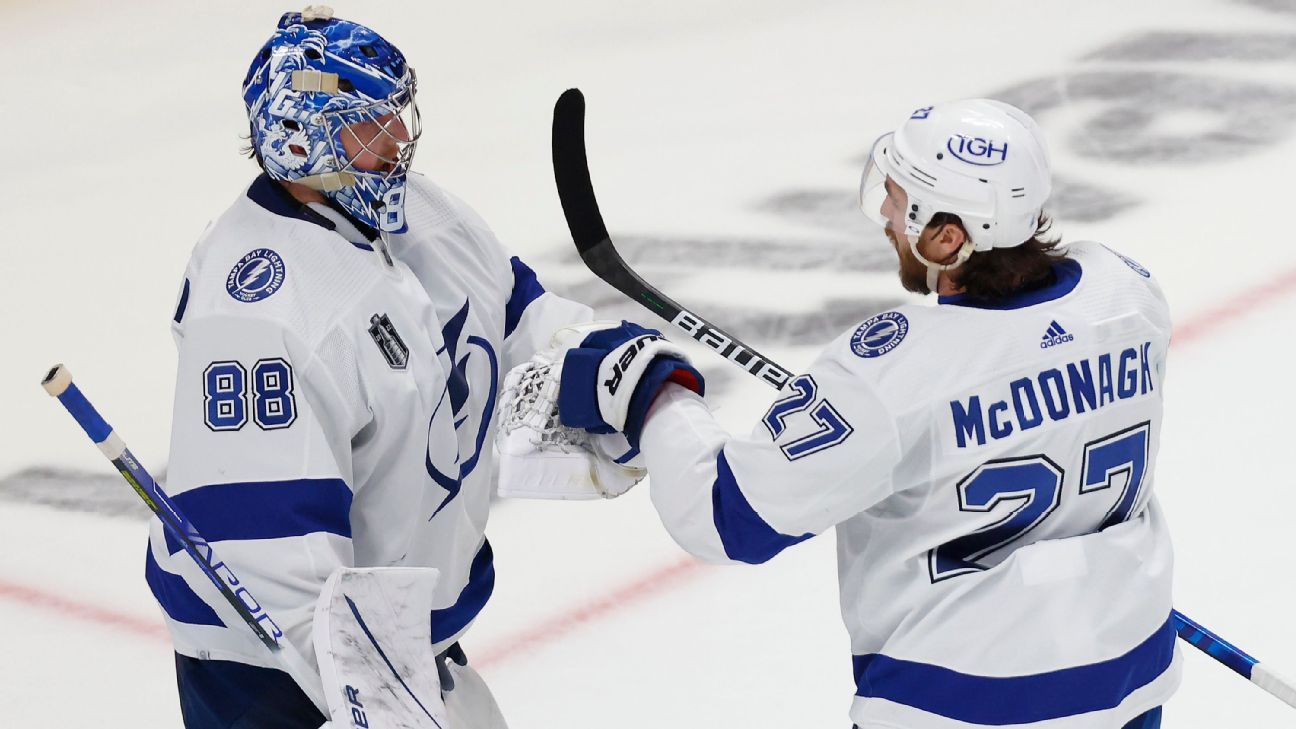 The Stanley Cup was in the building. The fans were buzzing. The Colorado Avalanche were on the precipice of a third championship.

Then the game started, and the Tampa Bay Lightning displayed the resilience that has carried them to back-to-back Cups, and on to Game 6 in their quest for a three-peat. Their 3-2 win shocked some prognosticators, and we’ve got at least one more hockey game this season.

As the series returns to Tampa for the next contest (8 ET Sunday, ABC and ESPN+), here are our biggest takeaways, with an eye on what it all means for the rest of the series.

From agony to irony

The Lightning ended Game 4 at their lowest point in the playoffs. Nazem Kadri scored in overtime to give the Avalanche a 3-2 win and a 3-1 series lead. Coach Jon Cooper noted in his news conference that the Avalanche got away with a too many men on the ice penalty on the play.

“My heart breaks for the players. Because we probably still should be playing,” he said.

The Lightning will play again in Tampa on Sunday night in Game 6, their three-peat hopes still alive, partially because Colorado lost two valuable minutes near the end of the third period, trailing by a goal, because — you guessed it — they were called for too many men on the ice.

You can’t make this up.

That left the Avalanche with just 43 seconds left in regulation to try and tie the game, which they did not. The Stanley Cup remained in its case.

Perhaps the officials took extra notice after being put on notice by Cooper. — Greg Wyshynski

Colorado didn’t clinch a Stanley Cup on home ice. Tampa Bay earned another chance to play on theirs.

The night felt eerily similar to Game 4. The Lightning grabbed the early lead with Jan Rutta‘s first goal of the postseason, and the Avs responded with a Valeri Nichushkin strike in the second.

Then the real back-and-forth began. After a physical second period the third gave way to more speed and skill shining through.

Ondrej Palat‘s go-ahead score was a great example of how the ice had shifted. He got to the net and challenged Darcy Kuemper from in close. 3-2 Lightning. The Avalanche dominated the next couple shifts in the offensive zone to try and come back a final time.

Coach Jared Bednar said before Game 5 that Colorado would have urgency to match what Tampa Bay brought. The problem was that the Avalanche upped their intensity a little too late.

Tampa Bay has a tough building in which to win at the best of times. Now that the Lightning have more life, what will Colorado do to close them out? Just because the Avalanche have two shots at closing Tampa Bay out doesn’t mean they want to extend the experience any longer than necessary.

And Kuemper? He turned in his best performance of the postseason in Game 4. That’s what Colorado will need to match the heat Andrei Vasilevskiy is wielding right now. — Kristen Shilton

The Lightning identified the first 10 minutes of Game 5 as being absolutely pivotal, and rightfully so. In Game 1 and Game 2 in Denver, they were down by multiple goals after the first half of the opening period.

“Colorado, they’ve got a great crowd,” Cooper said prior to the game. “The energy in the building is awesome. They feed off that first five, 10 minutes and you really have to be engaged in your game. Because then they start getting momentum and unfortunately they scored early in these games. So it kind of put us on our heels made us chase the game a little bit. To me that’s a pivotal part of tonight, making sure that we’re the ones trying to do some pushing here instead of them against us.”

The good news for the Lightning was that unlike their first two games in Denver, they were not down by multiple goals by the midway mark of the opening period.

The bad news was that they spent 40% of those minutes on the power play and came away with nothing to show for it, getting just two shots on goal.

The best news: They ended up scoring the first goal at 15:21 of the first period, as Jan Rutta beat Darcy Kuemper cleanly.

Scoring first allowed the Lightning to get to their game and put the Avalanche on notice that Game 5 wasn’t going to have the tilted ice of the first two games in Denver. — Wyshynski

Colorado took a 2-0 lead over Tampa Bay in this series by maximizing their skill and speed.

Game 5 was a good example of how things have changed since then.

The Lightning are not only blocking shots in front of the net and taking away shooting lanes, but they’re a much tighter team through the neutral zone. The harder Tampa Bay forechecked, the fewer answers Colorado seemed to have in the first two periods especially. Even the Avalanche’s breakouts seemed to be affected by the relentless pressure.

So, what’s Colorado going to do about it? The third period of Game 5 may hold some answers.

Where the Avalanche hold an advantage is in their quickness and lack of hesitation moving the puck up ice. Tampa Bay was on its heels against the Avalanche’s speedy transitions in the final 20 minutes.

It wasn’t the only time on Friday that Colorado looked dangerous, but the third period was their best by far because it showcased the speed Tampa Bay has been challenged by most in this series.

If the Avalanche need a road map on how to play in Game 6, they should study that third-period video. The answers are all there. — Shilton

The Lightning’s struggle on the power play has been one of the defining aspects of the series.

The Colorado Avalanche and Tampa Bay Lightning are facing off in the Stanley Cup Final. You can watch all seven games on ABC, ESPN+ and in the ESPN App.

They entered Game 5 having gone 1-for-14 with the man advantage. After the first period, it was 1-for-16.

Then it struck at the most opportune time.

Killorn and Colorado’s J.T. Compher were in the penalty boxes for holding when the ref whistled Makar for a tripping penalty. That gave the Lightning power play what it needed: a 4-on-3 man advantage. With that time and that space, the group calmed down and Kucherov’s goal gave Tampa Bay a 2-1 lead.

It was worth the wait. — Wyshynski

If Makar has been Colorado’s expected star in the Cup Final, then Nichushkin has been the Avalanche’s surprise performer.

He’s appeared to get better every game, and stood out again on Friday.

Not only did Nichushkin net Colorado’s first goal to tie the game 1-1 in the second period, but he used his big body to push the Lightning off pucks and try to match Tampa Bay’s physicality in the middle frame. Nichushkin’s four goals also leads all skaters in the Cup Final.

Nichushkin is a tenacious forechecker and continues to elevate his play in that realm. He was stealing pucks back in the offensive zone to hold the line and keep plays alive, while too many of his teammates gave pucks away in the neutral zone.

That was also Nichushkin creating a 2-on-1 rush chance late in the second period. He was everywhere for the Avalanche.

It’s hard to say what exactly has changed so positively for Nichushkin in this Cup Final. But it’s clear a sleeping giant has awoken. In the absence of Andre Burakovsky and with Nazem Kadri still clearly not 100%, Nichushkin’s contributions have been all the more noticeable. Can he continue to be that difference-maker as the series shifts back to Tampa? Momentum is on the Lightning’s side now. The Avalanche will look for big-time performances from consistent performers like Nichushkin. — Shilton

Earlier in the playoffs, a reporter asked Pat Maroon about the value of Ondrej Palat as an unsung playoff hero — a player who isn’t a star but comes up big.

The Big Rig bristled at the suggestion. “Who says he’s not a star? You? We think he’s a star.”

In the playoffs, he’s basically a superstar. Palat’s goal at 13:38 of the third period gave the Lightning a 3-2 lead. It was his 11th goal of the playoffs, most of them quite impactful. The first goal in Game 6 against the Maple Leafs. The empty-netter to close out the sweep against the Florida Panthers. His three-game goal streak against the New York Rangers in which he scored all three in the third period — two of them game-winners.

Then the season-saving tally for the Lightning in Game 5 in Denver, to keep the three-peat hopes alive.

At this point, he’s a Conn Smythe candidate. — Wyshynski