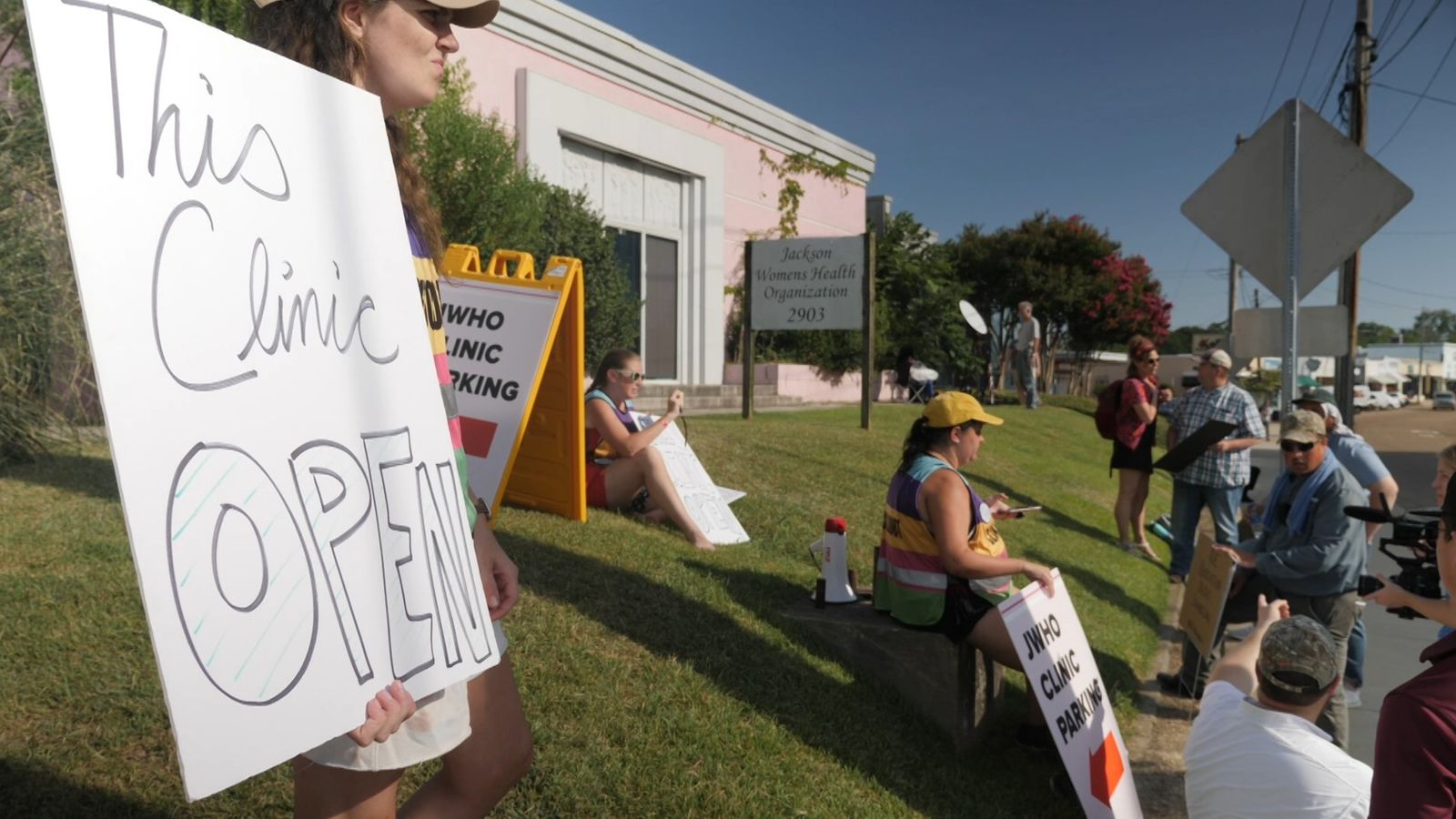 On the corner of a street in Jackson, Mississippi, America’s reckoning with abortion is up close and raw.

The entrance to the car park at the Jackson Women’s Health Organisation is always an intense place. But today it’s on another level.

As cars pull in with patients arriving for appointments, anti-abortion activists offer direct and unsolicited advice.

“Don’t let them kill your child…”

“Would you love that little baby and have mercy on it?”

“The Bible says that the body without the spirit is dead…”

The Pink House, as it has become known, is the only abortion clinic still functioning in the state of Mississippi.

Within days, once the governor here signs the law to ban abortion, it will be forced to close.

In the surrounding states – Louisiana, Alabama, Oklahoma, Missouri, Arkansas and Kentucky – all clinics have already closed.

And that is why the car park at The Pink House is so busy. This is the consequence of the Supreme Court judgment.

Choices are now being made and deeply personal procedures being undertaken in a rush, not just to meet a deadline of biology but of law.

Support volunteers in multi-coloured vests are on hand to guide the cars and the patients through the gauntlet of protesters.

I watch as anti-abortion protester Doug Lane shouts his interpretation of the Bible through a car window.

The protesters are still here, despite their victory at the Supreme Court, offering God and a choice between redemption or hell.

I ask Doug if this is really appropriate behaviour towards women with such personal choices to make.

“You think it’s intimidating them? What we hope it’s doing is pricking their conscience,” he said.

“We believe that the child in the womb is a human being created in God’s image and that to destroy that life is murder.”

Another protester, Brian, is as direct.

“They’re murdering babies inside this pink house here. People need to be prosecuted, justice needs to be upheld now,” he says.

“Hell is going to be hot and forever.

“So we lift our voice like a trumpet and preach the gospel.”

The Supreme Court’s legal ruling, which has now profoundly shifted America’s social fabric, all started here at The Pink House.

The clinic’s battle with the state of Mississippi wound its way through America’s court system. This year it finally reached the highest court in the land and the desks of its nine justices.

The Supreme Court, with its Trump-appointed ultra-conservative majority, sided with the state on Friday and in doing so, overturned a woman’s right to choose; a right which had been enshrined in the US Constitution for 50 years.

“How can they take states’ rights away saying everybody can carry around a gun but then turn around the federal rights away from women and turn it back to the states? Doesn’t make any sense.”

He looks angry but deeply upset too.

He pauses, then adds: “I hope everybody enjoyed the constitution we had for 250 years because we don’t have it anymore. I’m done.”

Outside the front of the clinic I meet Pattie D’Arcy who has travelled up from New Orleans to express her support for a woman’s choice.

“Louisiana has already closed,” she says.

“Women are going to die. I’m not being just being dramatic. It’s really scary.”

The decision at the Supreme Court in Washington DC is prompting profound questions for the country about its unity, stability, its democracy, but here where the impact will be so great, the questions are more fundamental. It’s about choices over health and life being taken away.

Away from the melee, I meet Natalie Collier. She is founder and president of The Lighthouse: Black Girl Projects, a charity which supports some of the poorest and most vulnerable people in this city.

“This is a conversation about control,” she tells me.

“Black women who are historically poor, live in communities that don’t serve them well, are going to bear the brunt of it,” she says.

I ask what happens now.

“It’s about finding ways to subvert the system to take care of folks in communities,” she says.

“It’s about doing things… I am trying to find a better way to say take care of people illegally if that’s what needs to be done.”

And that’s the nub of it. The consequence, in the end, will be to drive abortion back underground.

For good, or ill, the Republican Party has placed itself in the orbit of Donald J Trump – Adam Boulton analysis
Genetic Evidence of Typhoid and Plague Causing Pathogens Found in DNA of Ancient Civilisations
Bohemian noble family redefines modern aristocracy by selling NFTs to preserve and share a 700-year-old legacy
Sam Bankman-Fried’s crypto firms had deep ties to Voyager Digital and its bankruptcy wipeout
Digital Tool Shown to Be Effective in Helping People Reduce Alcohol Intake on Their Own: Details