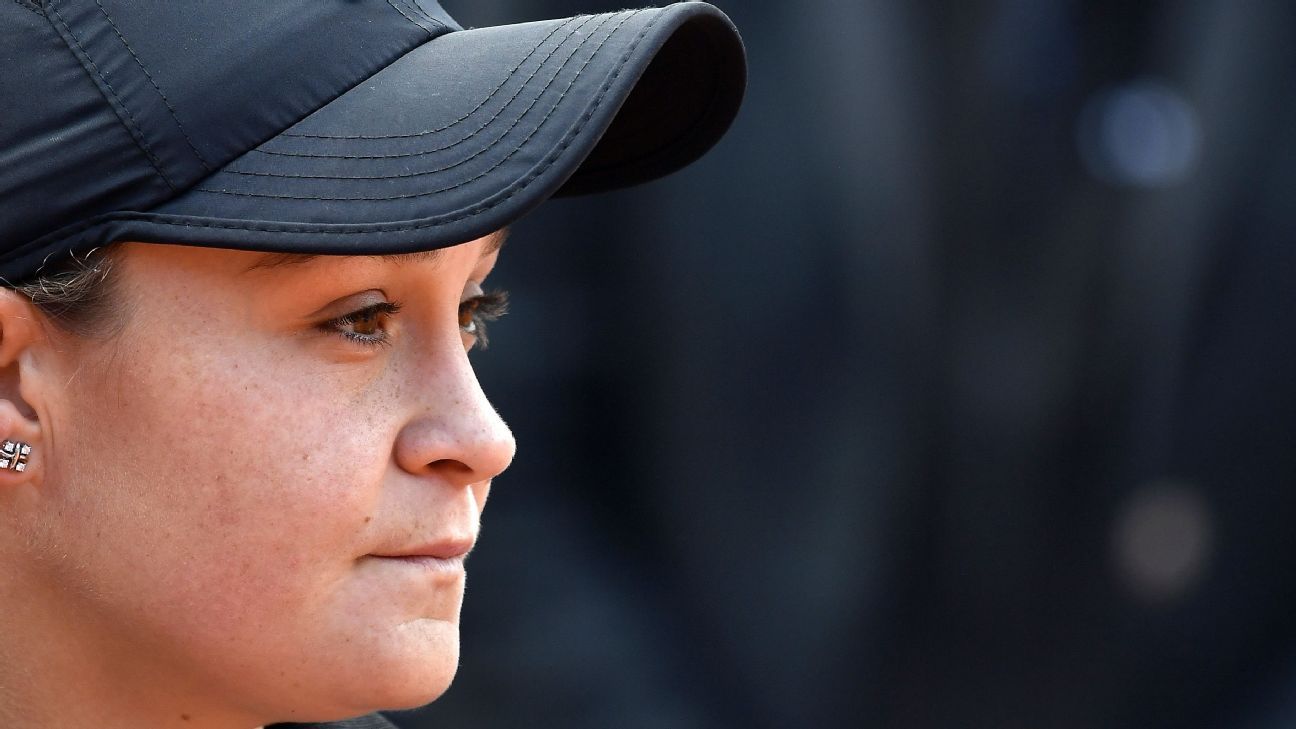 LONDON — Much of Wimbledon is synonymous with tradition. There are the usual sounds of champagne corks popping, dress codes, sunburned patrons, strawberries and cream and excessive amounts of Pimm’s No. 1 being consumed.

Then there are other traditions: The defending men’s champion opens play on Centre Court on Monday, while the reigning women’s titleholder does the same on Tuesday.

Instead of soaking up the adulation of Centre Court at the All England Lawn Tennis Club, she’ll be playing golf in New Jersey alongside Michael Phelps, Brian Lara and Harry Kane. It was in March when Ash Barty, then 25, made the sport-shifting decision to retire from tennis as she entered her 114th straight week as world No. 1.

So instead of Barty, it’ll be Iga Swiatek opening the play on Tuesday on Centre Court. Though she still loves the sport, Barty is unlikely to attend the tournament this year — according to sources — as she continues to explore and enjoy her life post-tennis.

THERE WERE JUST 50 days between Barty winning the Australian Open and her retirement announcement but the decision had been brewing for a while. She had first talked seriously with close confidants about retiring after she won the 2019 French Open, but still there was this life-long dream of triumphing at Wimbledon that kept her going.

After realizing that goal in July 2021, those closest to her knew her interest in the sport had waned. Coach Craig Tyzzer said he knew he was fighting a losing battle in keeping the star motivated while they were in Tokyo for the Olympics. There she won the doubles, but crashed out in the first round of the singles to then world No. 48 Sara Sorribes Tormo, with Tyzzer saying at her departure press conference it was a “hard slog to keep [Barty] involved … there wasn’t much left in her, [the] motivation wasn’t there.”

But she raised herself for one last shot at winning the Australian Open in front of her home support and family in January 2022. The Melbourne crowd had been waiting 44 years for a women’s singles champion and on Jan. 29 she ended that drought after an incredible tournament where she didn’t drop a single set and was broken only once on serve.

As she stood at Rod Laver Arena having beaten Danielle Collins 6-3, 7-6 (2), in the final, she knew in herself that nothing would ever match that feeling — it was her “full-circle moment,” as she put it.

While those closest knew it was likely the end, publicly she was still targeting events. She spoke in March of wanting to play in the Billie Jean King Cup in April, though she pulled out of Indian Wells and Miami to get “her body right,” having not recovered from the Australian Open.

And then on March 22 came the six-minute interview on her Instagram channel with longtime friend and former doubles partner Casey Dellacqua, where she announced her retirement. Barty said it was the right time to “chase other dreams,” with the double-triumph of Wimbledon and Melbourne cementing that itch to try something new.

“I know how much work it takes to bring the best out of yourself and I’ve said it to my team multiple times, it’s just I don’t have that in me any more,” Barty said. “I don’t have the physical drive, the emotional want and everything it takes to challenge yourself at the very top of the level anymore. I just know that I am spent — I just know physically I have nothing more to give. And that to me is success. I have given absolutely everything I can to this beautiful sport of tennis.”

In the days after her announcement, she did one 20-minute press conference in Brisbane and was asked about her plans. She answered: “You have to wait and see …. I’m not giving you everything right now. … It’s all right. … You can be patient. … Patience is a virtue.”

She said she was an “open book” without secrets — yet revealed few plans at the news conference — but frequently mentioned how she was looking forward to the next chapter as “Ash Barty the person, and not Ash Barty the athlete.”

THE WTA TOUR is brutal — a grueling 44-week experience where you barely set foot at home. Though she said in her departure press conference she has never been a “prisoner” to the sport, for so long she’d been governed by the schedule.

In 2011, at age 15, she won the Wimbledon junior championship. Just three years later she stepped away from the sport with burnout and played professional cricket for two years. Tennis drew her back, but after her great success, she’d had enough.

Make your picks and compete for a chance to win $1,000! Make Your Picks

Nestled in the midst of her departure interview were glimpses into what she has missed by being the world’s best tennis player. She missed her family, she wanted to see her nieces grow up, and she wanted to be around her dogs. She has a fiancée — professional golfer Garry Kissick with the two engaged last November — and they’ve built a house beside the Brookwater golf course just outside Brisbane.

So Barty’s future would be on her terms — away from the public eye, letting the world in only when she wanted to. And she had plans.

At the end of February Barty visited Uluru in her role as Tennis Australia’s First Nations ambassador. She took her Australian Open trophy there — connecting to her roots and looking to use her influence to grow the sport.

Barty is proud of her aboriginal Australian ancestry.

Giving indigenous youth more opportunities to get into the sport is central to her plans. “I have always wanted to have the time to contribute in other ways — I’m ready to really give back, that’s what lights me up inside,” she said in her retirement press conference.

The impact from that trip in February has already been felt in the Northern Territories. “There’s been quite an uptake in club tennis since her visit,” Beth Caird, Tennis NT’s inclusion and diversity manager, told news.com.au. “People were really inspired by a world No. 1 coming to the NT right off an Australian Open win. She was seen as an Indigenous leader.

Barty will also publish a series of six children’s books in July, titled “Young Ash,” which she hopes will inspire “new readers.” The books are partly inspired by Barty’s 5-year-old niece, Lucy .

It all comes back to what Barty said in her retirement news conference, about the importance of being present with those closest to her and feeling part of her country again. So it’s unlikely we’ll see her embark on another grand tour in another sport.

Since she retired, some wondered if she was going to head back to cricket, given how successful her first foray was. Meg Lanning, the Australia women’s captain, said on April 6: “If she wants to come and have another crack at cricket [we] would certainly be interested in talking to her. She was pretty good at [it] last time she played.

Golf remains one of her huge passions. On April 2, Barty picked up another trophy at the Brookwater Golf and Country Club ladies’ event. First place earned her $20 — her career tennis earnings came to $23.8m. At the time Barty said she’d had a “good laugh” about the speculation she was heading into golf professionally. This is despite her getting the definitive seal of approval in 2019 when Tiger Woods saw her playing at a pro-am and said: “She’s got a great swing, are you kidding me?”

WHEN THE SECOND round gets underway at Wimbledon, Barty will be at the Liberty National Golf Club in New Jersey playing in the ICONS golf series event. She’ll be on the World team captained by Ernie Els and playing alongside cricket’s Brian Lara, boxing’s Canelo Alvarez and football’s Harry Kane and Pep Guardiola among others, facing the America team skippered by Fred Couples and featuring Michael Phelps, Michael Strahan and Ben Roethlisberger.

“I hope through my participation in the series that we can encourage more women and girls to participate in golf around the world,” Barty said. She’ll be at St. Andrews for the Open in July as a guest of the R&A. But expect those sightings to be fleeting for the time being, rather than becoming the norm.

As for a sign of where she’s been happiest, look at what she said on April 10. As she talked through the launch of her new books, she was asked about whether she’d had any regrets about retiring. “I am just so happy,” Barty said. “I have spent so much time with my beautiful family and my nieces and nephew and you could not wipe the smile off my face the last few weeks.”

Her short- to long-term plans include building out her charitable focus and ways in which she can contribute to youth sport in Australia, sources told ESPN.

In November, she will release a memoir that has been provisionally titled: “My Dream Team: A Memoir of Tennis and Teamwork.” It will shed more light on the retirement decision and what lies ahead. There’s still that competitive spirit in Barty, but as she wrote in a recent column, while the tennis fire will always burn, don’t expect to see her back on Centre Court anytime soon. She’s too busy enjoying being “just’ Ash Barty.”

“Is it forever? The door to my career is closed at the moment, and firmly. … But I do hold the key to the padlock and who knows what the future holds,” Barty wrote in her CodeSports column.

She went on: “But before anyone goes rushing to buy tickets to the 2023 Australian Open in the hope I might be back to defend my title, hold your horses. I am certain my future lies elsewhere.”

‘I was sad for the institution’: Nancy Pelosi speaks out about McCarthy speaker vote
California gunman identified as ‘distrustful’ ballroom dancing fan
Nadhim Zahawi : ‘It’s obvious Zahawi can’t stay on’ – Labour leader
‘Explosions and calls in the night’: Zelenskyy recalls first moments of invasion and how close Russian forces got to him
Memphis Police appeals for calm ahead of release of bodycam footage after five officers are charged with murder of Tyre Nichols