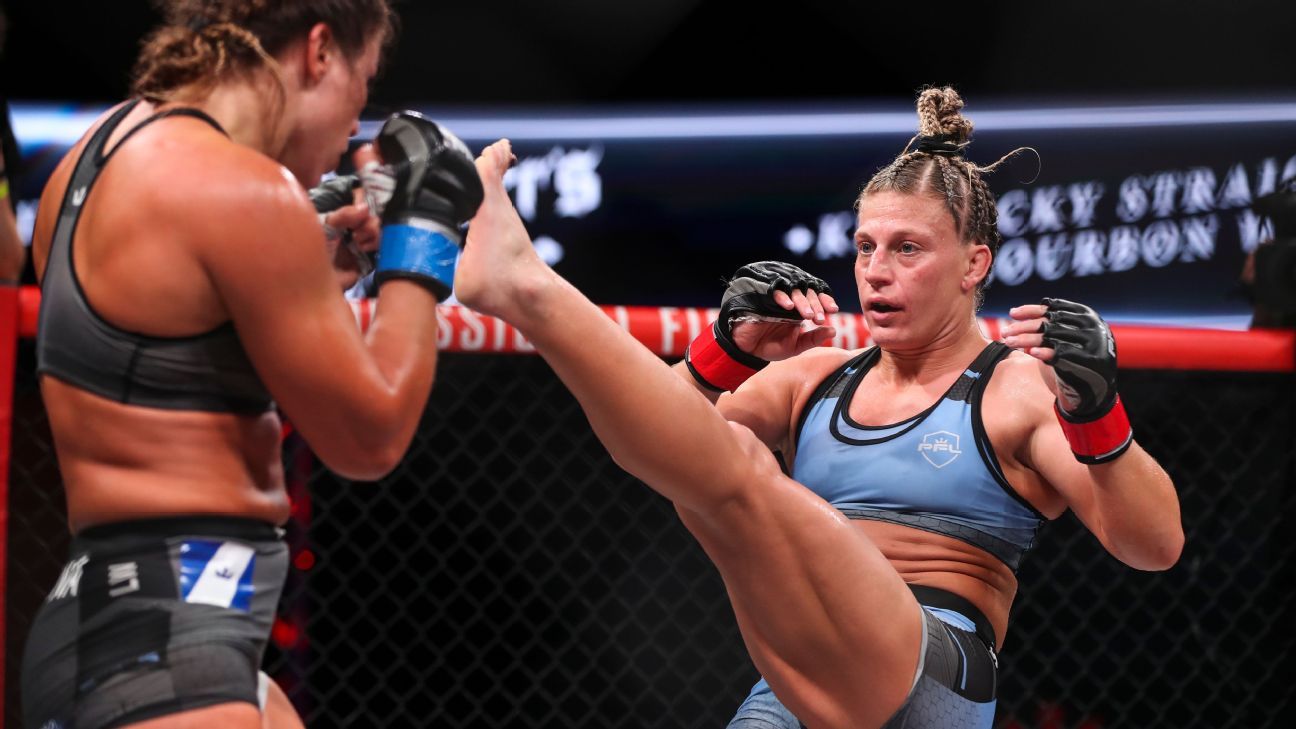 With the playoff seeding set for four of the six weight classes in the PFL, all eyes turn to welterweight and women’s lightweight divisions. Both weight classes will have their second and final regular-season fights of the year this Friday at PFL 6 (main card on ESPN/ESPN+ at 8 p.m. ET, prelims on ESPN+ at 6 p.m.).

Kayla Harrison, the promotion’s biggest star, will take center stage at Overtime Elite Arena in Atlanta in the main event against Kaitlin Young, who steps in to replace former Bellator champion Julia Budd. Harrison is one of four lightweights (along with Martina Jindrova, Olena Kolesnyk and Budd) with three points and can lock up a spot in the playoffs with a win.

Monday through Friday, host Pablo Torre brings you an inside look at the most interesting stories at ESPN, as told by the top reporters and insiders on the planet. Listen

In the co-main event, Rory MacDonald, the only welterweight with six points entering Friday’s card, takes on Sadibou Sy. MacDonald enters the fight following a first-round submission of Brett Cooper at PFL 3. Also on the card is two-time PFL champ Ray Cooper III, who missed weight in his first fight and will be looking to right the ship with a must-have win over Brett Cooper.

There’s still much to sort out. Here’s how I see Friday’s fights playing out, along with playoff scenarios calculated by the PFL.

In order to secure a spot in this season’s PFL playoffs, Harrison will need to secure a finish in her fight against the crafty veteran Young. Young, who is primarily a striker with decent takedown defense, has plenty of experience in the cage in all types of fights. But once Harrison gets close, she will take this fight to the ground, and it should be only a matter of time before Harrison gets the finish. With the win, Harrison would once again be the favorite to win the title.

What Harrison needs to make the playoffs: A finish in any round.

What Young needs: A win to stay alive.

MacDonald looked like the dominant version we expect to see out of the veteran in his last fight. Look for him to take the same approach he did last season against Curtis Millender — take the fight to the mat. MacDonald will have the major advantage there. Since he was able to get a first-round finish in his first fight of the season, there’s no pressure for him to get a finish here — any win will get him in.

What MacDonald needs: A win of any kind; a finish in any round clinches the No. 1 seed.

What Sy needs: A finish in any round.

For either fighter to have a chance to get into the playoffs, a first- or second-round finish is needed. Ray Cooper III, last season’s champ, missed weight in his first fight and followed that by dropping a decision to Carlos Leal. Assuming Ray Cooper III comes in on weight, I expect him to take the fight to Brett Cooper early and get a first-round KO/TKO finish.

What Ray Cooper III needs: A first- or second-round finish to stay alive.

In a similar situation to last season, Magomedkerimov missed the first fight of the season and will need a first- or second-round finish in order to advance to this season’s playoffs. Last season, he had a favorable matchup against an opponent who was primarily a striker with no answer to his ground attack. This time around he has a very well-rounded opponent in Zeferino, who wont be as easy to submit.

I still like Magomedkerimov here, even if it’s a win by decision. He is the better striker, and if he can get top position, he can control Zeferino on the ground. If he wears him down enough, it can open up for a submission.

Despite missing weight, Fabian was able to get the upset win over Julia Budd. Fabian showed good takedown defense and striking as she took over the fight in the second and third rounds. Pacheco continued her winning ways with another first-round KO in her last fight. Pacheco appears to be in the best physical shape of her life, and even as a world-class grappler, her striking is becoming a major threat. Look for Pacheco to get the win here as she has the tools to stand or take the fight to the ground, where she will have a major advantage.

What Fabian needs: A first- or second-round finish to stay alive.

What Pacheco needs: A win of any kind; clinches the No. 1 seed with a finish in any round.

We first saw Al-Silawi land a flying knee in the Challenger Series to earn his PFL contract. Then he got a close decision win over veteran Gleison Tibau. However, in that fight, we saw Al-Silawi have issues defending the takedown. If that continues, he will have a very difficult time against Umalatov. I expect Umalatov to use his striking to close the distance, then get a takedown early. Umalatov needs a finish to have a chance at the playoffs, but if he doesn’t get that done, I expect his wrestling to dictate the fight and get him the win.

What Al Silawi needs: A finish in any round.

What Umalatov needs: A finish to stay alive.

Leal returns to the PFL smart cage after getting the biggest win of his career over last season’s champ, Ray Cooper III. In that fight, we saw a variety of striking and an excellent style of fight management from Leal. I expect a similar fight here as he takes on Aleksakhin, who is primarily a striker. Look for Leal to use his striking to close the distance and take the fight to the floor, where he will have a major advantage. Leal could be the wild card of the division if he can secure another dominant win here.

What Leal needs: A finish in any round.

This is a must-win situation for both fighters. In her PFL debut, Montes showed that she has solid wrestling and power in her hands. Unfortunately for her, Mokhnatkina, a sambo world champion, has more experience and is the better striker. I like Mokhnatkina here to utilize her sambo background and get the fight to the ground, where she should be able to earn herself the win and a potential spot in the playoffs.

What Mokhnatkina needs: A win to stay alive.

What Montes needs: A win to stay alive.

Jindrova put on a striking clinic in her last fight against Vanessa Melo. I expect nothing less in this fight. Jindrova will be the better striker by a large margin. If she can press the action early and avoid wild punches, this should be a relatively easy win for Jindrova.

What Jindrova needs: A stoppage in any round.

What Fayzallanova needs: A win to stay alive.

In what looks to be a striking battle, Kolesnyk will look to get the win for a spot in this year’s playoffs. In her last fight, Kolesnyk drastically improved her striking and her head movement. If she can do the same here, I believe she can earn a decision win over Melo.

What Kolesnyk needs: A stoppage in any round; it moves her into first place, pending later results; a decision win would put her in second, pending other results; a loss does not eliminate her. .

What Melo needs: Cannot clinch a playoff spot in the fight, but moves into first place with a stoppage by 1:24 of Round 1, pending latter results; eliminated by a loss.