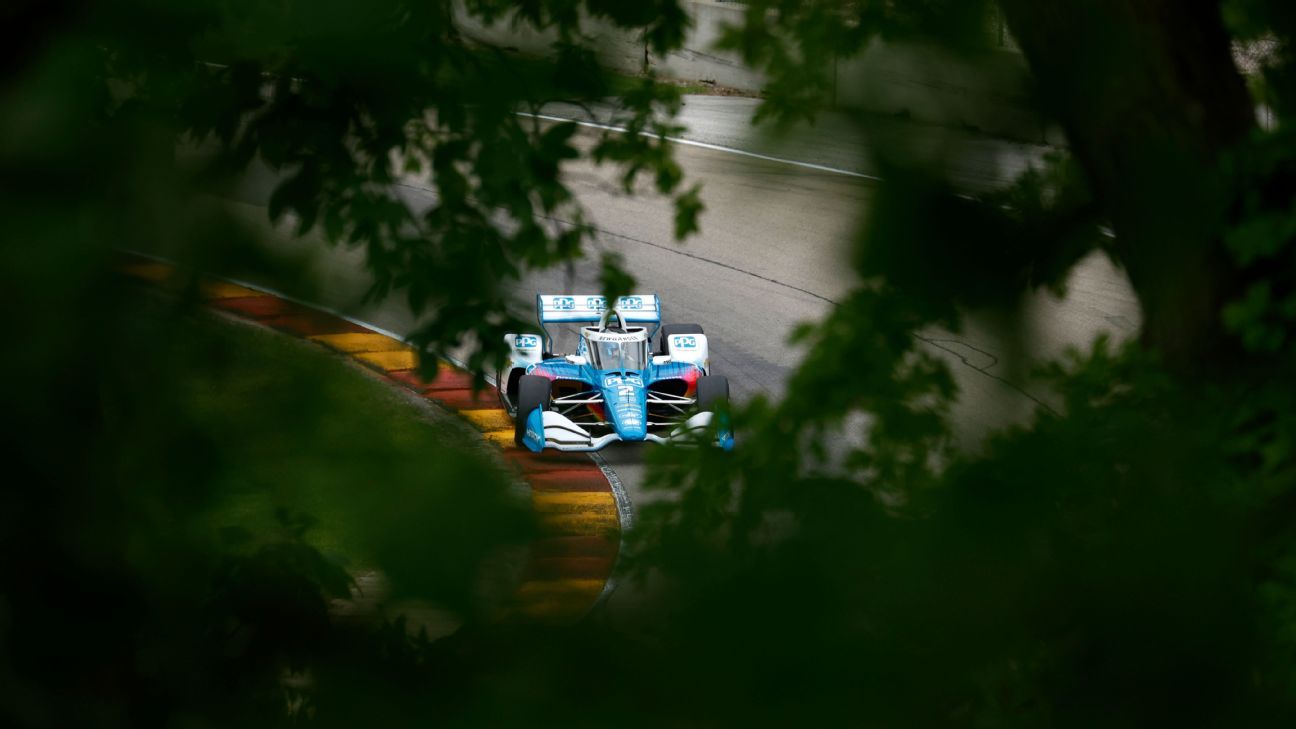 Sir Jackie Stewart stood on a platform overlooking the entrance of Miami International Autodrome’s Turn 6. You know the one. The broad lefthander that swept around a flotilla of yachts that weren’t floating at all, anchored in fake water in a football stadium parking lot that, oh yeah, also featured a tiny little bit of asphalt deterioration at the fringes of that turn, ragged edges produced from the recently poured and not entirely cured blacktop.

Some furor was raised over those “pebbles” that turned out to be much ado about nothing. The fake marina? In old-school Formula One circles, it was portrayed as only slightly less offensive than spray painting the Eiffel Tower purple. Even after the checkered flag waved at a successful Miami GP, making lots of people lots of money, the race and the place became the spark of a spirited, not new but certainly much louder debate in the motorsports community.

“Racing in the cities is exciting because people are already there. You don’t need to excite the people, because in the first place, they are already close,” four-time F1 world champion Sebastian Vettel said after Miami. “But certainly from a racing and driving thrill [perspective], I’d love to go to proper tracks.”

“I understand that this might not be everyone’s cup of tea because it isn’t a traditional circuit,” Stewart said as he watched Porsche Sprint Challenge machines hammer their way by the boats, tires screaming. “But perhaps there is room on the true racer’s plate for this and that?”

Over the motorsports month of June and now looking ahead into early July, that plate is indeed full, with a spaghetti pile’s worth of right- and left-hand turns over road courses of all types. F1 just raced through the city park streets of Montreal and this weekend will be on the nearly 75-year-old Silverstone Circuit of Great Britain (stream live on ESPN). IndyCar started its June on the city streets of Belle Isle in Detroit and next weekend will be in the rolling hills of Mid-Ohio. The NASCAR Cup Series began the month snaking its way through the permanent curves of Sonoma Raceway and this weekend will race where IndyCar was two weeks ago: perhaps the crown jewel of American “proper” road courses, the four-mile, 14-turn, 67-year-old masterpiece in Elkhart Lake, Wisconsin known as Road America.

– Watch Formula One and the W Series all season long on ESPN
– Don’t have ESPN? Get instant access

It’s the circuit Vettel called out by name when he lamented the investment made in Miami while “proper” tracks of the U.S. were overlooked.

“If someone asks you, ‘Hey mate, what does a true road course look like?’ you would show them this place,” explained Scott Dixon, six-time IndyCar champion and a two-time Elkhart Lake winner, in 2017 and 2020. “It’s fast, but it’s technical. You have to pick your spots to make a move, but you also have to earn that opportunity. It’s also just beautiful country, with so much history. You still have kind of grass next to the track and walls, so it’s high risk, high reward, which is how it should be. That term, ‘proper’ road course, this is it.”

For the auto racing uninitiated, an explanation. There have always been two different types of road courses. Now there are three.

The first of those is a “proper” circuit. These are standalone, purpose-built racetracks, carefully designed and laid out no different than Donald Ross or Jack Nicklaus would construct a golf course. They hit a long checklist of standard challenges such as esses, elevation changes, passing zones and zones that tempt one to pass even if it’s not such a great idea. These courses come packed with signature corners and straights.

Road America’s very name was born from this mindset, as civil engineer Clif Tufte, he who is immortalized in bronze at the entrance to the racetrack, designed the turns of his facility based on curves and paths that he discovered while driving around the countryside of Wisconsin and beyond. The roads of America.

“The way Road America is set up, it gives every racecar — stock cars, IndyCars, sports cars — really good room to race, speed in the corners and openness in the corners,” said Andy Lally, who has raced there countless times in NASCAR and sports cars. The oft-called road course “ringer” will compete in this weekend’s Xfinity Series race with SS Green Light Racing. “There has to be the right combination of factors, and even the way that corners connect. It really sets up for positive racing. It lets you battle.”

Lally talked about a place with “a hugely fast approach to it” as he discussed lengthy braking zones, those areas where cars slow down enough to be overtaken by faster machines.

“You can poke your nose in, take a look, make that downshift, and get that thing sorted,” he said. “Road America has that. It’s always had that. It’s character built over time, and even as we’ve gotten faster, that still remains. That’s a ‘proper’ road course, when people use that term.”

The second is a street circuit, temporary layouts that include existing city streets. This is where all motorsports have their roots, as the very first car owners instinctively set out to determine who had the fastest automobiles and most daring constitutions, racing through the city streets and country roads of Europe, starting with Paris to Rouen in 1894.

The crown-jewel examples of such circuits have long been the Monaco Grand Prix, with F1 machines sliding around casinos and through tunnels, and Long Beach, the F1-turned-IndyCar course that sends racecars streaming by a yacht-packed marina (a real one) and screaming around an aquarium. Concrete barriers and temporary catch fencing galore, with paddocks packed into parking lots. Passing is typically at a premium. Creature comfort takes a backseat for a few days, but the carnival atmosphere makes it all worth it.

“I think a series needs both, honestly,” explained Jimmie Johnson, who left his full-time NASCAR career just as the Cup Series went road-course crazy, but now races in IndyCar and sports cars on every type of circuit there is. On Sunday, he finished sixth overall at Watkins Glen International in IMSA’s Six Hours of The Glen and also revealed that he is openly working to secure a seat for next year’s 24 Hours of Le Mans. “The driver’s experience I think leans more toward a natural road course. A city circuit has an energy about it that can’t be replicated, I think it benefits the fans more, but I think that energy is also loved by the drivers.”

The third, and this is a relatively new concept, are the rovals, road courses shoehorned into oval racetracks and incorporating large chunks of those high-banked oval turns. Forms of this have existed for years (see: the layout of the 24 Hours of Daytona) but only recently arrived on the NASCAR Cup Series calendar via Charlotte Motor Speedway in 2018.

Take a ride with @alexanderrossi for a lap around America’s National Park of Speed during practice 1.

“I don’t know if a roval counts as a ‘proper’ road course because it isn’t 100% a road course and I’m not even sure if ‘proper’ is even a term we should ever use in racing,” joked Ryan Blaney, who won the inaugural Charlotte roval event. “But I do know that it’s fun. Guys enjoy it. The history of this series will tell you that the words ‘road racing’ and ‘fun’ weren’t in the same sentence in the garage for a long time.”

In 1972, when the then-Winston Cup Series reshaped its “Modern Era” calendar to 30-something events per year, they ran two road races, both at now-gone Riverside International Raceway. That number stayed at two through the 2017 season. In 2018, that moved to three with Charlotte’s fall transition to the roval. Last year that tally jumped to seven, including the first Cup race at Elkhart Lake since 1956. Now NASCAR is openly looking to add a street course in the very near future, possibly at the expense of Road America’s spot on the schedule.

Meanwhile, after nearly two decades of adding custom-built “cookie cutter” venues — destinations with strikingly similar comforts both in the paddock and on the track — to its all-road course schedule, F1 is reportedly eyeing a very aggressive calendar expansion, adding a street venue in Las Vegas beginning in 2023 that will incorporate the Strip, and other potential pop-up street-based locations everywhere from New York to Nice, France.

“To be honest, I have been to Vegas, and I didn’t really like it. I think it’s too busy and people misbehave. I’d rather go to Bathurst,” Vettel said earlier this month, speaking of the legendary 84-year-old Australian track, home of turns such as Hell Corner and The Cutting, that last hosted Grand Prix racing in 1958. “Take the cash we’ll take to Vegas and invest it in great tracks that already exist. That would be a real challenge.”

In NASCAR’s never-ending quest to produce nonstop drama, they keep looking toward more road racing, and the solution feels more and more like street and roval additions. As F1 continues to ride this unprecedented sudden surge in popularity, it seems to be leaning into its trend of follow-the-money new facilities and temporary street courses.

But for the folks behind the wheel, they want to be challenged as racers and they don’t want the posers to be let off the hook so easily. It’s what Dixon said about Road America, with grass and walls and not a whole lot of room in between.

“Whether it’s a street course that’s poorly planned or what you will hear guys refer to as ‘F1 cookie cutter’ tracks, the newer stuff today, when you just make a gigantic parking lot and just paint a racetrack around it, there’s a reason why that sucks,” Lally continued. “It’s because building up to 100% is one the greatest talents of being a real racecar driver. If you have a corner that isn’t forgiving and you’re coming to it at 170 mph, if you drop a wheel, you’re going to pay the price for that. You’re going to go off and spin. It doesn’t have to be 100% destruction of your car, not an injury, but something bad. A lesson. A penalty that says, ‘you can’t do it like that.'”

Giant concrete run-off areas and chicanes made of little more than road cones and thrown-down rumble strips become the real-life equivalent of playing Gran Turismo on one’s gaming system with all the damage controls turned down to zero. Every lap is a throw-caution-to-the-wind lap.

“You drive it in there at 105% and go over the line and all you get is a warning over the radio, right?” Lally said, laughing. “You drive through it, try it again at 104%. Same thing. 103%. Same. By the time you dial it down to 100, you’ve have five tries to drive like a complete idiot with no repercussion to you, but everyone else is at risk [by your driving] and you’re still out there. Road America, Watkins Glen, Road Atlanta — what was your term, ‘proper’ road courses? — they don’t put up with that. They make you race.”

Which is the point of all this, right? To race.

“You want to be challenged, you want to be where everyone has to compete like real racers, and you want to feel like you belong where the greats have been,” Stewart said on that day in May, watching Porches run door-to-door around a Miami marina covered in crystal blue vinyl images of water. “Yes, it is a lot to ask for, but as racing drivers we always ask for a lot. If a circuit can provide those feelings and those challenges, then it doesn’t matter where it is.”