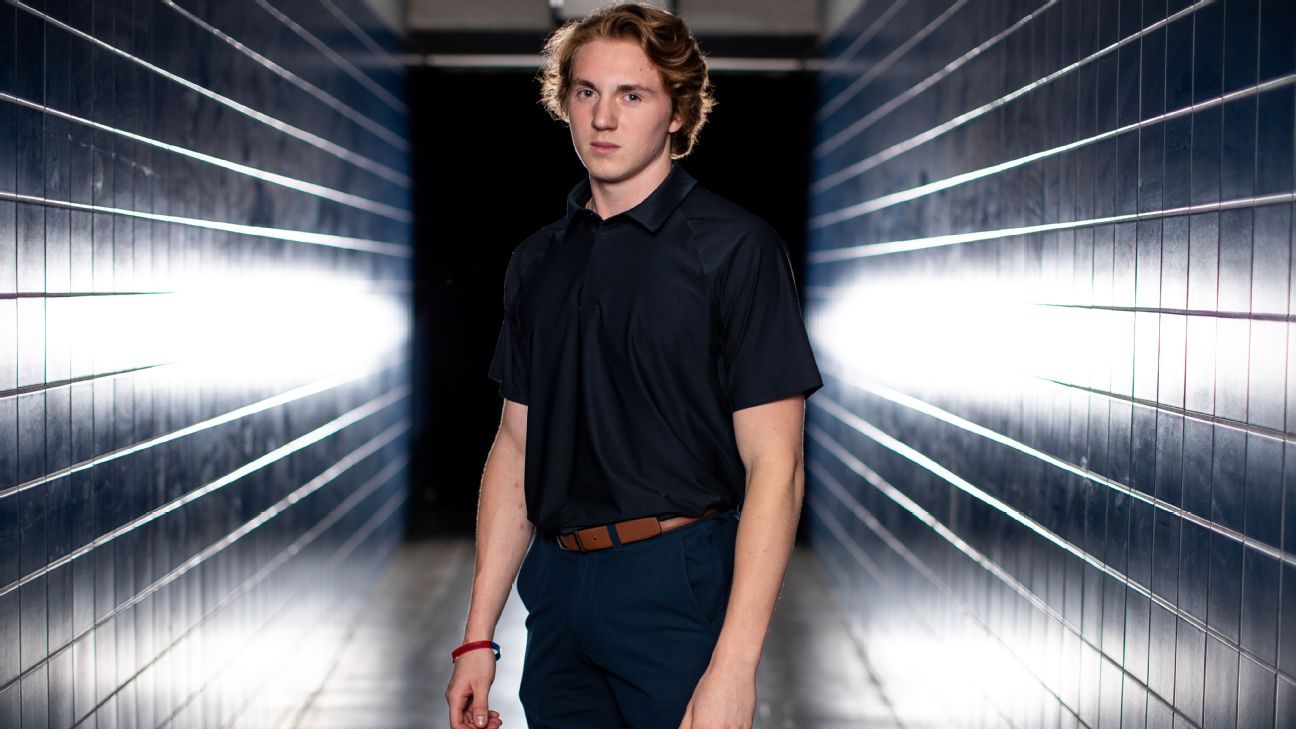 Growing up in Pittsburgh as an Alex Ovechkin fan wasn’t always easy for Logan Cooley.

“I definitely got a lot of hate for that,” said Cooley, an 18-year-old center for the U.S. National Development team and a top 2022 NHL draft prospect. “I was a big Ovechkin fan. Loved the way he played. Loved the way he scored goals. I just saw him on the Caps and became a big Capitals fan.”

Cooley was the only Capitals fan in his friend group deep in the heart of Pittsburgh Penguins country. Which made things awkward when the Penguins seemed to have their rivals’ number in the playoffs — until they didn’t.

“Definitely a lot of heartbreak for Caps fans. But 2018 was a good year,” Cooley said, referencing the postseason when Washington went through the Penguins en route to winning the Stanley Cup.

His Ovechkin fandom could be interpreted as a symbol of rebellion or a failure of indoctrination. Cooley actually got his start in hockey thanks to Ovechkin’s nemesis, Sidney Crosby.

“He started off as a Sidney Crosby’s Little Penguin, as part of the ’04s [birth year], the first group we had,” said David Morehouse, former president of the Penguins and the executive who helped start Crosby’s youth hockey program in Pittsburgh.

Crosby approached Morehouse with his desire to create a program that would enable local athletes who couldn’t afford to play hockey with the opportunity to play it. The two sat down for lunch at a Pittsburgh Marriott and mapped it out: Crosby was with Reebok; the Penguins had Dick’s Sporting Goods as a team sponsor; and both the captain and his team were willing to front their own money.

“Sid didn’t grow up a rich kid. For him, it was important to take away a lot of those financial barriers so kids can try the game he loves so much,” said Morehouse.

The executive and his captain pushed both sponsors to eventually cover every piece of equipment the players needed — from head to toe, including their jersey and a gear bag.

“I remember when we first printed the jerseys, the idea was that all the players would wear different numbers,” Morehouse said. “But everyone wanted 87. So every jersey had Sid’s number on it.”

“I always kind of grew up around hockey,” Cooley said. “My parents decided to put me in [the Little Penguins] and ever since then I’ve loved the game.”

He had two uncles who played Division I college hockey. Both of his brothers played — his older brother Eric competed for Ohio State this past season.

“I was the first to do the Crosby program. I don’t remember too much because I was around 4 years old,” Cooley said. “They gave you free equipment, the chance to skate around and have fun out there. That’s what I really remember. And then any time you had Crosby out there and you learn from one of the best players in the world, that’s pretty cool at such a young age.”

Cooley said the program didn’t lean too heavily into anything Crosby was doing on the ice.

“I think everyone at that time was just trying to stand up on their skates,” he said. “But [Crosby] meant a lot. Any time you could have a chance to learn from Crosby it’s great. I got a chance to watch him every night in Pittsburgh. Just seeing how he is as a person and as a player.”

As a player, Cooley emulates Patrick Kane more than he does either Crosby or Ovechkin. He’s listed at 5-foot-10, same as Kane.

“Him being the same height as me, I watched how he used his skill to maneuver around bigger guys,” Cooley said. “How good his hockey IQ is. Such a fun player to watch. I definitely took stuff from him and used it in my game.”

The NHL today is much friendlier for a player of Cooley’s size than it was when Kane was selected first overall by the Chicago Blackhawks in 2007. Cooley ticks off the names of undersized stars such as Johnny Gaudreau, Jack Hughes and Trevor Zegras who excelled this season.

In the case of Zegras, he excelled as a rookie while populating the highlight reel, which is something Cooley noted.

“He’s a guy that when Anaheim is on, you’re watching him,” he said. “Especially as a fellow USNDT guy. The passes he’s pulling off. The Michigan that he’s doing. He’s not afraid to try anything out there and I think I’m that kind of player, too.”

The U.S. National Development program has hit the board with high frequency in recent NHL drafts. Luke Hughes went No. 4 to the New Jersey Devils last year, while Tyler Boucher went No. 10 to the Ottawa Senators. Jake Sanderson was No. 5 overall to Ottawa in 2020. The Devils took Jack Hughes at No. 1 in 2019, while the Los Angeles Kings selected Alex Turcotte at No. 5.

Cooley firmly expects to be a top-three selection in the NHL draft next week, with the first round set for Thursday night in Montreal (7 ET, ESPN).

Montreal has the top pick, followed by the Devils and the Arizona Coyotes. If center Shane Wright goes No. 1 as many still expect, would Cooley know where he’s headed?

“I don’t know. Does New Jersey want a winger or …?” Cooley pondered. “I honestly have no idea. Arizona has showed a lot of interest. But it’s tough to say right now.”

A seven-part, behind-the-scenes docuseries going on and off the ice and in locker rooms for an all-access pass during the pursuit of the Stanley Cup. Watch on ESPN+

He admits that he has kept his eye on the mock drafts being published leading up to the first round.

“I’d be lying if I said I didn’t,” he said. “But it’s something that you can’t pay too much attention to because it can get in your head and mess with your game. Now that the season’s over, nothing really going on, you can look at them a little bit more.”

With those mock drafts come scouting reports on Cooley’s game, which he’s reading with interest if not taking them to heart.

“You’re always going to want to look at the mostly good stuff,” he said. “But there are some people who say my two-way game is bad, little things like that. So you have some mixed feelings. But it doesn’t change me as a player.”

There are aspects of his game he’d like to improve before he’s drafted. “Getting stronger. Getting harder to move off the puck,” Cooley said. “I want to continue to work on my two-way game, becoming even better defensively. And then my shot. Being able to score from farther out. Those are the three things I’m working on to become an even more impactful player in the NHL.”

Some of that work might happen at a new Pittsburgh-based summer league in which Cooley is participating.

Minnesota has “Da Beauty League.” Pittsburgh didn’t have a summer league for its NHL players, so the GOAT League started this summer. Cooley has played in a couple of games. Vancouver Canucks center J.T. Miller, Carolina Hurricanes center Vincent Trocheck and Buffalo Sabres center Zemgus Girgensons are among the NHLers participating.

Miller holds the distinction of being the highest-drafted player from the Pittsburgh area, having gone 15th overall to the New York Rangers in 2011.

“Not for long,” Miller told the Penguins website, referencing Cooley. “I hear he’s going pretty early, so I’m happy for him. I hear he’s a heck of a player and I’m excited to be watching him. It’s good to see all the talent still continually coming out of Pittsburgh.”