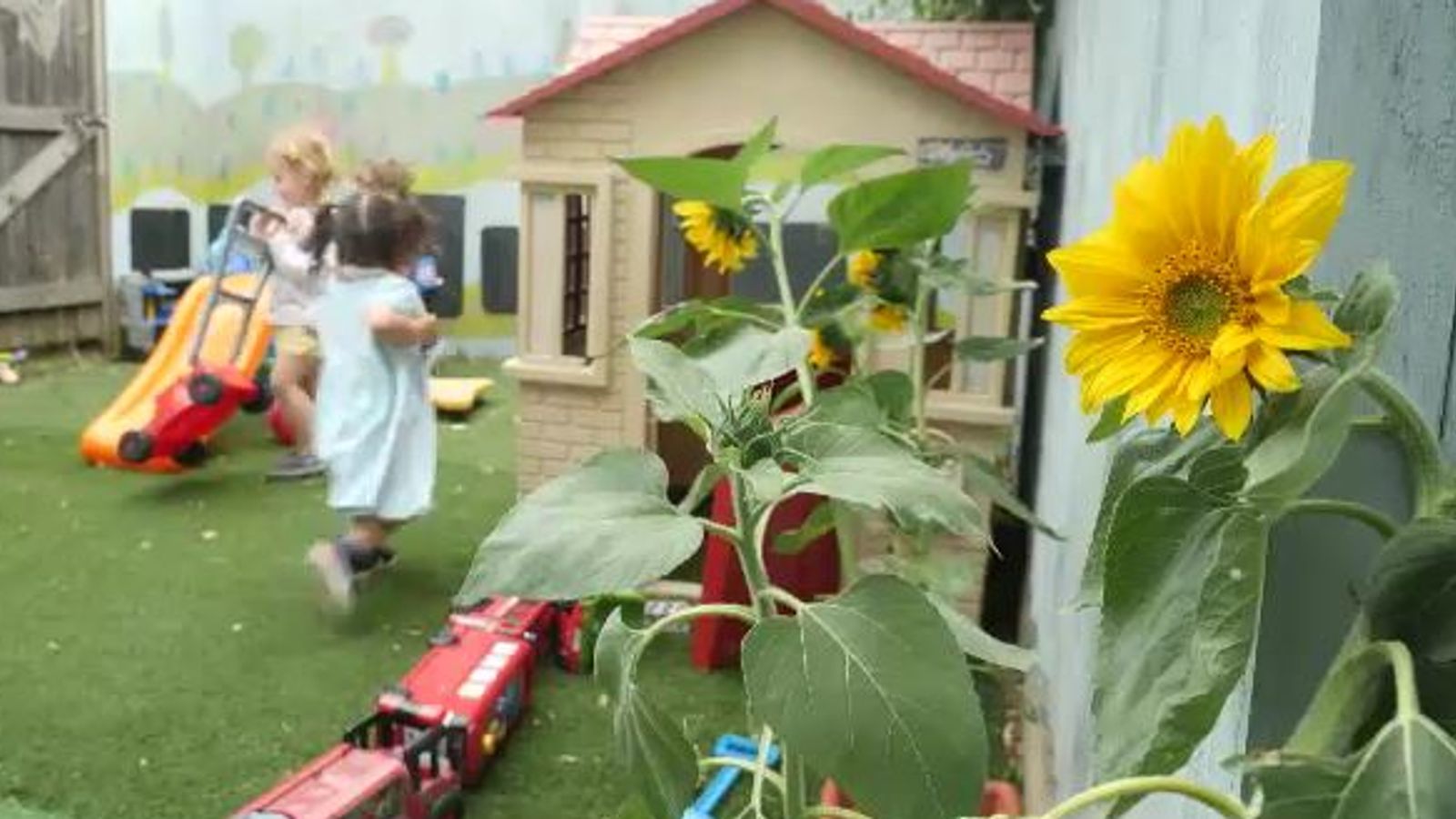 A shake-up of childcare rules will be announced this week, aiming to save money for hundreds of thousands of families by allowing staff to look after more children.

The government plans to increase the number of two-year-olds who can be cared for by one adult in a nursery from four to five, billed as helping parents with the cost of living.

It is claimed the England-only move could eventually save families up to £40 a week – or 15% – for those who pay £265 a week for a two-year-old, if childcare providers take it up and pass on the savings to parents.

But the sector say this is highly unlikely to be the case, and children’s minister Will Quince told Sky News the ratio changes alone would not be a “silver bullet or panacea” for family finances in the short-term.

Speaking during a trip to Paris where he visited French nurseries that operate a higher ratio of staff to children, the Tory frontbencher sought to reassure parents that childcare providers would not be forced to adopt the changes.

He said: “If I thought it would compromise safety or quality, I would not be doing it.

“I was being pushed by some in and out of government to look at much bolder ratio reform, but I’ve said quality and safety is our priority.”

Childcare in the UK is among the most expensive in Europe, with the care for the youngest children the most costly.

In France, where the legal ratio of adults to children is one to eight for two-year-olds, the average price for full-time care is £511, or 26% of the average wage, according to figures published by the Organisation for Economic Co-operation and Development.

Childcare in France is heavily state-subsidised and staff must all be fully qualified, which is not the case in the UK.

Mr Quince visited a council-run creche in central Paris to hear about the system, but insisted the reform proposed in the UK would be far more limited.

Referring to the French ratio, he said: “That would be a step too far for a number of reasons, and what we are proposing and consulting on is actually a considerably smaller and minor change.

“The ratio change in itself is no silver bullet or panacea or magic bullet, it is not going to significantly change costs, because what we don’t expect is settings to routinely or religiously go to one to five.

“Most don’t currently go to one to four.

“This is more about flexibility and it’s important to stress that this is part of a much wider package.”

The government have also been focusing on trying to increase the take-up of tax-free childcare, which 1.3 million families are eligible for – up to £2,000 a year.

The childcare sector is bitterly opposed to the ratio changes, which they say will put staff under pressure and that any costs saved by having more children are unlikely to be passed on due to years of underfunding.

The changes being proposed are more limited than those suggested by Liz Truss when she was childcare minister in 2013 and proposed one adult for every six two-year-olds.

A backlash from nurseries and parents saw the plans shelved.

He said: “There’s no case for it whatsoever.

“The problem we have in early years is nothing to do with the number of staff, it’s down to the fact that the sector has been grossly underfunded for decades.

“What’s more, such a policy would do little, if anything, to lower costs for parents.

“We know that the vast majority providers plan to keep their ratios as they are, regardless of any regulation changes, in order to maintain quality levels – and even if a minority did relax their ratios, any savings would be used to recoup years of historic losses, not lower fees.”

She said she would be unlikely to follow the new ratios.

“Whether it’s naptimes, mealtimes, taking them to the park, someone’s had an accident, one adult to four children is a lot,” she said.

“I honestly can’t find a single childcare provider, a single parent, anybody who actually thinks this is a good idea, it would be an absolute disaster.

“The more children we have, the less time we have to spend on their personalised learning, their development, at every angle it just doesn’t make sense.”

She said parents pay her the equivalent of £7 an hour for a 10 hour day.

Keilly Swift, whose toddler attends the nursery, said the monthly payments are “a huge drain on our finances, although this is not a particularly expensive nursery”.

But she said: “I don’t think making the people in charge of my children and giving them the best possible care more burdened, with more stress and extra workload.

“It doesn’t seem like the right way to achieve lowering the costs.”

Mr Quince said Boris Johnson had taken a strong personal interest in the issue, because high childcare costs were holding back women, in particular, from the workplace.

He added: “I’ve spent many occasions over the past ten months meeting with settings and speaking with individual providers and those who work in early years have said actually a little more flexibility on occasion would actually be helpful.

“Also when I speak to parents and they say ‘Well we do need the places and we need to go to work and we want our child educated, we don’t want to be let down last minute and if that means giving settings just that little bit more flexibility around one to five instead of one to four on occasion’.

“This is a legal cap, a maximum, it’s not a target, it’s not something we want settings to aim towards.

“It’s about giving those settings the flexibility and the autonomy to make the decision about what’s right in terms of quality and safety for their setting.”

Scotland already has a ratio of one adult to five two-year-olds, but in Wales it is one to four – currently the same as England – and there are no plans to change it.