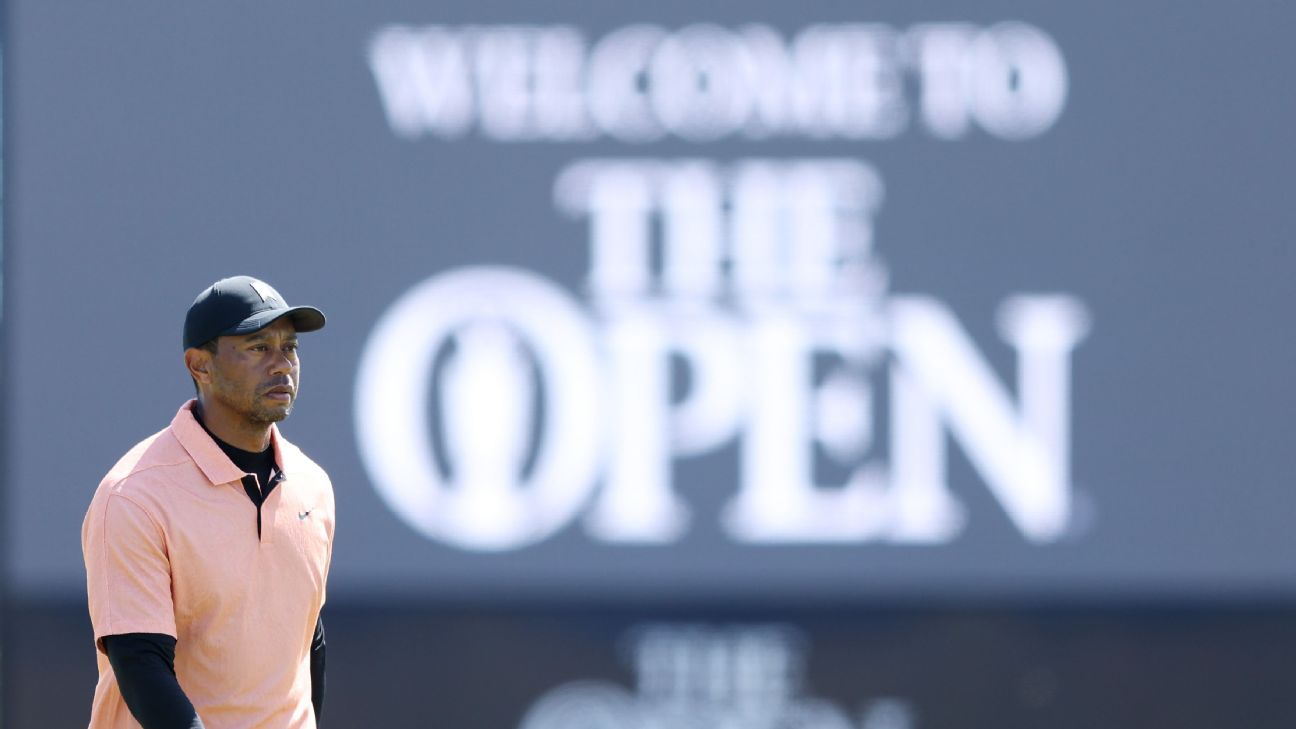 ST. ANDREWS, Scotland — Tiger Woods, a 15-time major champion, called St. Andrews his “favorite course in the world” when he announced he’d be playing in the 150th Open after his return to competitive golf at the Masters in April.

There’s plenty of reason for Woods to love it. He claimed his first Claret Jug here in 2000, when he won by a whopping 8 strokes and completed the career grand slam. His 19-under total over 72 holes was a record for any major. Remarkably, he didn’t hit a single shot into a bunker. It was his second of four straight major titles in what became known as the “Tiger Slam.”

Five years later, Woods arrived at St. Andrews ranked No. 2 in the world — behind Vijay Singh. Woods hadn’t won a major in each of the previous two seasons and was retooling his swing under new coach Hank Haney. But Woods grabbed the first-round lead with a 6-under 66 and never looked back in a wire-to-wire win. It was his 10th victory in a major championship.

That brings us to this week, when Woods will be at the center of any discussion. But there other storylines, too. We take you through the biggest ones of the week:

What can we expect from Tiger this week?

It’s clear his game isn’t anywhere close to what it used to be, as he continues to recover from serious injuries in a car wreck on Feb. 23, 2021. He has played only seven rounds of competitive golf this season, which included his worst scores at the Masters and PGA Championship. Given where he was just 17 months ago, it’s probably more notable that he made the cut in those two majors, even if he had to withdraw after 54 holes of the PGA Championship at Southern Hills because of pain in his surgically repaired right leg.

Make your picks and compete for a chance to win $5,000! Make Your Picks

Woods, 46, seemed to wonder if this would be his last go-around in The Open at St. Andrews.

“This is a pretty historic Open that we are going to be playing,” Woods told reporters in Ireland last week. “I’m lucky enough to be part of the past champions that have won there, and [I] want to play there again, and I don’t know when they are ever going to go back while I’m still able to play at a high level. I want to be able to give it at least one more run at a high level.”

Given Woods’ current health and the fact he skipped the U.S. Open because of problems with his right leg, it’s a surprise that he walked 18 holes on both Saturday and Sunday. Woods and Justin Thomas walked 18 holes on Saturday night, mostly chipping and putting, and then they played a full practice round less than 12 hours later Sunday.

St. Andrews isn’t as hilly as Augusta National or Southern Hills, but there’s plenty of undulation for Woods to navigate. The ground is also especially hard. Will it be an easier walk for him?

“I can see both sides,” Thomas said. “It’s definitely flatter, but it’s definitely quirkier. You have a lot more weird steps. But he’s the only one who can answer that.”

The LIV Golf/PGA Tour controversy has dominated the season, but the R&A is hoping it takes a break at The Open this week. So much so that R&A officials didn’t invite LIV Golf CEO Greg Norman, a two-time Open winner, to the Celebrations of Champions or champions’ dinner in St. Andrews this week.

There will still be plenty of LIV players in the field, including former Open winners Phil Mickelson and Louis Oosthuizen and runner-ups Dustin Johnson and Sergio Garcia.

“I could say a mouthful of me being defending champion, 150th Open, at St Andrews,” Morikawa said at the Scottish Open. “Tiger Woods is playing again. I mean, does it get better than that? It’s tough. It’s tough to beat that.”

Most of the LIV players have seen their world rankings slide since the first LIV event in London on June 9 to 11. Mickelson has tumbled from 72nd to 92nd, Johnson has gone from 15th to 18th and DeChambeau has dropped from 28th to 33rd.

On Sunday, the Guardian of London reported that LIV Golf officials were planning to “demand its formal recognition in the world rankings” during a board meeting of the Official World Golf Ranking on Wednesday.

McIlroy finally get his chance

Rory McIlroy, ranked No. 2 in the world, didn’t get an opportunity to defend his Open title when the event was last played at St. Andrews in 2015 because he was forced to withdraw after suffering an ankle injury while playing soccer.

In 2010, McIlroy matched the lowest round in a major with a 9-under 63 in the first round at St. Andrews.

McIlroy goes into this one having played some of the best golf of his career. He has finished in the top 10 of each of the three majors this season: solo second at the Masters, eighth at the PGA Championship and tied for fifth at the U.S. Open.

It’s a great spot for him to end his major drought. He has played in 29 majors since winning his last one at the 2014 PGA Championship.

“I can’t go into The Open approaching it like I’ve got unfinished business at this golf course,” McIlroy told TheOpen.com. “You know I feel like there’s enough pressure on me anyway without putting more on myself. But it’s one that I’ve been looking forward to for a long, long time.”

Can Scheffler find his form?

Scheffler, the No. 1 player in the world, is well on his way to earning PGA Tour Player of the Year honors. He won four times in six starts this spring, including his first major at the Masters in April. He hasn’t won since then, but did tie for second at the Charles Schwab Challenge (losing to Sam Burns in a playoff) and tied for second at the U.S. Open.

Scheffler missed the cut at the Scottish Open last week, the second time he wasn’t around for the weekend in his past six starts. He had never played St. Andrews before Sunday’s practice round.

“Definitely learned a lot [at the Scottish Open],” Scheffler said. “I had some trouble kind of going into the greens playing the bounce and judging stuff like that. I thought it was going to be firm when it was a little soft, and when I thought it was soft, it was a little firm. Got on the wrong side of things more often than not this week. Going into [The Open], if I clear up a few things with the putter, I’ll be ready to go.”

Last chance at a major

Xander Schauffele won the Scottish Open on Sunday, his second victory in as many PGA Tour starts, after he also won the Travelers Championship two weeks ago (he also picked up the 36-hole JP McManus Pro-Am in Ireland last week). He becomes the sixth player in the last decade to enter a major coming off wins in back-to-back starts. McIlroy was the only one among the previous five who won a major, at the 2014 PGA Championship.

Schauffele will try to win his first major in the last one of the season. At fifth the world, he is now the second-highest-ranked player in the world without a major championship victory. Only Patrick Cantlay (fourth) is ranked ahead of him among players without a major. Other notables who will be trying to win their first major: Cameron Smith (sixth), Viktor Hovland (ninth) and Burns (11th).

Will Zalatoris, who already has three runner-up finishes in nine starts in majors, also will try to get his first-as well as his first PGA Tour victory.

Will the wind blow?

Golf fans who were hoping for chilly weather and difficult conditions at The Open probably aren’t going to get their wish. Temperatures were unseasonably warm over the weekend, and Monday’s forecast called for highs in the mid-70s before cooling off slightly before Thursday’s opening round.

Winds of 15 to 20 mph are expected to remain steady from the west/southwest, so it doesn’t appear the swirling winds off the North Sea that have frustrated players for centuries are going to be much of a factor.

Of course, Scotland’s weather is rarely predictable. So that doesn’t mean conditions are going to be easy, even for the best players in the world.

If the wind doesn’t blow, scores could be very, very low because the Old Course doesn’t play as long as it once did.

“I think it could somehow be the opposite,” Thomas said. “”The fairways are already firm. If the greens end up getting baked and become firm like the fairways, with where they could place these pins you aren’t going to be able to get very close to them. It’s going to take a lot of discipline, patience and shot-making.”

Can Jordan Spieth get in contention again?

Spieth, the 2017 Open winner at Royal Birkdale, has never missed the cut in eight starts at The Open and has four top 10 finishes, including solo second in 2021. He calls The Open at St. Andrews “arguably the best golf tournament we play.”

“I just think the history of it, playing in the town, the idea that it could be the easiest or the hardest venue that we play depending on the day,” Spieth said. “Maybe it’s just I remember watching certain ones growing up, and so the holes, the kind of scenic holes starting and finishing really kind of hold on to.”

In Spieth’s last start at The Open at St. Andrews in 2015, he was attempting to win his third consecutive major, after winning the Masters and U.S. Open. He narrowly missed out on a playoff, which Zach Johnson won, and tied for fourth.

“It was a really special tournament for me back in 2015, trying to go for a third in a row and just kind of the crowd, you know, the putt I made on 16 and kind of the finish, it was really fun contending in that major and having a chance to win,” Spieth said.

The R&A announced in April that a record-breaking 290,000 fans are expected at St. Andrews this week. There were more than 1.3 million ticket requests, and the tickets issued will surpass the 239,000 who watched Woods win his first Claret Jug at the Old Course in 2000.

The R&A said a record 80,000 fans will attend the four practice days, exceeding the 61,000 who watched them at Royal Portrush in 2019. About 20% of the general admission tickets were awarded to fans under the age of 25, including more than 20,000 free tickets that went to children under age 16.

Because of an ongoing labor dispute, the R&A has advised fans not to travel to St. Andrews by rail.

The 25 most important players in 2022’s College Football Playoff race
Energy bosses to hold crisis talks with ministers over soaring bills
Nvidia warns on second-quarter revenue, shares dip
Monkeypox – how does it spread and what are the symptoms?
ISRO Completes LEM Test Ahead of Gaganyaan Project, Launches SPARK Virtual Space Museum: Details