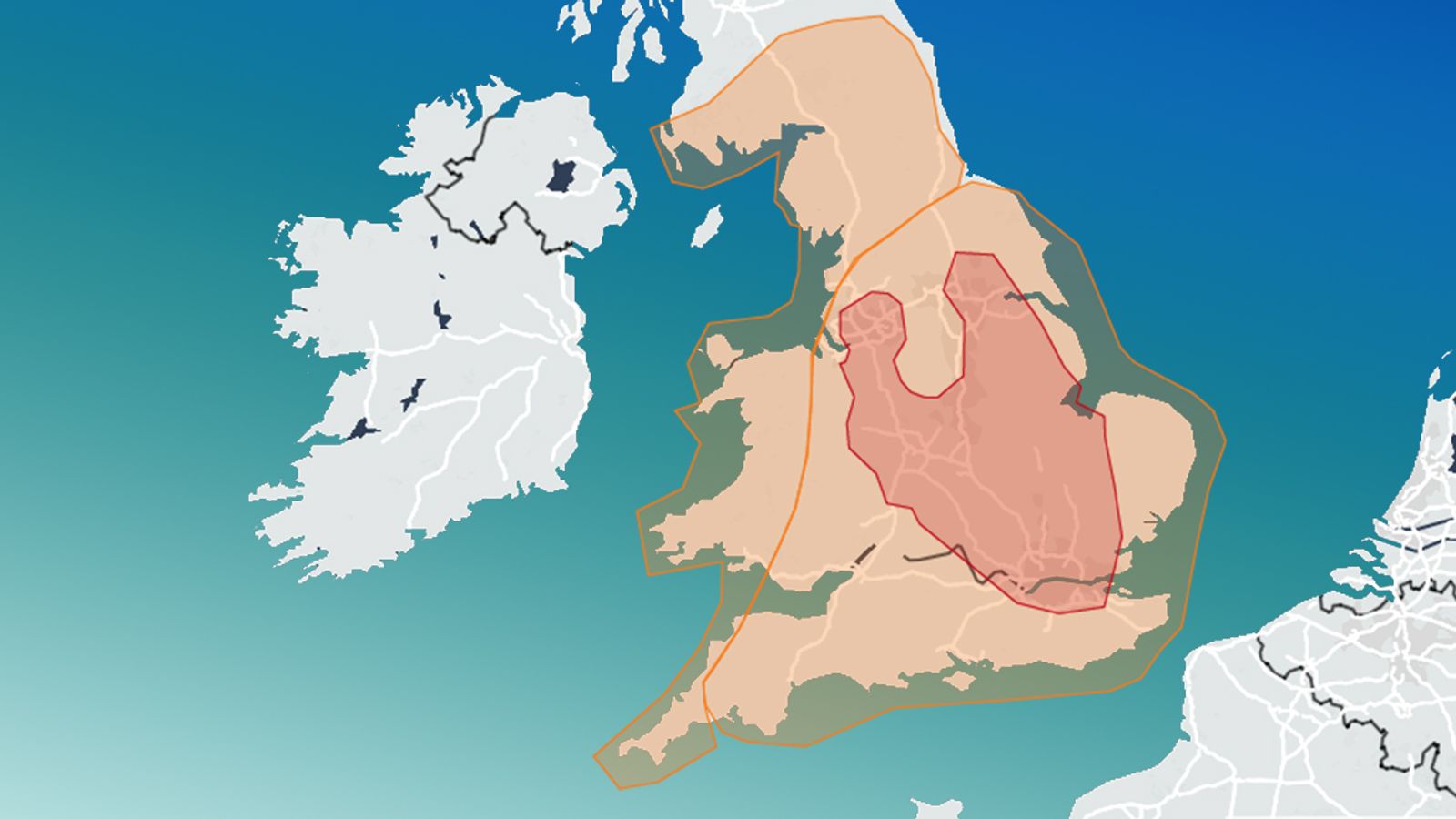 Forecasters now say there is an 80% chance of the mercury topping the UK’s highest ever record temperature of 38.7C (101.7F) set at Cambridge University Botanic Garden on 25 July, 2019.

There is a 50% chance of temperatures hitting 40C somewhere in the UK, the Met Office said.

This is likely to be along the A1 corridor north of London up to Lincolnshire, in areas including Peterborough, Grantham, Sandy and Stevenage.

The forecaster said the “exceptional hot spell” will bring “widespread impacts on people and infrastructure”.

“Population-wide adverse health effects” are expected, “not limited to those most vulnerable to extreme heat”.

Level four is reached when “a heatwave is so severe and/or prolonged that its effects extend outside the health and social care system”.

This means fit and healthy people could be susceptible to illness and death – not just high risk groups, UKHSA said.

“We’ve just issued a red warning for extreme heat for Monday and Tuesday which is the first such warning ever issued.

“The warning covers an area from London up to Manchester and then up to the Vale of York.”

Mr Madge said the mercury hitting 40C would be a “historic” moment.

“If we get to 40C, that’s a very iconic threshold and shows that climate change is with us now,” he said.

“This is made much more likely because of climate change.”

Elsewhere, the existing amber warning has been extended to the rest of England, Wales, and parts of Scotland from Monday.

The Met Office has said the red warning means “adverse health effects” may be experienced and will not be limited to “those most vulnerable to extreme heat”.

The weather could also lead to “serious illness or danger to life”, the forecaster added.

“Substantial changes in working practices and daily routines will be required”, the Met Office said.

The national weather service also warns there is a “high risk of failure of heat-sensitive systems and equipment, potentially leading to localised loss of power and essential services, such as water or mobile phone services”.

There will also be “significantly more people visiting coastal areas, lakes and rivers, leading to an increased risk of water safety incidents”.

The public has also been warned to expect delays on roads, along with delays and cancellations to rail and air travel.

Senior ministers assembled for a COBRA meeting earlier this week in anticipation of a national heatwave emergency being declared.

Cabinet Office minister Kit Malthouse warned the government is preparing for a surge in demand on the NHS and other services – as he urged the public to look out for people vulnerable in the heat.

UK heatwave: Revealed – the areas of England that are most vulnerable to hotter weather
Explainer: What is a national heatwave emergency and how will it impact the UK?

Public transport is also set to be affected by the searing temperatures, which can cause tracks temperatures to reach up to 50C and in some cases buckle under the heat.

Avanti West Coast warned passengers travelling between London Euston and Scotland journeys could be disrupted due to the impact of heat on rail lines.

Services could be cancelled at short notice and on Monday and Tuesday will be subject to revised timetables.

Meanwhile Network Rail also said slower speeds may need to be implemented and reminded people to carry water on journeys.