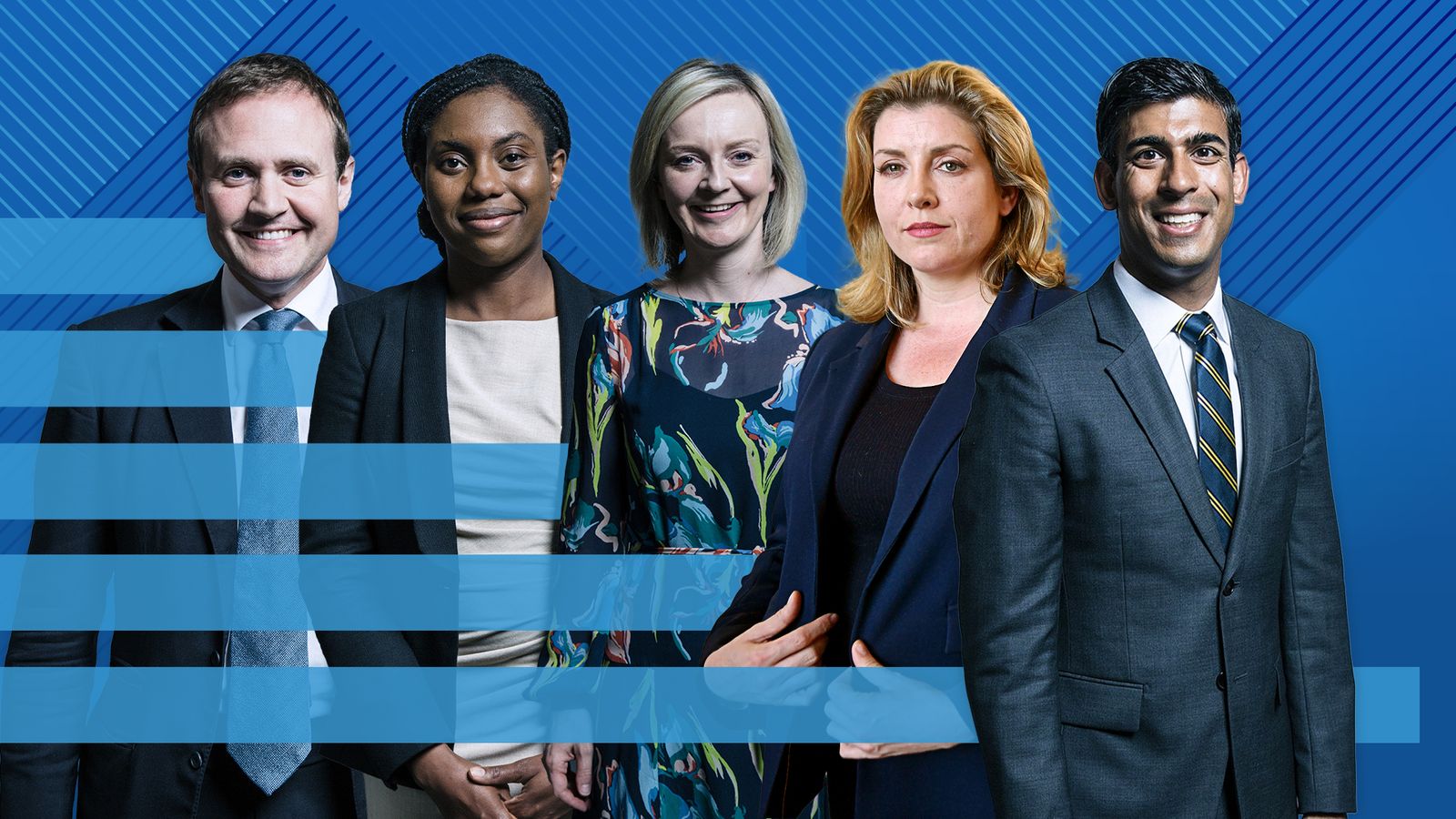 It’s the end of the first week into the Tory leadership race, and five hopefuls remain in the running to be the country’s next prime minister.

Rishi Sunak, Penny Mordaunt, Liz Truss, Kemi Badenoch and Tom Tugendhat are battling it out to take over from Boris Johnson after securing a large enough backing during the first two rounds of voting.

The candidates are now going head-to-head in a series of live TV debates, including one on Sky News on Tuesday, before the number of contenders is whittled down again.

The final two hopefuls will emerge by the end of next week and then face a summer of hustings, with Conservative Party members getting the chance to decide who will be the next PM on 5 September.

But who is expected to come out on top?

Result of second round

Rishi Sunak and Penny Mordaunt maintained their places at the top end of the leaderboard in first and second spot respectively following the second ballot.

Kemi Badenoch and Tom Tugendhat are also still in the running, coming in at fourth and fifth respectively.

Attorney General Suella Braverman was knocked out, and has since given her backing to Ms Truss.

Some Tory MPs have claimed she is not up to the job, but it is dark horse and relative unknown Penny Mordaunt who the bookies believe will come out on top.

Betting odds predict she has over a 50% chance of winning the election, compared to 30% for Ms Truss and 23% for Mr Sunak.

Despite being one of the favourites among right-wing Tory MPs, the odds on Kemi Badenoch becoming the next prime minister were just 7% as of Friday.

And although he believes he will win the race, bookies believe outsider Tom Tugendhat has just a 1% chance of succeeding Mr Johnson.

Read More:
Why to expect a surprise in the Tory leadership contest
Where do the contenders stand on tax, Brexit and cost of living?

Who do party members want?

While former chancellor Mr Sunak has the most support among Tory MPs, it is ultimately Conservative Party members who will choose their next leader, and therefore PM.

A YouGov snap poll of this group on Wednesday found that Ms Mordaunt is the new favourite to be leader, with the previous preferred choice Ben Wallace having declined to stand.

The trade minister appeared on Sky News today and claimed fellow candidates are trying to stop her from getting to the final round because she is who they most fear competing against head-to-head.

The YouGov poll of who members want as PM showed Ms Mordaunt convincingly topped the list, at 27%.

Ms Badenoch came in at a distant second with 15%, followed by Rishi Sunak and Liz Truss on 13% each and Tom Tugendhat on 8%.

Elite Ukrainian forces behind attack on weapons store in Crimea
The front-runners in Kenya’s presidential election
Man charged with murder after 87-year-old stabbed to death on mobility scooter
EU to cut off some Russian banks from SWIFT
Tiger 21, an exclusive club of investors, says the ultra rich are doubling down on stocks