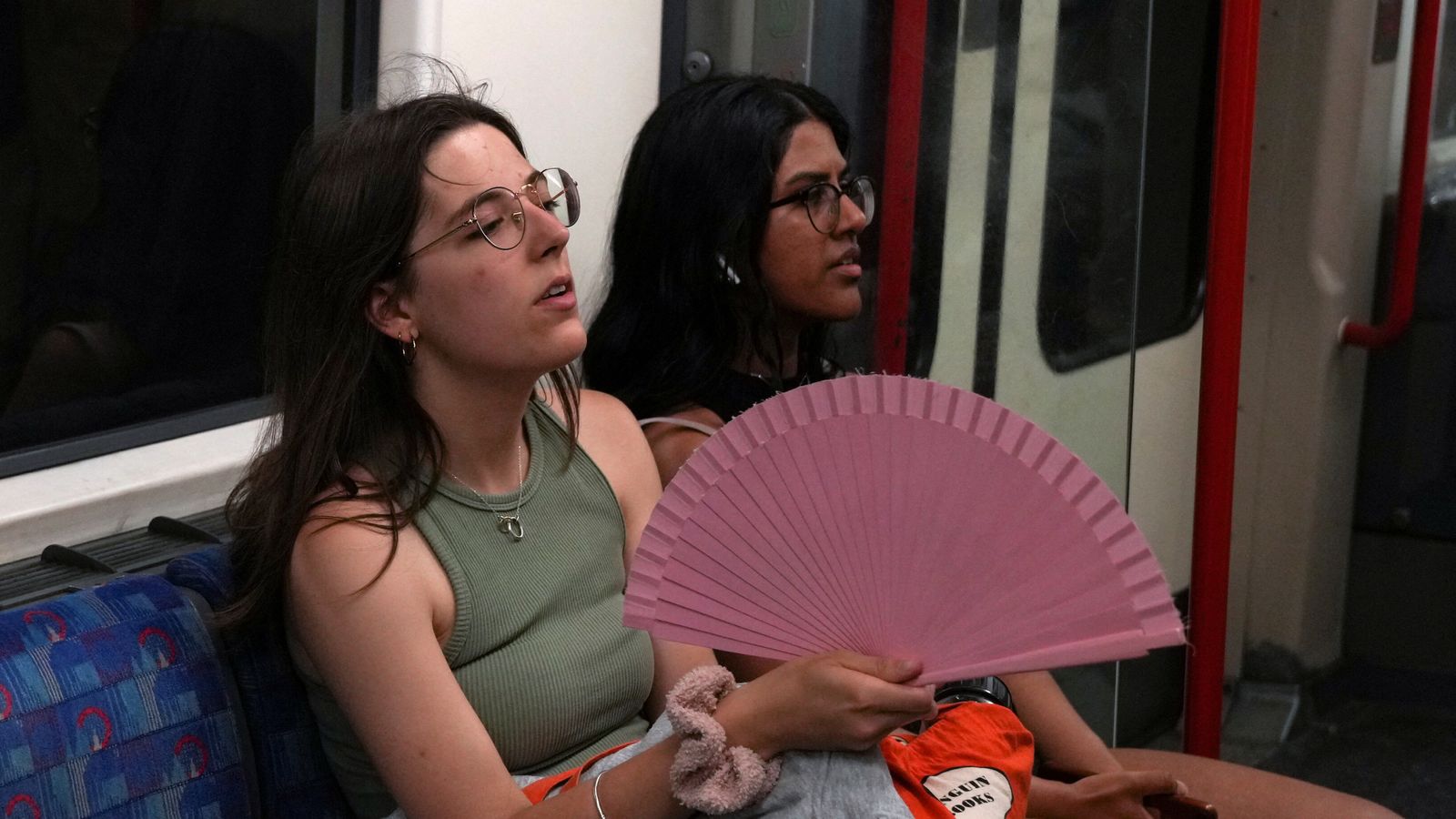 Britons are bracing themselves for extreme disruption, as forecasters predict possible temperatures of more than 40C (104F) in parts of the country this week.

Amid warnings that lives are at risk, a national emergency has been declared by the UK Health Security Agency and the Met Office has issued its first-ever red warning for extreme heat.

The heatwave is set to peak on Tuesday, with Monday set to see maximums of around 39C (102.2F) in parts of the West Midlands during late afternoon, according to the Met Office.

Find out the five-day forecast where you live

People are being urged to avoid all non-essential travel and warned of major disruption to journeys by train and car.

A No 10 spokesman said railway speed restrictions may be needed “on some parts of the network… to manage the hot weather and to avoid any potential damage.

Network Rail warned that journeys will take significantly longer and delays are likely.

Train operators, including Transport for London (TfL), are strongly encouraging customers not to travel on Monday and Tuesday.

TFL chief operating officer Andy Lord said: “Due to the exceptionally hot weather that is expected… customers should only use London’s transport network for essential journeys.

“If customers do need to travel, they should check before they travel as we are expecting there to be some impact to Tube and rail services.”

London North Eastern Railway has urged people not to travel on Tuesday, tweeting that “no trains will run” between London King’s Cross and “south of York and Leeds”.

Network Rail operations director Sam MacDougall said: “Closing the line to traffic is always a last resort but it is the right thing to do to keep people safe on Tuesday given the unprecedented heatwave forecast.

“The forecast temperatures are well above those which our infrastructure is designed for, and safety must come first.”

Avanti West Coast is urging people not to travel unless it is absolutely necessary.

Meanwhile, motorists have been advised to try to make their journeys outside the hottest periods of the day, particularly if they have older cars.

The RAC has warned more drivers will need help as cars overheat, and asked their customers to question whether they really need to make the journey in the first place.

Some hospitals have taken the decision to cancel routine appointments and surgeries due to the risk to both patients and staff due to the predicted extreme heat.

Joe Harrison, CEO of Milton Keynes University Hospital, said on Twitter: “We have taken the decision to stand down routine outpatient appointments and surgery on Monday and Tuesday because many of the patients travelling to these appointments are frail and at increased risk, and due to the unpredictable nature of very high temperatures on demand for emergency care and on care environment.”

With ambulance wait times already on the rise, there have been warnings that things will only worsen during the heatwave, with patients potentially stuck in hot vehicles for hours while waiting for hospital admission.

East Midlands Ambulance Service Director of Operations David Williams warned patients they may face “an extended wait” for an ambulance and urged people to call 999 only as “a last resort”.

Contingency support, such as more call handlers and extra working hours, have been put in place for ambulance services while the chairman of the NHS Confederation said hospitals are going to be “really, really pushed” over the next few days.

Emergency services have urged people to be careful when trying to stay cool after the body of a boy was recovered in Salford Quays, Greater Manchester, in the early hours of Sunday morning.

Some schools in several counties, including Nottinghamshire and Hampshire, have confirmed they will close, and the NEU teaching union has said it will support headteachers taking that decision.

In Norfolk, North Wootton Academy near King’s Lynn has closed due to a low water supply.

Many others are taking contingency measures, with PE lessons cancelled and pupils being allowed to leave early.

Many school sports days scheduled to take place during the hot weather are also being postponed or cancelled.

Some schools have said they will arrange staffing to keep sites open for parents unable to find alternative childcare at short notice.

Stay out of the sun.

Think about adjusting your plans for the warning period.

If you do have to go out, wear a hat and sunscreen, keep in the shade as much as possible and carry water.

Don’t leave people or animals in hot cars and keep a particular lookout for your family and neighbours, especially vulnerable people.

“I am sure that headteachers will be doing everything they possibly can to make sure their schools are kept as cool as possible, that children are kept out of the hot sun and are kept indoors as much as possible,” she told Sky News.

“I think children have missed out quite a lot already in terms of their education, and it’s right for them to be there.”

Some southern nurseries will be restricting their hours on the hottest days following Public Health England’s guidelines for supporting children in Early Years.

The majority of UK schools are set to break up for the summer holidays later in the week.

Some shops and salons around the country have also advised they will be closing or shutting early on Monday and Tuesday.

Unprecedented weather conditions have led to many weekend events – including dog shows and summer fetes – being called off, as well as larger scale events at the start of the week.

The British Horseracing Authority (BHA) has called off five meetings – scheduled fixtures at Beverley and Windsor on Monday and all-weather cards at Chelmsford and Wolverhampton on Tuesday, along with Southwell’s jumps fixture.

The Met Office’s chief meteorologist, Paul Davies, said the “unprecedented heat” is something the UK is going to have to get used to as it could be a “regular occurrence by the end of the century”.

He told Sky News: “I’ve never seen the charts that I’ve seen today. The speed at which we are seeing these exceptionally high temperatures is broadly in line with what we are saying, but… to see the brutality of the heat that we are expecting tomorrow is quite astounding. It does worry me a lot.”

Europe’s drought ‘on course to be worst for 500 years’ amid fears ‘situation could worsen’
Fuel prices slowly falling in the UK as recession fears outweigh ‘war premium’
The Length of Earth’s Days Has Been Mysteriously Increasing, and Scientists Don’t Know Why
Boris Johnson will not intervene in cost of living crisis as that is ‘for future prime minister’
Slower inflation growth eases pressure on US Fed to hike interest rates