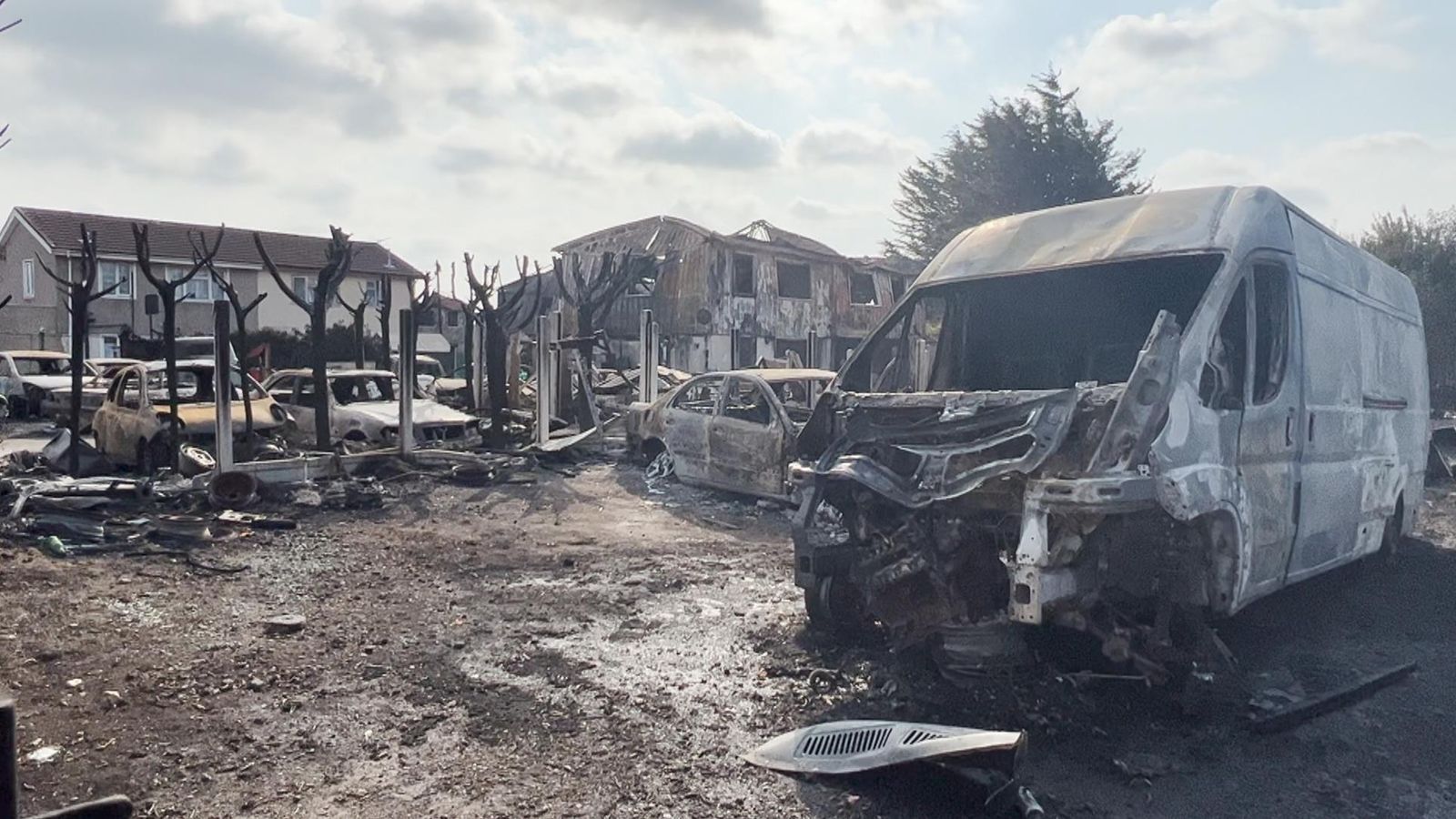 Footage has emerged of destroyed homes and cars in east London after the capital experienced its worst day for fires since the Second World War.

Video from Dagenham shows the charred remains of a large part of a street after a grassland fire sparked a series of blazes.

Tuesday was the hottest day in UK history, sparking severe fires across the country, with the public being warned the “danger isn’t over” and today’s heat still “poses risks of new fires sparking off”.

In the village of Wennington, east London, around 18 or 19 homes were destroyed by fires.

Local councillor Ray Morgon told Sky News: “We’ve got our housing team who are helping people with their immediate housing needs, but obviously we need to have a conversation with people about their longer term housing needs.” 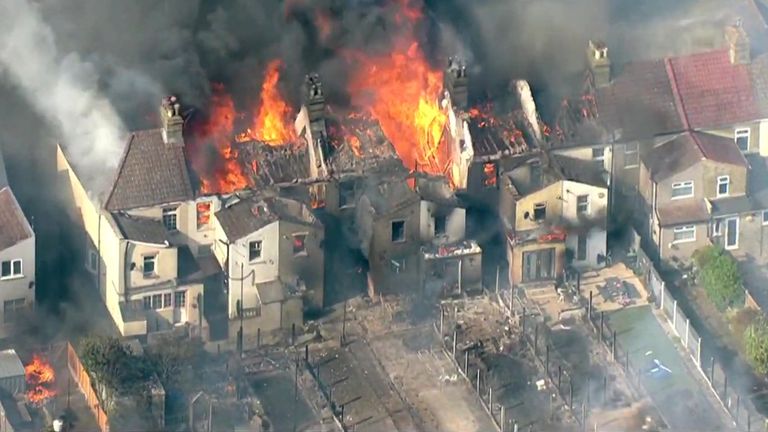 Fire crews remain at the site of a huge blaze which has destroyed properties and grassland in the village.

Sky News reporter Sadiya Chowdhury has says she has been told the “danger isn’t over” and the heat still “poses risks of new fires sparking off”.

She added the blaze on Tuesday covered 20 hectares of grassland. 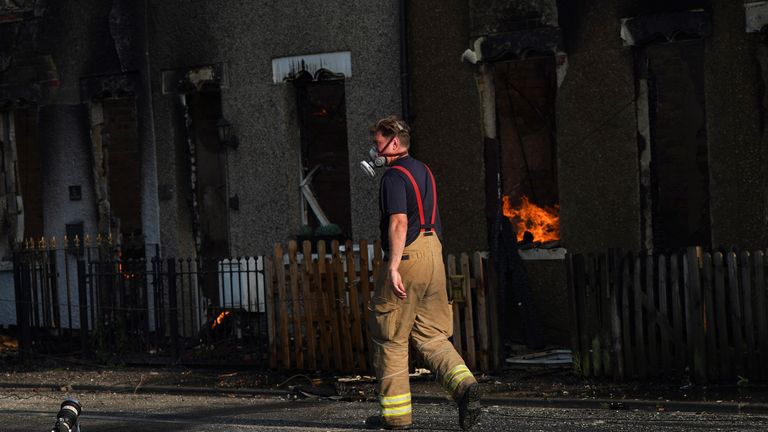 Asked what conditions were like, a firefighter at the scene replied: “Absolute hell.”

Flames ripped through homes elsewhere across Britain as the country was scorched by extreme heat.

Scenes of destroyed properties and failing transport infrastructure gave the country a glimpse into what could become the new reality in summer months because of climate change.

A new record for the hottest day ever seen, of 40.3C, was recorded in Coningsby, in Lincolnshire, on Tuesday afternoon – beating the previous record of 38.7C in Cambridge three years ago, by 1.6C.

Major incidents were announced by fire brigades in London, Leicestershire and South Yorkshire as dozens of fires broke in the sweltering heat – with flames ripping through houses, schools and churches.

A ring of fires in and around London lead to people being evacuated and many taken to hospital.

London mayor Sadiq Khan said Tuesday was the “busiest day for the fire service in London since the Second World War”.

He told Sky News: “On a normal day, the fire service receives, roughly speaking, 350 calls on a busy day. Yesterday they received more than 2,600 calls.”

Mr Khan also said 41 properties were destroyed in London and 16 firefighters were injured to some extent.

He added that at least some of them were taken to hospital because of “heat stress”. 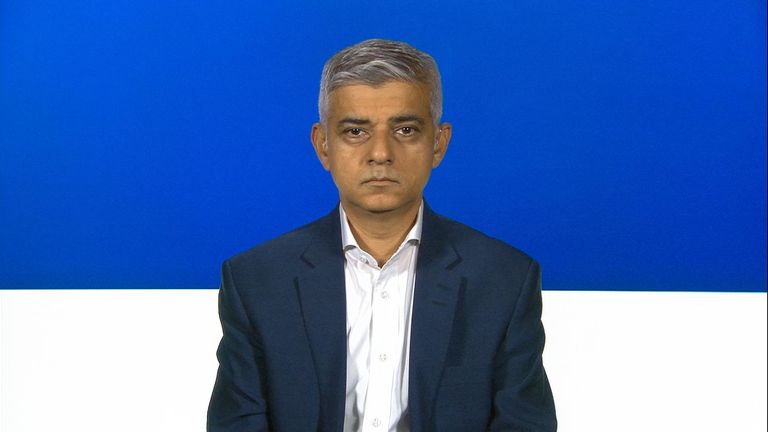 Khan: Worst day for fires in London since WWII

The London mayor continued: “It is really important for us to recognise that one of the consequences of climate change are these sorts of temperatures which lead to the sort of fires you’re seeing behind you.”

Mr Khan also urged people not to have barbecues on Wednesday, despite temperatures dropping by 10C in some areas, because the grass is still dry and will allow fire to spread rapidly if it catches alight.

Heavy showers and thunderstorms are expected to lash parts of the country, potentially causing localised flooding.

However the threat of wildfires remains as other parts of the UK will still see highs of up to 30C and with little rain for months in some areas.

Firefighters were inundated with calls all around the country on Tuesday, with one fire chief calling the “brutal” day a “game-changer” and a preview of the effects of climate change.

The Met Office said 34 observation sites across England provisionally broke the previous all-time record, ranging from Bramham, in West Yorkshire, to Charlwood, in Surrey, while a further five had equalled it on Tuesday.

Scotland experienced its hottest day on record, with the temperature reaching 34.8C in Charterhall in the Scottish Borders, Met Office provisional figures showed.

Elsewhere, a serious blaze occurred in Barnsley when a row of houses in the Moorland Avenue area was consumed by flames, with crews continuing to battle fires elsewhere in the area.

Doncaster Council said a major blaze in Clayton also spread to three residential properties and there were reports of houses on fire in the Kiverton Park and Maltby areas of Rotherham.

“We will not be attending Automatic Fire alarms. Please only call us if it’s an emergency.”

Nine people have died since Saturday in swimming accidents and there has been widespread disruption to train services.

Dave Walton, deputy chief fire officer for West Yorkshire Fire and Rescue Service, said Tuesday was a “peek into the future” amid huge demand for firefighters.

He said: “It’s about a completely and fundamentally different operating environment where fires burn with such ferocity, and spread with such speed in suburban areas that you can’t stop them.

“We’ve seen the kind of conditions faced by international colleagues just miles from our capital city, and in towns, villages and cities the length and breadth of the country.

“Today was about climate change, the hottest UK day on record – ever!” 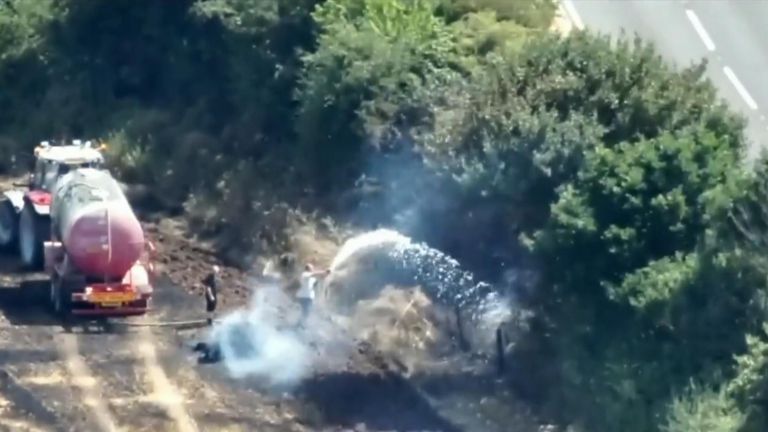 Chief Secretary to the Treasury Simon Clarke said the government will “stand by” those impacted by the fires.

“I’m absolutely certain the government will look at whatever is needed to make sure that people are looked after at a time like this,” he told Sky News.

“The government will stand by people who need assistance after an emergency event, as we always do.”

I think this is an indication of things to come.

I think we need to be prepared for experiencing a lot more of these wildfires as the climate changes, as it gets hotter and drier in the UK, we’re likely to see more of these types of incidents.

And we need to be prepared for them, not just in terms of the way the fire service responds, but also how we design our urban environment, especially what’s known as the WUI – the wildland urban interface – as we’re seeing in Wennington – an urban environment on the edge of wildland.

And we can learn from other countries around the world that have had to face this sort of problem for many, many years.

And so, for example, you build fire breaks around your properties. You pick the type of plantings that you have in close proximity to your property so that they are less likely to easily combust.

We need to be prepared…This threat is not going to go away.

Dozens of trains were cancelled or delayed across England on Wednesday morning because of problems caused by the extreme heat – which caused damage to overheard wires, tracks, and signalling systems.

National Rail has told customers to check before setting off on their journeys and to only travel if absolutely necessary.

Meanwhile, LNER is advising customers not to travel after the heat caused major damage to the rail infrastructure on its network.

Train services across the Great Northern and Thameslink network will also be cancelled, delayed or revised due to a “number of incidents”.

You can see the full breakdown of today’s disruption by visiting the National Rail enquiries website.