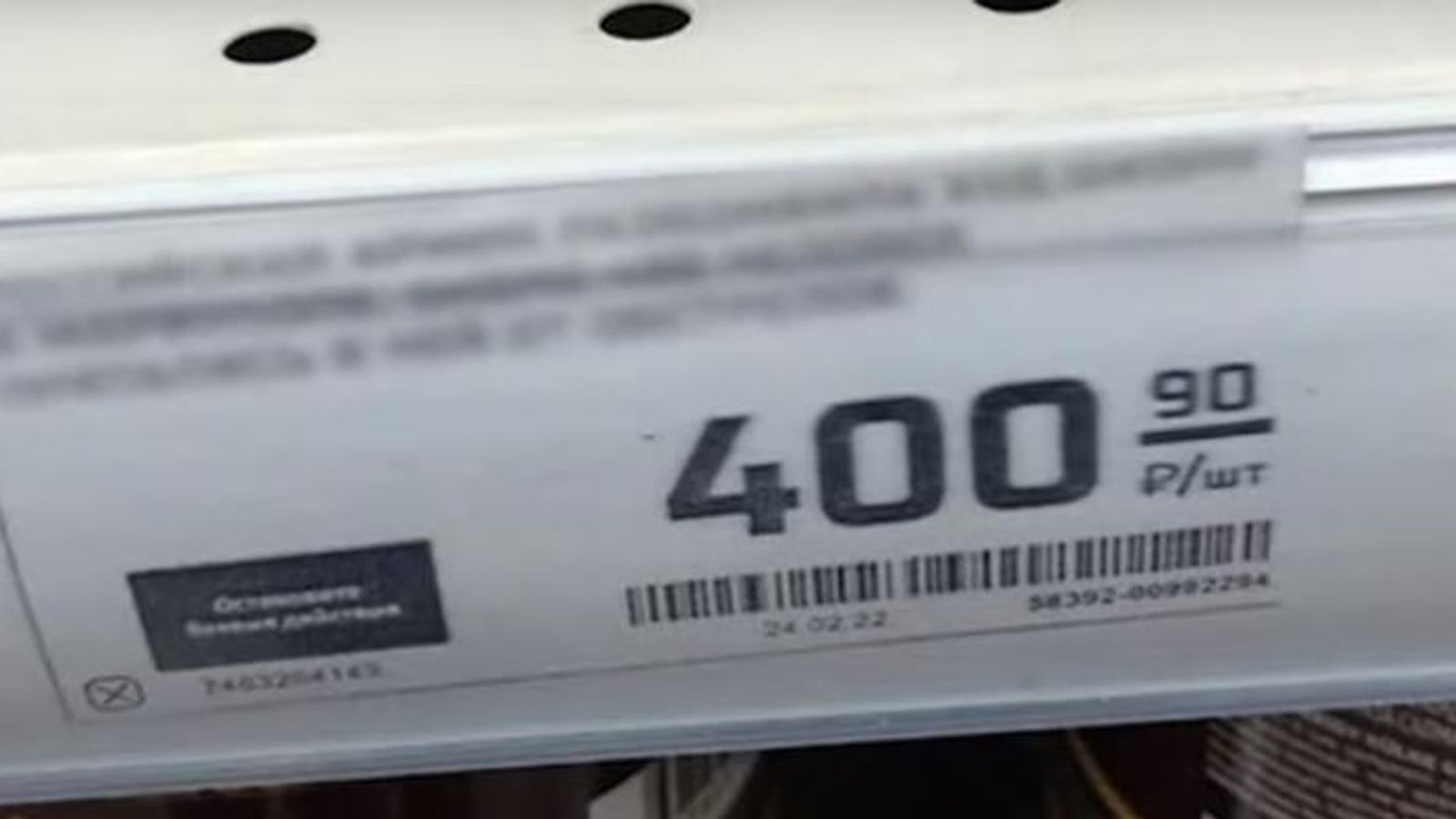 It’s been four months since Sasha Skochilenko, a 32-year-old artist from St Petersburg, printed off some supermarket price tags with scathing descriptions of her army’s actions in Ukraine and placed them on the shelves of a local supermarket.

“Sasha had friends in Kyiv. She taught children in Ukrainian summer camp how to shoot movies and act. She was really afraid for them.”

It was just after the Mariupol theatre bombing. A customer in the supermarket reported her to the police.

She’s been in pre-trial detention ever since, accused of spreading fake news about the Russian armed forces. If the state shows no leniency, and Russian justice is rarely merciful, she could face up to 10 years in jail.

Beamed via a grainy TV screen into the courtroom from her prison cell, Skochilenko’s voice crackles with emotion as she sees Sonya and a handful of other friends. They’ve managed a brief audience with her before the start of yet another pre-trial hearing and they’re keen to tell her they love her.

Skochilenko’s long dark hair and the bars of her cell highlight how drawn she looks, the one flash of colour comes from a huge red heart on her T-shirt.

On the other side of the courtroom: burly men in uniforms. An image to remember of the state versus Russia’s shrinking protest movement. David versus Goliath, with Goliath very much on top.

Earlier this month, Moscow city councillor Alexei Gorinov was sent down for seven years – the first to be sentenced under draconian new ‘fake news’ legislation.

Others like Skochilenko or prominent political figures like Ilya Yashin or Vladimir Kara-Murza are in detention awaiting trial, the initial attention over their arrests diluted by an endless drip-feed of court dates, legal process and additional charges.

Walk the streets of St Petersburg and you’d hardly get a sense things were amiss. Summer is in full swing. Restaurant verandahs are awash with geraniums and girls in bright dresses. Pleasure boats chug along the famous Nevsky river, churning up a wake.

It is the same story in Moscow, too, and probably elsewhere across Russia. High-summer, five months in.

Every now and then, though, there’s a reminder. A piece of graffiti sprawled in red on a billboard saying: ‘Have a good day – and keep pretending that nothing is going on around you!’

A fountain running red in Moscow in memory of a teenage boy killed in Kharkiv. A micro-protest, enough to jolt perhaps a few passers-by out of their reverie, if that’s what they’re in.

That’s the idea behind ‘malinkey piket’ or ‘little picket’ – the brainchild of another St Petersburg artist.

It’s an Instagram page where people send in photographs of their mini-pickets, mostly plasticine figures they’ve positioned in public spaces. “Send us your little brave ones, tag us and we will publish them all,” say the instructions.

“The first weeks when the war began most of my friends and the people I know had no words,” its creator says.

“The next step was about whether you leave Russia or no. Today I think the conflict is about normalisation. It’s about, ‘am I seeing the war or am I not?'”

He doesn’t like what’s going on but he believes the situation in Ukraine – and other global conflicts – is more to do with neoliberalism gone awry than it is because his president sent in troops. He says he’s more interested in the notion of protest than what it is that people are protesting about.

He’s not sure the state is to blame for people’s inability to protest in Russia. A conversation with him dances around points which seem glaringly obvious, taking detours into the perils of algorithms and the dilemmas of our atomised societies. It feels like an exercise in avoiding hard truths.

The figures on his Instagram page, though, have a more direct message. “Make war on poverty, not Ukraine,” says one. “Ukraine is not our enemy,” says another.

One brave little figure with round, startled eyes we manage to track down to the St Petersburg canal where he’s been placed. He’s hard to find if you’re not looking but he carries a powerful message. “In five years’ time everyone in Russia will be ashamed they believed a madman and his propaganda,” his banner says.