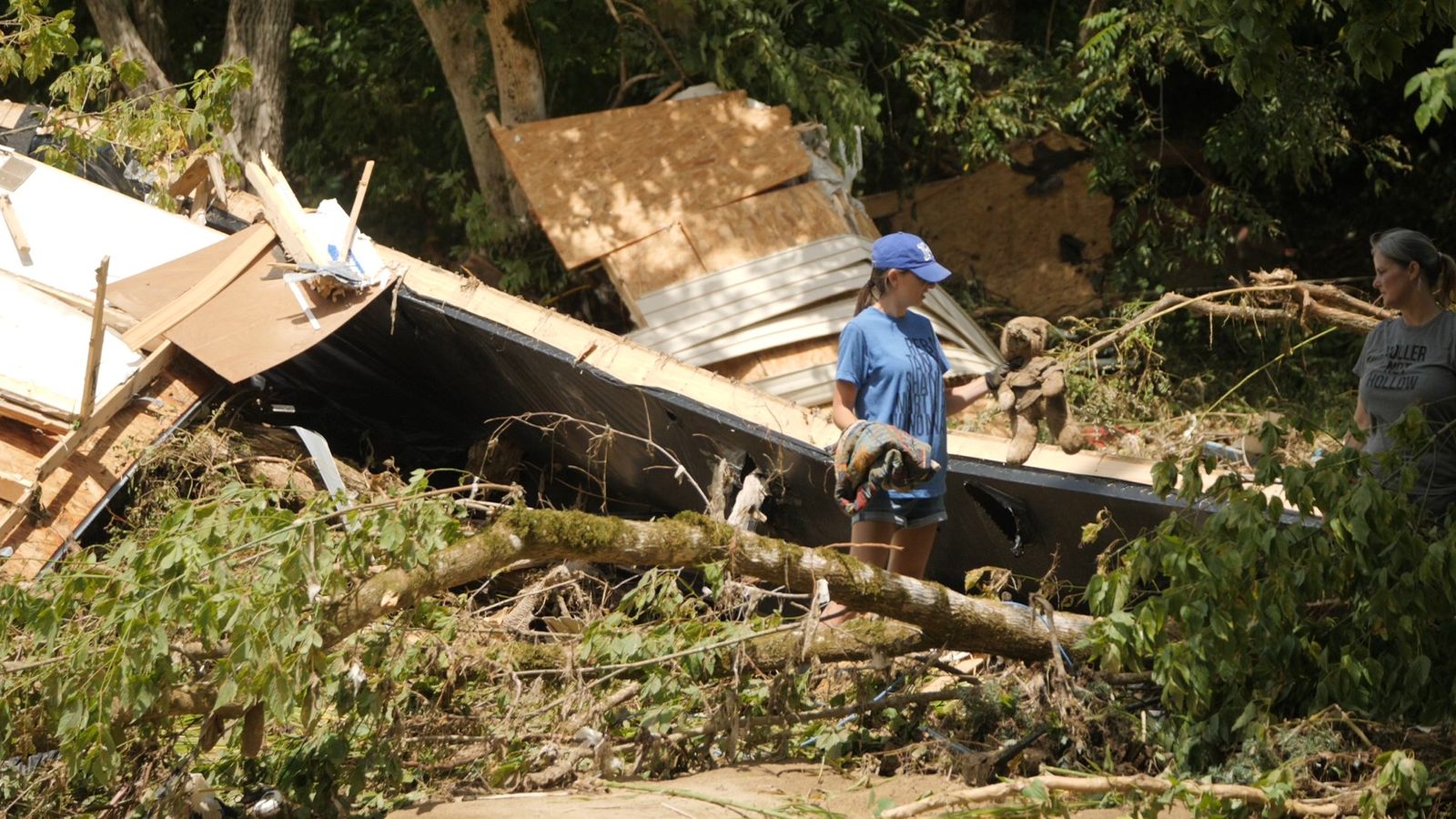 It’s the amount of water that passed through these rural Kentucky creeks that is so astonishing.

I’m standing by the banks of the river which runs through the town of Hazard.

I’m at least 30ft above the current water level. Yet there is mud and debris all around. The water level two nights ago was 10m (30ft) higher than it is now.

And that extraordinary extra volume of water was cascading through communities all over this part of Kentucky.

No wonder the power of the torrent was so huge.

A little down the valley, Eunice Howard showed us what was left of her home.

The house she built 27 years ago with her late husband has been ripped apart.

“I heard a noise and I raised the window and I saw the water and I knew I had to get help.”

She doesn’t really know how she managed to escape and had she not, she would certainly have lost her life.

Eunice’s granddaughter, Cortney Clemons, wanted to show us the power of the water.

As we walked up the river bank from where the half intact house now sits, I realised what she had been trying to explain, because the house wasn’t built where where it now sits.

A few hundred metres away, she showed us a patch of ground with some cement gridding. It was the foundations of her grandmother’s home.

The building had literally been picked up and carried downstream.

We put our drone up and it became clear: a path of destruction. It was one snapshot of so many communities destroyed.

I asked Eunice and Cortney if they had ever seen this sort of flooding before.

“Not at all… not in all our time here,” said Eunice who has been in this valley for more than 50 years.

Cortney added: “It’s just very very sad to see the house you grew up in and everything get washed away. Memories… all that stuff you can’t get back.”

She said they would go ‘creek fishing’ to find things belonging to her late ‘pop’.

Two things strike me on every extreme weather story I report on – and there have been many recently.

The first is that it’s always the poorest hit hardest. So often the weather does discriminate.

In New York last year, the dead were those living in the basement apartments.

And that’s the second thing – governments need to wholly rethink building and planning regulations with much more urgency.

Homes are not built to withstand the extreme weather that is now increasingly the norm.

There is lots of talk about funding for climate adaptation, but it’s too late for every community hit, now seemingly with such regulatory.

Fighting climate change is about much more than cutting our emissions.

‘Assault on a political opponent’: Donald Trump claims FBI ‘stole’ his passports during raid
Industry veterans take a shot at making fusion commercial with insanely powerful lasers
Cloud stocks are rallying after a punishing start to the year as 2022 outlook brightens
Harvick wins again; playoff picture still in flux
Kia’s new 576 HP EV6 GT will beat a Ferrari and a Lamborghini in a race