Michael Gove has backed Rishi Sunak to be the next Conservative leader and prime minister, as he accused Liz Truss of taking a “holiday from reality”.

The former cabinet minister, who was sacked by Boris Johnson after telling the PM he should quit last month, said slashing taxes was not the answer to the cost of living crisis.

Politics Hub: Sunak and Truss disagree over how to handle Putin

In a clear swipe at Ms Truss’s proposals, he wrote in The Times: “I am deeply concerned that the framing of the leadership debate by many has been a holiday from reality.

“The answer to the cost-of-living crisis cannot be simply to reject further ‘handouts’ and cut tax.”

Mr Gove also indicated that he would not be returning to frontline politics, whoever becomes the next PM.

“I do not expect to be in government again. But it was the privilege of my life to spend 11 years in the cabinet under three prime ministers,” he wrote.

“I know what the job requires. And Rishi has it.”

He added: “Proposed cuts to national insurance would favour the wealthy, and changes to corporation tax apply to big businesses, not small entrepreneurs.

“I cannot see how safeguarding the stock options of FTSE 100 executives should ever take precedence over supporting the poorest in our society, but at a time of want it cannot be the right priority.” 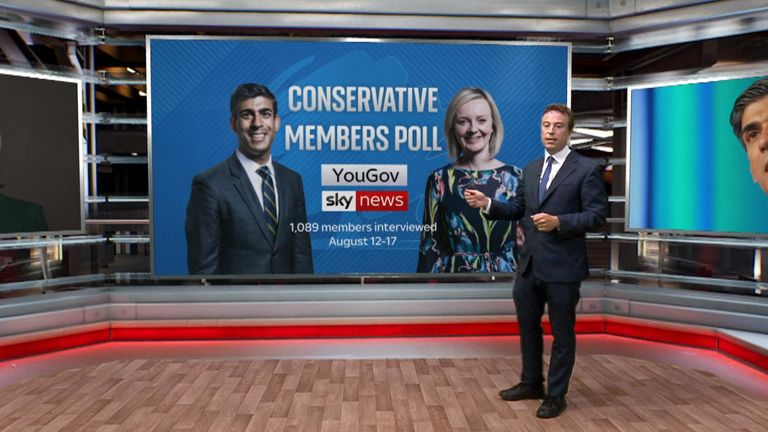 What’s the state of the Tory leadership race?

Mr Gove, who initially backed Kemi Badenoch in the early stages of the leadership contest, also said he did not believe Ms Truss’s “prospectus is the right answer for the world we face”.

“It does not address the fundamental problems of potential neglected, productivity suppressed and the vulnerable suffering the most,” he said.

The former levelling up secretary also criticised his Conservative colleagues who have backed Ms Truss for following the “SW1 consensus”, saying: “A bandwagon is clattering down Whitehall with eager new adherents clambering aboard.”

There was also criticism of Ms Truss’s plan to lift the ban on grammar schools. Mr Gove said there is “neither the money to build them nor the evidence they advance social mobility”.

The Sunak campaign welcomed his backing, with a spokeswoman saying: “Delighted to have the support of a party and cabinet veteran who has intellectual heft and shown the radical reforming zeal in every job he has had, that we now so desperately need.”