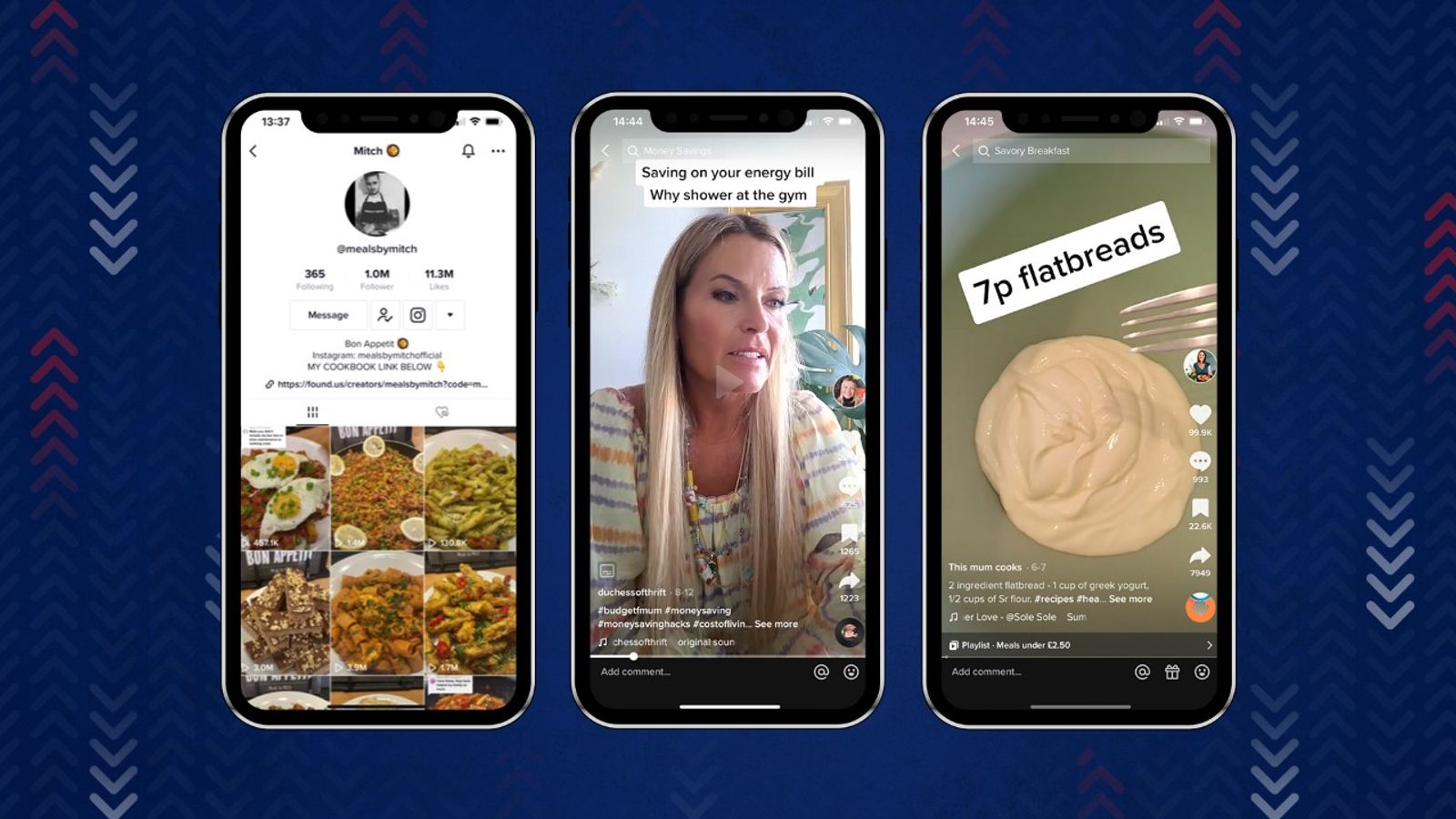 As the cost of living crisis puts a strain on families, people are increasingly turning to an unlikely place for help: TikTok.

Budget recipes, energy saving hacks (such as showering at the gym), saving money on a food shop, and cutting back on food waste are some of the videos going viral on the platform.

TikTok says #budgetmeals and #cheapeats were both highly shared hashtags in July, suggesting users were focused on affordable food options – and the #costofliving hashtag has around 413.2 million views.

Mitch Lane cooks meals for £5 or less on his @mealsbymitch account, even showing people the receipt and making sure recipes are accessible to all and don’t just rely on store cupboard ingredients that not everyone has.

The 29-year-old has one million followers and thinks rising costs have contributed to the popularity of his videos.

“The cost of living is crazy. Everybody is trying to offer as much help as they can,” says Mitch.

The father-of-three from Wolverhampton, started his account during the first coronavirus lockdown and says as he has built a following he decided to use his account for “a bit of good”.

“Some people are working full-time jobs and can’t even afford basic necessities. Choosing whether to stick £10 worth of petrol in the car, or to buy a tenner’s worth of electric. It’s unacceptable to be living like that. So I just thought, I’m going to try and do what I can. I’ve personally lived like it myself. I’ve lived on a budget.”

Mitch has received millions of views for his content, which he says “blows his mind”, and has also had people thanking him in the comments.

“There are a lot of people saying [in the comments] ‘you’re doing more for this country than our current government’. People are saying a lot of that. I’d say 95% of it is fantastic feedback. Honestly, it’s so nice to see what people say. Everybody has welcomed me so much. People are really thankful and everyone is really getting behind it. Obviously there’s the odd 5% who say, ‘you haven’t included the cost of your electric, you didn’t include the cost of your petrol to get to the supermarket’.”

Another TikToker who is using her account to help people is Jo Rourke, who’s behind @thismumcooks and grew her account around 12 months ago.

Her first videos that got over 100,000 views included one that was titled ‘Shop Hack’ about looking out for offers in supermarkets, and another showing an easy and budget friendly breakfast for children.

“I suddenly realised that there were a lot of people who didn’t quite know what to do in regards to buying in bulk to save money, and I thought I’d start sharing these things, because it’s what I have do. It’s how I shop, it’s how I’ve always shopped. So I just started sharing ideas and it’s grown from there. But it just started off as my daughter wanting to join [TikTok], and I just thought I’d do it with her.”

Jo now has tens of thousands of followers, who watch her videos on how to do food shops on a budget, meal planning and avoiding food waste.

The 40-year-old from Manchester shows people how to use leftover food items from bread to popcorn, to making butter from scratch.

One of her top viewed videos includes making 7p flatbreads, with 2.1 million views.

But why are videos like this taking off on TikTok?

“The cost of food across the board has gone up so much and I think people are seeing that, and then thinking how can I reverse that, how can I get my shopping back to where it was or cheaper,” says Jo.

“I’m a working single parent with three children so I understand how tough it can be because there’s a lot of pressure on kids to have certain things… It’s about finding a balance, particularly now. I think everyone is going to struggle. So people that historically have been able to afford to eat whatever they want to eat, are going to find that they have to start making different choices.”

Like Mitch, Jo says she’s had people thank her in the comments for her advice and tips on saving money. She’s also had people ask for help.

“Someone came to me earlier on in the year and said ‘I’ve just got £15 to feed myself and my daughter for the rest of the week, how would you make that stretch?’

“I made a weekly food plan and I put the shopping list together for them and whilst it wasn’t the most exciting, it would feed them and their child for that period of time to get them through to the following week.”

With the rising cost of living, #moneysavingtips is also a popular hashtag, with a total of 543.2 million views.

Heidi Ondrak, who lives in Plymouth, is the @duchessofthrift on TikTok.

The 51-year-old says she started out by posting content about sustainability and buying second-hand fashion on Instagram. But with the news of the cost of living crisis she decided to create a TikTok account in July, and says a “happy byproduct” of all her sustainability content “is saving money”.

From how to save money when cooking, to suggesting people shower at the gym to save on energy, to what she describes as a “cheeky” tip on making the most of a coffee subscription, which has nearly half a million views, Heidi says she thinks content like this is popular because it’s accessible to everyone.

The mother-of-two says TikTok has become a community of people wanting to share tips on how to cut back on costs.

“There are tips and hints in the conversation [beneath the videos], so it’s like pooling together resources. People comment and add in what they are doing as well [to save money]. If you think about it this is reaching across the country. If we can pool all our resources and ideas together, you have loads and loads of stuff and a resource to pull from, and think, ‘what else can I do?’.”

The cost of living crisis is hitting many families, including those on good incomes, with the chancellor warning that people on £45,000 salaries will need help paying their energy bills.

Energy bills will soar for millions of families in the autumn after the price cap was increased to £3,549 a year – a record rise of 80%.

It comes at a time when households are already wrestling with soaring food and fuel prices.

Google unveils new flagship Pixel phones and its first smartwatch, which has Fitbit built in
Trump suing CNN as he claims defamation – and seeks $475m in damages
Nations demand urgent meeting with Kwarteng as Tory top team doubles down on plan to cut spending
Whom should MMA fans follow from Season 6 of Dana White’s Contender Series?
Worcester players to have contracts terminated