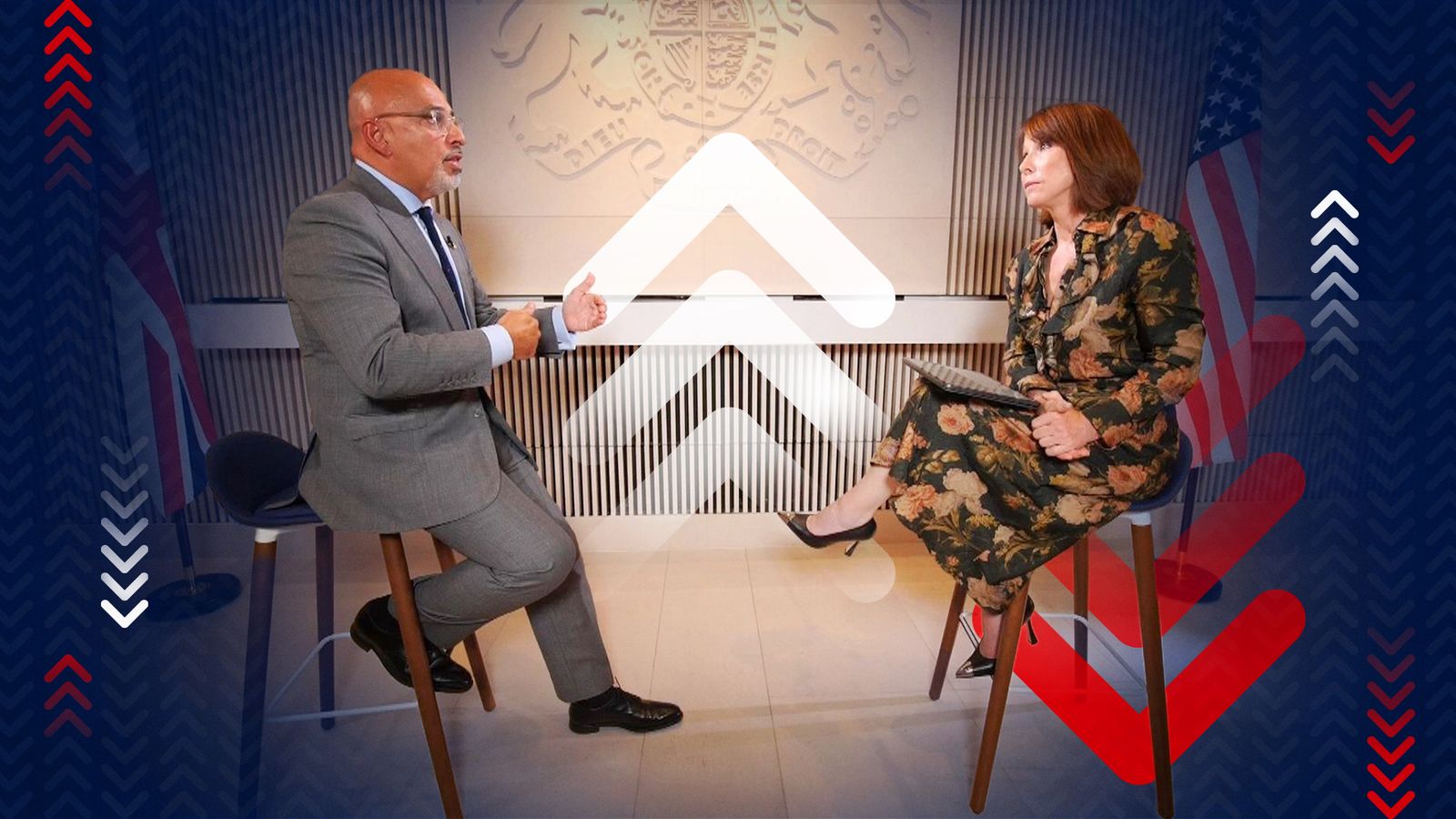 Chancellor Nadhim Zahawi has told Sky News that nobody should be cut off this winter because they can’t pay their energy bills.

In an exclusive interview with Kay Burley, he accused Russia of using energy to divide Western countries, but he insisted the UK must continue to support Ukraine.

Mr Zahawi promised there would be additional help for struggling families. However, he stuck to the Downing Street line that it will be up to the new prime minister – due to be named on Monday – to decide what shape it takes.

The chancellor’s comments come as the Resolution Foundation warns British households are on course for the deepest living standards squeeze in a century, with real household disposable incomes expected to fall by 10% this year and next.

Politics Hub: Truss and Sunak split over how to tackle energy crisis

Mr Zahawi was speaking to Kay Burley on a visit to Washington, where the government is working on plans with the US to stop Russian President Vladimir Putin profiteering from high oil prices.

“We have a cost of living crisis, [with] much of it driven by the high level of energy cost that is being used by Putin as a weapon of getting back at us for the help that we give to Ukraine,” he said.

“So this international collaboration is incredibly important, because we have to send a message to Vladimir Putin… [that it is] not going to work to divide us.

Asked how long the UK could continue its support when the crisis is growing at home, the chancellor said prices would be “much greater” if Britain walked away and Europe has to “co-ordinate”.

Subscribe to the Sky News Daily wherever you get your podcasts

“We need to be resolute and remember why we’re doing this,” Mr Zahawi told Kay Burley. “There is war on our continent.

“Very few people predicted that. Wars happen in far flung places. And our response now [is] our ability to stay strong.

“[But] of course, we have to make sure as chancellor, as a government, we help those families that need the help, and target that help.”

‘Nothing off the table’

The minister refused to be drawn on what measures either Liz Truss or Rishi Sunak will take if they get the keys to Downing Street next week, with both candidates remaining tight lipped on their exact plans.

But he promised the Treasury had been preparing “all the options” and “there’s nothing off the table”, adding: “It would be irresponsible of a chancellor to begin to talk numbers before a new prime minister is in Number 10.”

However, Mr Zahawi admitted he was “deeply concerned” about people freezing at home this winter when they can’t turn their heating on and his “preference” was to target any help to those on lowest incomes.

How will energy prices hit households?

“I am working with the companies… to make sure those people who are really struggling get that help both financially and personally.”

He added: “My pledge to your viewers is that we will deliver the £37bn [the support package announced earlier this year]… but we’ll go beyond that because we know we need to send the message to Mr Putin that this strategy is not going to work, which is why we have to target help to the most vulnerable to allow us to stretch that help as, far as we can.

“And then, of course, make sure that we remain resolute as a coalition to continue to help Ukraine. They are paying with their lives, with their blood. What we have to do is make sure we continue.”

Big call for next PM

Fears are growing about upcoming hikes in energy bills after regulator Ofgem announced last month the price cap would rise by 80% in October – leading to the average household paying £3,549 a year for their gas and electricity.

The government has been under increasing pressure to announce more support to help homes and businesses tackle the issue.

But outgoing prime minister Boris Johnson has insisted it is for his successor to decide what moves to make.

With just days to go until the next PM is announced, front-runner Ms Truss gave the strongest indication yet that she would provide further support to households to help them with rising energy costs.

Speaking in the final hustings of the Tory leadership race in Wembley last night, the foreign secretary – who had previously ruled out “handouts” – reiterated her two main priorities of cutting taxes and securing the UK’s energy supply, but added: “In a fiscal event, the chancellor would address the issue of household support.”

She also pledged there would be no energy rationing under her premiership.

But her rival, former Chancellor Mr Sunak, gave a more cautious answer when pressed on the same topic, saying: “We shouldn’t rule anything out.”

He said he was “glad” he had brought in a windfall tax to pay for the current support on offer to households, adding: “It is absolutely the right thing to do when energy companies are making billions of pounds of profits because of a war.”

But Ms Truss ruled out using such a measure again.

Sunak supporter and Tory MP Mark Harper told Sky News that Ms Truss’ plans – which have so far focused on tax cuts rather than direct support – won’t “stick” because “they simply don’t deliver help to people”.

He added: “[Cutting] taxes is great for people who pay a lot of tax, but you can’t help people who don’t pay very much tax by cutting their taxes.”

After the new Tory leader and UK prime minister is announced on Monday, they will travel to Balmoral on Tuesday to be formally appointed by the Queen, before heading back to Westminster and facing their first PMQs session on Wednesday.