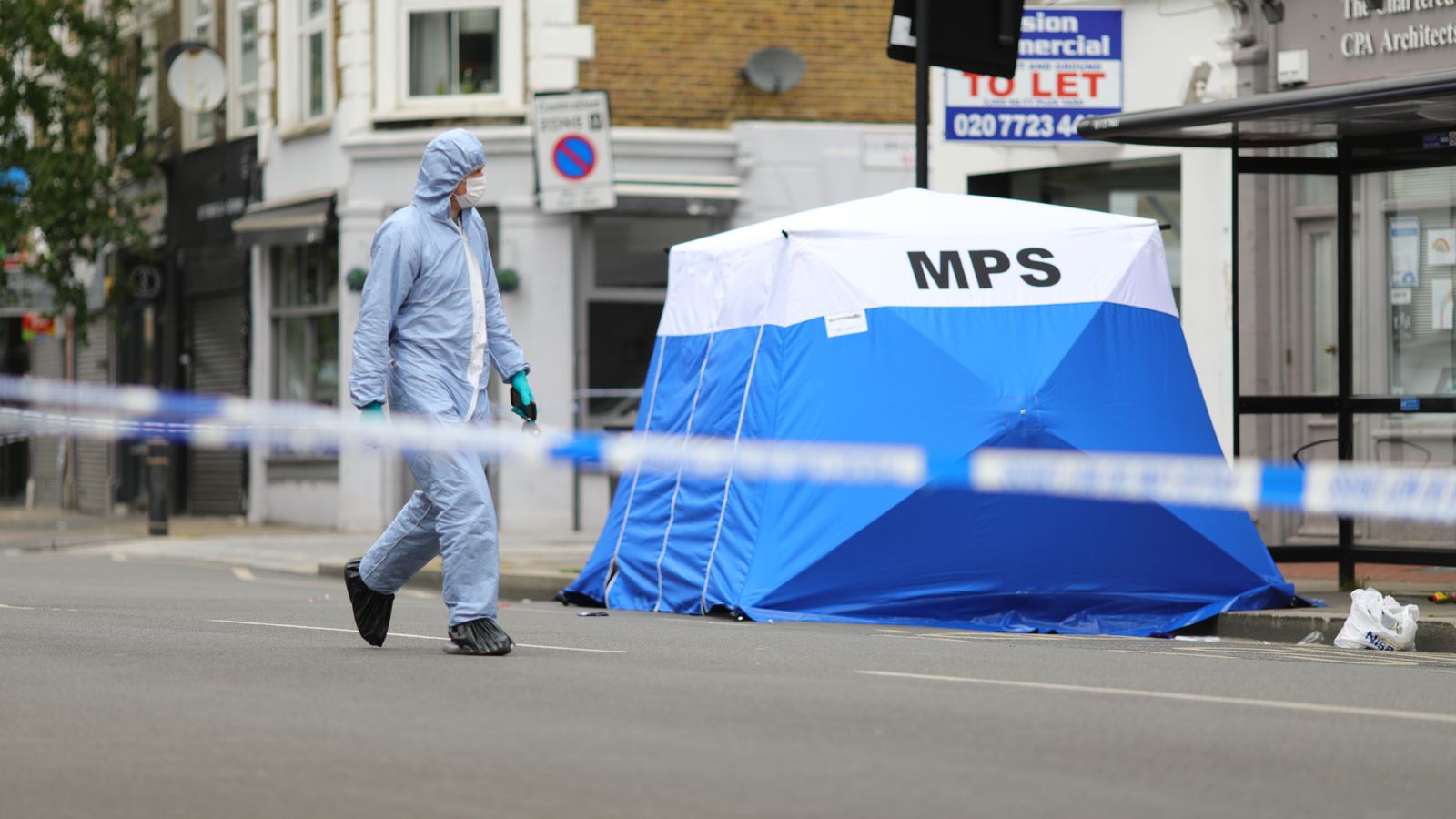 A former Gogglebox star whose nephew was stabbed to death has spoken of her “disgust” that his killers are still at large – as details of hundreds of unsolved murder and manslaughter cases in London were revealed.

Sandi Bogle, one of the original stars of the Channel 4 series, told Sky News she still cries over the death of 23-year-old Bjorn Brown, and feels “sick” knowing the people who killed him have not been caught.

New figures obtained by Sky News show 350 killings have gone unsolved in London in the past two decades – 12% of all murders and manslaughter cases in the capital – including incidents in which victims have been shot, stabbed, strangled and drowned.

More than half of victims (55%) were black or Asian – with campaigners voicing concerns that “young black men are disproportionately more likely to be victims of unsolved killings in London”.

Mr Brown, a father of one, was stabbed in Croydon, south London, in March 2017 and died from his injuries five days later.

Rapper Stormzy, a childhood friend of Mr Brown, paid tribute to him after his death and held a minute’s silence at one of his concerts.

A £20,000 reward was offered for information about Mr Brown’s killers and CCTV footage was released of two suspects, with police saying the motive of the attack was unclear.

Ms Bogle said the appeals had failed to find those responsible and there had been a “wall of silence” over her nephew’s death.

“It makes me sick to know that somebody might walk past me… and they know the person who has done it,” she told Sky News.

“It’s terrifying because [the killers] feel like they’ve got away with it so they could go and do it to somebody else.”

She added: “I think it’s disgusting that after what they’ve done, they can still get away with it and still be out there running around, living their lives, like they’ve not done anything wrong.

“I really believe people out there know who has done it, but it’s always a wall of silence.

“If they’re out there thinking they will never be caught, their conscience and guilt and karma will catch up very, very soon because I will never stop looking.”

Sky News submitted a freedom of information request to the Met Police asking for details of unsolved killings in the capital.

• A total of 2,876 homicides – meaning murder or manslaughter cases – were recorded in London between 1 April 2002 and 16 July 2022, with 350 unsolved in that period
• 113 victims of unsolved cases were killed by a “sharp instrument”, while 98 had been shot dead
• Other methods of killing in unsolved cases included arson (four cases), drowning (one case), strangulation (eight cases), poisoning (nine cases) and the use of a blunt instrument (18 cases)
• Some 85% of victims of unsolved killings were male (297), with 53 female victims
• 148 victims were black, 142 were white and 43 were Asian, while the ethnicity of 17 victims was unrecorded or listed as “other”
• A total of 128 victims of unsolved killings were under the age of 25, including 29 victims who were 15 or younger. Thirty-three victims were aged 65 or older

A Met Police spokeswoman told Sky News it records a homicide investigation as “closed” when criminal charges are brought, and the case is passed to the Crown Prosecution Service.

Ms Bogle said the number of unsolved killings was “heart-breaking” and she felt “disgust” that hundreds of killers had not faced justice for their crimes.

She said the victims’ loved ones were “going through the same pain, the same agony, the same heartbreak” as her family.

‘His son has lost a dad’

Describing the moment she learnt her nephew had been attacked, Ms Bogle said she broke down in tears and screamed after her sister told her in a phone call while she was filming.

“I felt like I was having a heart attack,” Ms Bogle said.

“Everyone was just broken. My sister was inconsolable.

“It was a sad moment. And it still is a sad moment because they still haven’t caught the people – they’re still out there.

“Every day is still a worry that they could do this to somebody else.”

She added: “We still cry. I still cry now and again because you never forget.

“He was part of our family. He was my nephew. He was my sister’s son.

“He’d only just had a kid. His son has lost a dad. It’s still heart-breaking every time you see him.

“It’s still very painful even all these years along. You never get over it.”

Ms Bogle described her nephew – who was known as Bugz to friends – as “an amazing young boy” and “very talented”.

The TV star, who appeared on Celebrity Big Brother in 2017, said she was still “very hopeful” that her nephew’s killers will be caught.

“I’m a very spiritual person and God works in mysterious ways,” she said. “I hope they’re not thinking they’ve got away with it, because they haven’t.”

In a direct message to Mr Brown’s killers, or anyone who knows their identities, she said: “You need to come forward. Justice needs to be served. I will not stop searching.”

The Race Equality Foundation said the number of black victims of unsolved killings in London showed “lessons have not been learnt” from the Macpherson report into the Met Police’s response to the murder of Stephen Lawrence.

Jabeer Butt, chief executive of the charity, which aims to tackle racial inequality, told Sky News: “That young black men are disproportionately more likely to be victims of unsolved killings in London is not a random pattern.

“It is clear that the Met continues to fail black victims, with the shockingly poor response to the murders of Bibaa Henry and Nicole Smallman, and others.”

The two sisters were found fatally stabbed in a park in northwest London in 2020 and a pair of Met Police constables were later jailed for taking pictures of their dead bodies and sharing them on WhatsApp.

Mr Butt continued: “Police leaders may point to a reduction of resources and the complexity of cases as explanations but these cannot cover up the complete lack of trust and effective engagement between the Met and London’s black communities.”

In a swipe at Cressida Dick, the former Met Police chief, Mr Butt said the force’s new commissioner must give its race action plan “the priority that their predecessor did not”.

‘Behind every unsolved murder there is a family looking for answers’

The Met Police told Sky News that detectives are “working 24/7 using all resources available to them to catch those responsible for any murder”.

Commander Paul Brogden, head of the force’s homicide and specialist crime command, said: “Our homicide investigations are strong. This year 99% of homicide cases have already resulted in criminal charges being brought and our investigations continue at pace.

“However behind every unsolved murder there is a family looking for answers.

“Homicide investigations are lengthy and complex, and in some cases do take years to come to conclusion.

“While this is incredibly difficult for those looking for answers, I want to assure loved ones that the Met has a long memory and that all such unsolved cases remain under regular review.”

He said: “It remains a tragic truth that violence disproportionately affects boys and young men, particularly of African-Caribbean heritage, both in terms of being victims and perpetrators.

He stressed: “Tackling violence is our top priority and we are working with our partners and communities to prevent violent crimes from occurring in the first place.”

In relation to Mr Brown’s murder, Mr Brogden said “it is never too late to come forward” and urged anyone with information to contact police.