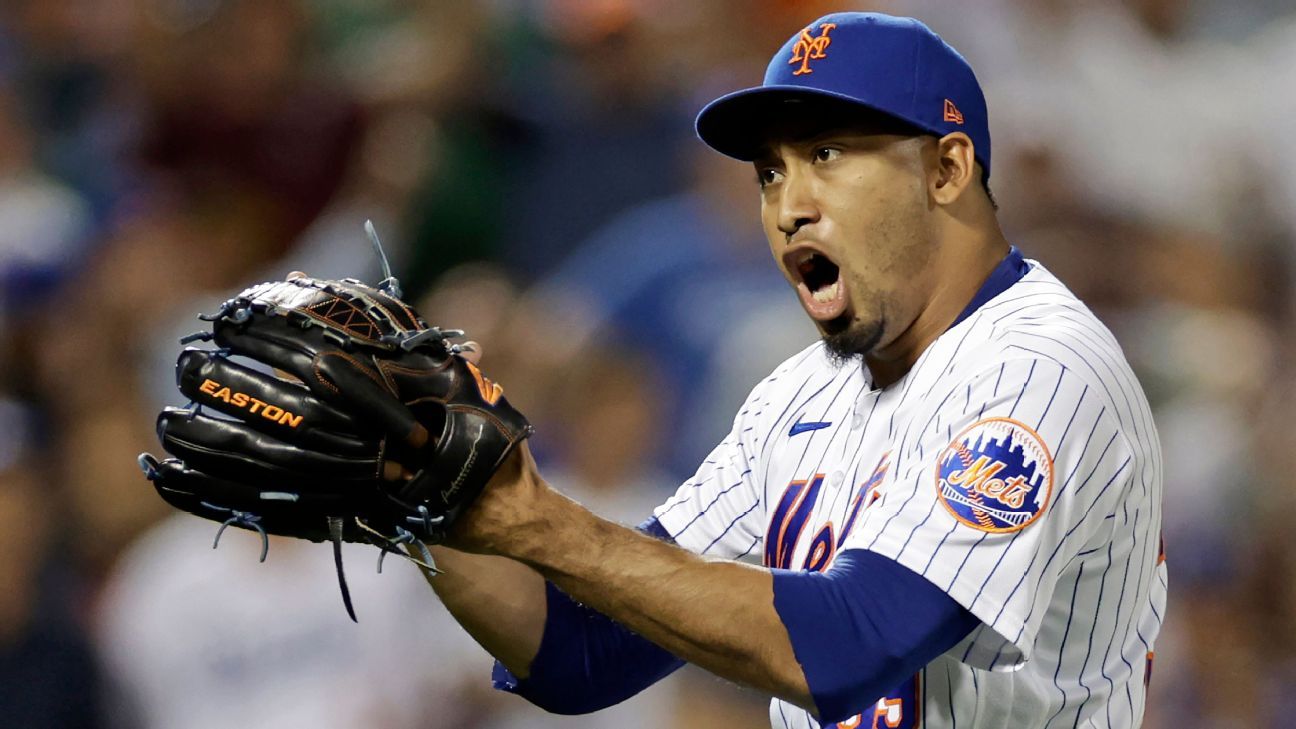 EDWIN DIAZ DOESN’T forget there was a time before he was a Mets folk hero, before Timmy Trumpet’s horns on “Narco” were the sign of an incoming New York victory, before he was the best closer in baseball.

Just three years ago, more often than not, Diaz would come home from Mets games, rest his head on his pillow and brood over what had happened at the ballpark: another game, another blown save, another home run served up in a crucial moment. In 2019, he was actively contributing to Mets losses to the tune of a 5.59 ERA (seventh worst among relievers), 15 homers allowed and -0.6 bWAR in 58 innings. After each rough outing, the same four words ran through his head, night after night, blown save after blown save.

The New York tabloids crushed his performances. Mets fans ripped the trade with the Seattle Mariners that brought him to Queens, lamenting the loss of top prospects Jarred Kelenic and Justin Dunn for an All-Star closer who now couldn’t stop giving up moonshots. Critics wrote him off as the latest athlete to wilt under the spotlight of the Big Apple.

Diaz, too, felt the pressure of being the centerpiece of a major trade for a team expecting to compete in October.

“In Seattle, it was not the same,” Diaz said. ” I didn’t see the same amount of reporters as here. On social media, things were bigger here. … The first year was tough.”

Diaz saw two paths for himself: He could let his failures overtake him, or he could use them as a hard lesson on how to manage intense pressure, high stakes and outsized expectations. Over the next two seasons, Diaz began to take the latter route, posting a 2.95 ERA and 38 saves in 89 appearances. But in 2022, he has arrived at his destination, with a 1.52 ERA, 0.90 WHIP, 1.13 FIP (the best among relievers in baseball) and 101 strikeouts in 53.1 innings pitched.

Now, as much as fans once tore him down, they have built him up.

“Everyone was saying that I was one of the worst trades,” Diaz said. “Now it’s paying off, and everyone is talking about the opposite.”

FROM HIS CHILDHOOD in Puerto Rico through his time in the Mariners’ farm system and his first three years in the big leagues, Diaz rarely struggled, cruising on his 98-mph fastball and a top-tier slider that made hitters look like they’d never seen a breaking ball before.

But after leading the American League in saves with 57 in 2018 and being dealt to the Mets in a blockbuster deal that December, something changed. The 15 ninth-inning home runs he allowed in 2019 were the most given up by a pitcher in a single season in major league history, and the thoughts of failure echoed through his head.

“I really tried to not think about that every time, but at the same time, it was always there,” Diaz said. “It’s hard to ignore that.”

After the Mets finished 86-76, missing the playoffs for the third consecutive season, Diaz went home to Puerto Rico to hit the reset button. There he began to rework his release point, which had become inconsistent throughout the course of the 2019 season. He reached out to Hall of Famer Pedro Martinez — who worked with the same personal trainer — showing him videos of his bullpen sessions. Martinez sent him feedback, giving him small adjustments centered around slowing his weight transfer on the mound.

The son of your favorite 2004 Red Sox player (and an ’04 Yankee!) is playing for the Brockton Rox this summer. Joon Lee »

When the Mets hired Jeremy Hefner as their new pitching coach that offseason, Hefner made the trip to Puerto Rico to work with Diaz.

“I didn’t really have to do a lot with him,” Hefner said. “It was more or less letting his natural abilities come out. It was just one year that was bad.”

For Diaz, some tweaks needed to be made on the mound, but the bigger adjustment came in his mindset: shifting the way he approached game days, how he handled the scrutiny that comes with playing in New York.

“In the long run, failure here can be the best thing that could’ve happened to him,” said Mets reliever Adam Ottavino, who grew up in Brooklyn and has also pitched for the Yankees. “You feel this fear of failure. It’s a shock to the system. But you fail, you get booed and then you realize you’re fine. You have that moment where it hurts real bad, but then you realize you’re the same person and it’s not a wonder how it’s going to feel anymore. You already know that’s the worst they can hurt me or I can be hurt by them.”

Diaz took to heart some tips he’d gotten from another Hall of Famer: Yankees legend Mariano Rivera. Diaz met Rivera for the first time at the World Series in Los Angeles in 2018, when he was named the American League Reliever of the Year. More than a year later, as he worked through the adjustments to his release point, Diaz would recall Rivera’s advice about being a great late-inning reliever for a long time.

DIAZ BUILT HIS confidence back, leaning on his family when he needed extra emotional support. The mental work paid off immediately, and Diaz had a strong pandemic-shortened 2020 season, posting a 1.75 ERA in 26 games before appearing in 63 games in 2021 with a 3.45 ERA and 32 saves. Mostly, he relied on what got him to the big leagues in the first place: his blazing fastball and his devastating slider.

“I knew I had the stuff,” Diaz said. “I got the stuff and I’m a player that can be one of the best in the game when I am at the top. I flushed everything away, went home and prepared my body to get back on track in 2020 and everything was going in the right direction.”

He hasn’t stopped evolving. Hefner noticed an increased focus in how Diaz approached his pregame throwing program in 2022. Before games, Diaz plays catch with bullpen catcher Dave Racaniello, and they bet $10 on whether they can hit the other’s glove accurately with each throw.

“If you’re just watching him, it can look silly, but it’s very intentional and it’s helped him take the practice to the game,” Hefner said. “There’s an intent that he takes with his program, not that there wasn’t before, but he’s taken it up a notch.”

From the Sugar Kings to the Serpientes, the South Side to Wrigleyville, we break down the best and worst of baseball’s latest fashion trend. Joon Lee »

No reliever in baseball has more strikeouts, has missed more bats or has a better fielding independent pitching. He has faced 206 batters this season and allowed just two barrels, according to Statcast. Diaz is on pace to post the fourth-highest strikeout rate ever for a reliever (minimum 40 innings pitched), having struck out 49% of his batters. This success comes with Diaz heading into free agency this offseason, where some around baseball think he could become the first reliever to sign a $100 million contract.

Mets manager Buck Showalter said the impact of having a reliever like Diaz extends beyond the close games. His success on the mound in high-leverage situations lowers the anxiety across the entire team.

“I don’t think we ever take for granted what he’s doing,” Showalter said. “One of the biggest things when you’re in a situation is how much is enough? It wears on players and the team. He’s been a guy for us that says it’s enough. He’s made leads matter.”

And while Diaz’s name has been thrown around in the National League Cy Young Award competition, Ottavino said the closer should be in the conversation for a different award.

Diaz has heard this praise from teammates and even players on opposing teams, but he knows that a bad month in September or October could turn the cheers into boos, that his historic success in 2022 can easily be forgotten with an ill-timed home run in a crucial spot in the postseason. He’s enjoyed the frenzied energy that’s developed around his Timmy Trumpet entrance, but he doesn’t let himself internalize any of it.

As long as the world needs oil and gas, we’ll give it, says UAE climate change minister
Benn fails drugs test; Eubank fight in balance
Fuel prices could rise again as oil-producing states ponder output cut
California serial killer is ‘on a mission’ but police are baffled as to what the mission is
Da Silva and Bolsonaro to face each other in run-off Brazil election