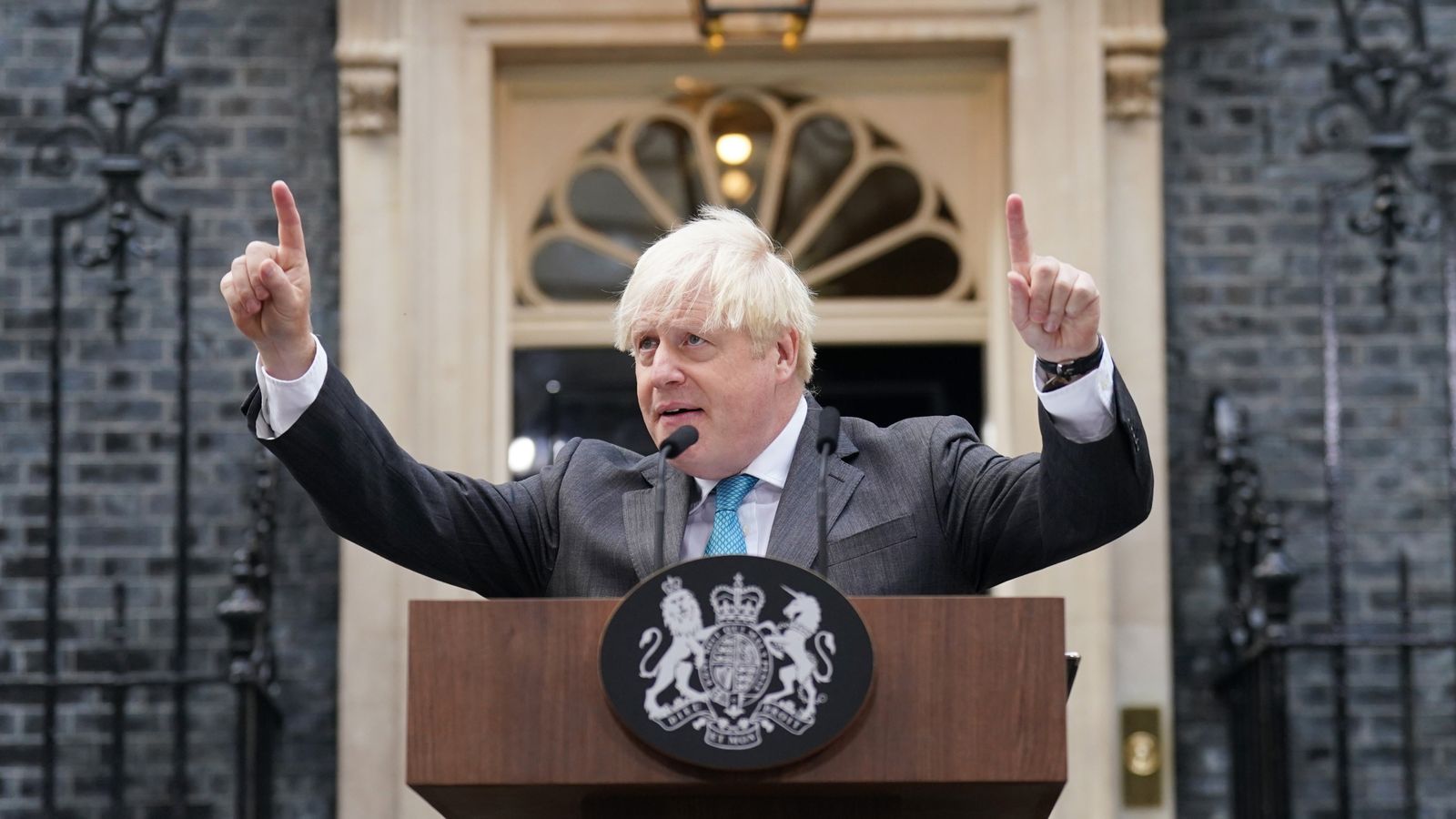 “That’s it, folks,” Boris Johnson said, flanked by dozens of his MPs and staff, as he and his wife Carrie left Downing Street for the last time.

Jovial and never emotional – that’s not his style – this was (mostly) a more good-humoured affair than his resignation speech in July, which was raw with bitterness about the manner in which he was forced from office.

Today, in his final hour, the outgoing prime minister was bullish and full of his characteristic bombast, at one point comparing himself to a booster rocket landing in the mid-Pacific.

Two months ago, when 60 government resignations forced him to leave office, he stood at the Downing Street lectern and called the decision of his party “eccentric”.

He was clear that he had tried to talk them out of it, and far from offering any remorse for partygate or the handling of the Chris Pincher debacle, declared that “them’s the breaks” and reflected that many people would be disappointed.

He has now had a number of weeks to come to terms with his predicament – with the fact that the job he has coveted since childhood, when he talked of becoming “world king”, has slipped from his grasp. He’s one of the shorter serving post-war prime ministers.

Unable to resist a final dig at his Tory colleagues he remarked: “The baton will be handed over in what has unexpectedly turned out to be a relay race. They changed the rules halfway through but never mind that now.” It was then on to his achievements – the vaccine rollout; the military aid to Ukraine which he said would change the course of the war. And some of the promises not yet met- from the much-criticised 40 “new hospitals” he’s promised by the end of the decade, the 50,000 new nurses he’s promised by the end of the parliament and “reforming social care” which the sector would say is in dire straits.

Elected to finally deliver the Brexit he campaigned for in 2016, he had little to say about its benefits. Nor, as ever, did he publicly offer regret or self-reflection.

He will be known for his force of personality and the stunning way he realigned the Tory electoral coalition to win over former Labour seats and secure an 80-seat majority. Then just over three years later, he either squandered it or had it pulled from his grasp, depending on whether you are talking to his critics or diehard supporters.

He leaves his successor with a daunting in-tray and said he expected Liz Truss to help people with energy bills and vowed that he would offer her his full support.

But will Boris Johnson go quietly? He will take some time with his family – for now. Like the Roman statesman Cincinnatus, he said: “I will go back to my plough.”

There is historical debate, as Johnson surely knows, about whether Cincinnatus, 2,500 years ago, really stayed on his farm after his time in power or in fact triumphantly returned when the Roman republic was in trouble.

Our outgoing prime minister, who remains an MP, is keeping his options open. He will also try to ensure that like Cincinnatus – history dwells on the achievements rather than the many crises of his turbulent time in power.

Unlike Theresa May, or Gordon Brown he did not dwell on the honour of the office, although he thanked and paid tribute to his staff and colleagues. It was little surprise to hear him instead press the point that he’d won the biggest conservative majority since 1987. It sounded like a defiant message to his party that they will find him a hard act to follow.