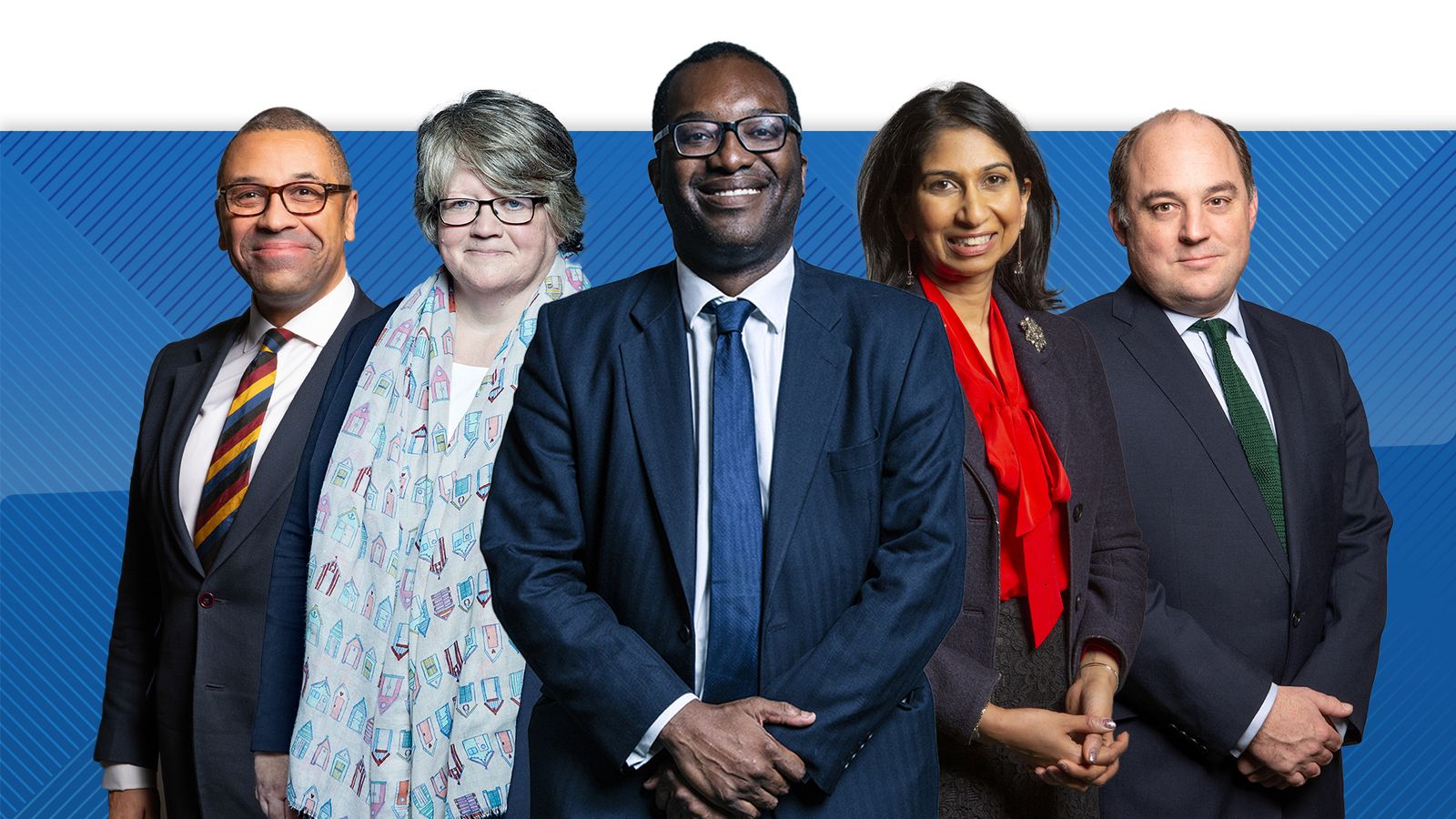 Liz Truss has begun appointing her cabinet after being officially asked by the Queen to form a new government.

Shortly after making her first speech as PM, details began to emerge as to who would be in Ms Truss’s new cabinet.

He described his appointment as “the honour of a lifetime” in a post on social media.

He replaces Nadhim Zahawi who took up the role when his predecessor Rishi Sunak quit, saying in his resignation letter to Mr Johnson that their approaches to the economy were “fundamentally too different”.

The Eton-educated son of Ghanaian immigrants, Mr Kwarteng only took up his first cabinet role last year, but has been a long-term ally of Ms Truss’s since they entered the commons together back in 2010.

On the eve of the Tory leadership election result, Mr Kwarteng wrote a piece in the Financial Times promising that Ms Truss’s government would behave “in a fiscally responsible way” as ministers seek to ease the burden of the cost of living crisis.

Mr Kwarteng will hold the purse strings in Number 11 and play a pivotal role in how the government chooses to deal with the cost of living crisis the country is currently facing.

Read more: Who is Kwasi Kwarteng?

Sky News has learnt that Mr Kwarteng has convened a meeting with the chief executives of lenders including Barclays, Lloyds Banking Group and NatWest Group just hours after being appointed to the post.

He will hold talks with the leaders of the banks on Wednesday as he tries to exert a grip on the stalling UK economy.

The former work and pensions secretary has been rewarded for her loyalty to Ms Truss and promoted to health secretary and deputy prime minister.

Ms Coffey climbed the ranks in government under former prime ministers David Cameron, Theresa May and Boris Johnson – but her position as one of Ms Truss’s closest political allies has landed her in charge of dealing with the mounting problems facing the NHS and social care sector.

She followed Ms Truss into CCHQ yesterday as the result of the Tory leadership contest was revealed, and chaired the new PM’s campaign to be leader.

Ms Truss and Ms Coffey have been close friends since running for parliamentary candidate selection together in 2009 – Ms Truss got the Norfolk seat they both went for but Ms Coffey then got the nearby seat of Suffolk Coastal.

Reports on Monday suggested that Ms Coffey has already been receiving briefings on the NHS from top civil servants at the Department for Health.

The importance of the role of deputy prime minister was illuminated in 2020 when Dominic Raab was put in charge of running the country while Mr Johnson was hospitalised with COVID.

James Cleverly – a fellow loyalist of Mr Johnson and someone who has previously worked in the Foreign Office as a minister for two years – has been promoted to foreign secretary.

He replaces Ms Truss herself who never resigned from her role before partaking in her successful party leadership campaign.

When Ms Truss was foreign secretary, Mr Cleverly effectively acted as her deputy.

Mr Cleverly, who has also held the role of deputy Conservative Party chairman, was one of the three individuals appointed as education secretary in just three days in the dying moments of Mr Johnson’s government.

Ms Braverman, another former leadership hopeful, went on to endorse Ms Truss after she was eliminated from the contest.

She replaces Priti Patel who confirmed her intention to resign from the post on Monday evening after three years of running the Home Office.

Ms Braverman has been an advocate of her predecessor’s Rwanda plan, commenting that she had “significant reservations about our relationship with the European Court of Human Rights” following the European court’s decision which effectively grounded the first flight aiming to send asylum seekers out of the UK earlier in the summer.

Ms Truss has decided that Ben Wallace will remain as defence secretary, a position he has held since 2019.

Mr Wallace supported the new PM in her campaign to become party leader and is a firm favourite among Tory members.

He had been tipped to be a frontrunner in the leadership race himself, but decided not to make the bid.

Mr Wallace has won praise for his handling of the Ukraine war and is considered well-liked among Conservative members.

He was also lauded for overseeing the evacuation of refugees from Afghanistan.

Jacob Rees-Mogg, the former minister of state for Brexit opportunities and government efficiency, has been promoted to business secretary.

The role was left vacant after Mr Kwarteng was elevated to chancellor.

Mr Rees-Mogg has been a vocal advocate of reforming workers’ rights and has in recent months orchestrated a campaign to encourage civil servants to stop working from home.

His appointment is another clear signal that Ms Truss believes keeping loyalists of Mr Johnson onside is important.

But the move is unlikely to be popular with the unions, with Mr Rees-Mogg recently calling railway workers joining picket lines as “selfish”.

It had been reported that Mr Rees-Mogg had held talks with oil companies in recent days in anticipation of him taking on the large responsibility of dealing with the energy crisis.

Former Northern Ireland secretary Brandon Lewis has been rewarded for his loyal support to Ms Truss by being promoted to justice secretary.

Reacting to his appointment, Mr Lewis said: “I look forward to working with Liz Truss and colleagues across government on the many pressing issues we face.

“I will work tirelessly to protect the public from serious offenders, improve the safety of our prisons, reduce reoffending and deliver swift access to justice for all.”

Mr Lewis has also served in cabinet roles under both Mr Johnson and Mrs May and replaces former justice secretary Dominic Raab, who was the first to reveal his departure from the front bench this afternoon.

Replacing Michael Gove, former chief secretary to the Treasury Simon Clarke’s loyalty to Ms Truss has earned him the role of levelling up, housing and communities secretary.

Mr Clarke, who is the MP for Middlesbrough, has experience with the brief having previously been a minister in charge of regional growth.

Chris Philp, who has held numerous government roles in a range of departments including justice, the home office and culture, media and sport takes up Mr Clarke’s former position in the Treasury.

Former Chancellor of the Duchy of Lancaster and policing minister Kit Malthouse has been appointed education secretary.

Mr Malthouse was a close ally of Mr Johnson but had supported Ms Truss in her campaign to become Tory leader.

Former transport minister Wendy Morton has been appointed as chief whip and will also attend cabinet.

She is the first female Conservative to take on the role and previously worked as an assistant government whip under former PM Mrs May from 2018 to 2019.

Alister Jack has been re-appointed as Scotland secretary, with Robert Buckland holding on to his post as secretary of state for Wales.

Anne-Marie Trevelyan, who worked closely with Ms Truss when she was international trade secretary in Mr Johnson’s government and Ms Truss held the foreign brief, has moved transport to become transport secretary.

Ms Trevelyan is likely to be thrown in the deep end with an autumn of rail strikes planned by workers.

Meanwhile Michelle Donelan, another of the MPs to briefly hold the post of education secretary during the final moments of Mr Johnson’s government, is to become the culture secretary.

She replaces Nadine Dorries who decided to stand down from the role, despite claiming Ms Truss had offered her the chance to keep her position.

Formerly short-lived chancellor Nadhim Zahawi has been appointed as Chancellor of the Duchy of Lancaster and will head up the Cabinet Office.

Ms Truss has previously expressed her wish to scale back the Cabinet Office as part of a wider plan to reduce central control.

Mr Zahawi has also been appointed minister for intergovernmental relations – a role created for Michael Gove – which means he will be in regular conversation with Scotland’s first minister, Nicola Sturgeon, and the first minister of Wales, Mark Drakeford.

He has also been given the role of minister for equalities.

Another former Conservative leadership contender, Penny Mordaunt, has also been appointed to a role in Ms Truss’s government – leader of the House of Commons.

Ms Mordaunt backed Ms Truss after being ousted from the contest in the final knock-out round.

She was the early bookies’ favourite and the darling of party activists according to several polls during the leadership race and will replace former commons leader Mark Spencer.

Meanwhile, Lord True – a Conservative life peer – has been appointed leader of the House of Lords.

Elsewhere, Jake Berry – chairman of the Northern Research Group of MPs – has been appointed as Conservative Party chairman.

The move is likely to be seen as a key symbol that Ms Truss wants to continue to follow her predecessor Mr Johnson’s levelling up commitments.

Kemi Badenoch’s strong performance in the Conservative leadership contest has earned her the role of international trade secretary.

She has previously served both in the Treasury and equalities office.

Ranil Jayawardena’s support for Ms Truss has earned him his first cabinet role as environment secretary – replacing George Eustice, who returns to the Conservative back benches.

Alok Sharma has been asked to stay on as COP president ahead of the next United Nations climate change conference, COP27, which is to be held in Egypt in November.

Ahead of cabinet appointments being announced by the new PM, some members of Mr Johnson’s government who had supported Ms Truss’s leadership rival Mr Sunak confirmed that they would not be part of her top team.

Alongside Mr Raab who said he would be “supporting the government from the backbenches”, former transport secretary Grant Shapps announced his cabinet departure with a promise to be “a strong, independent voice” on the back benches.

Steve Barclay – who most recently served as health secretary, but has also held roles in both the Treasury and the Cabinet Office – also confirmed he would not be featuring in Ms Truss’s government.

As did Greg Clark, who said he had enjoyed fulfilling the role of levelling up secretary “enormously”.

Johnny Mercer, Mr Johnson’s veterans’ affairs minister, said he was disappointed” to have been “relieved of my duties in government”.

While former Northern Ireland secretary Shailesh Vara and former Conservative Party chairman Andrew Stephenson also confirmed on social media that they would not be a part of Ms Truss’s top team.