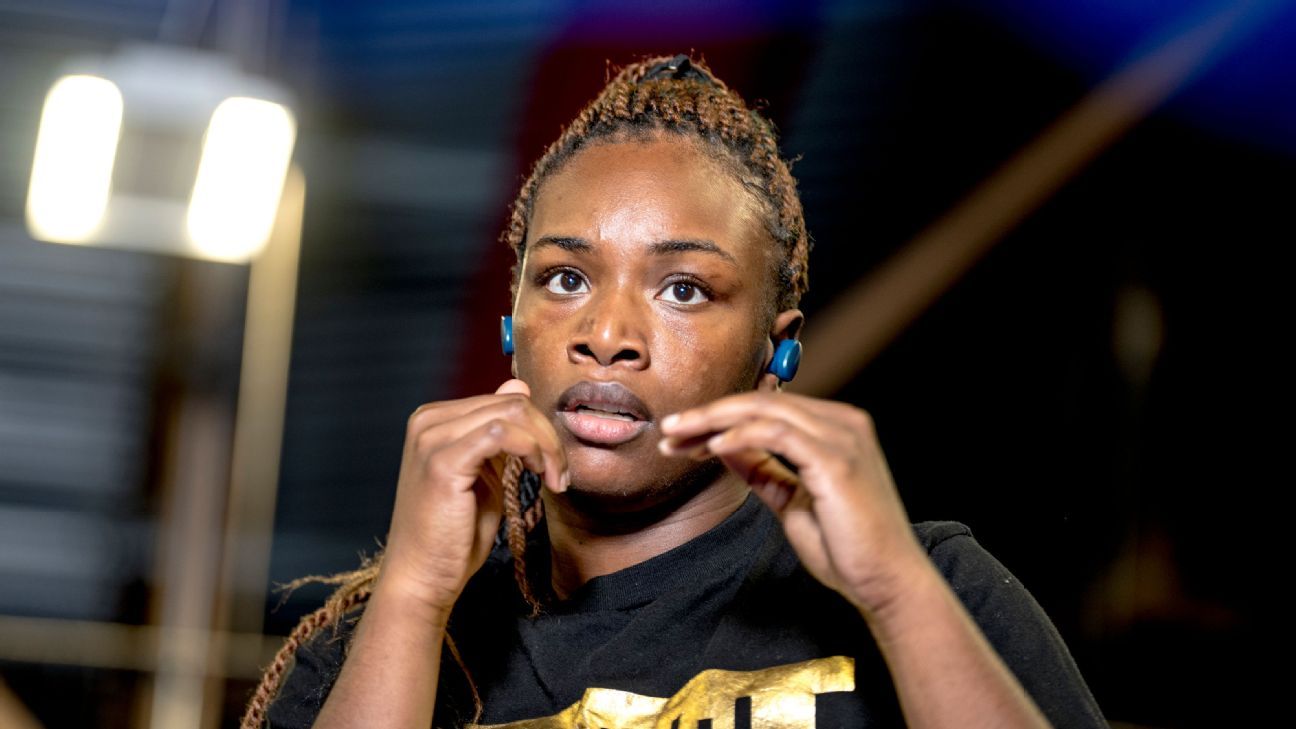 THE PROMOTER, TRAINER and fighter were in a chauffeur-driven car heading to a press conference in London earlier this year, and Dmitry Salita couldn’t help himself. He’s always been a big James Brown fan, and the serious promoter with a wry sense of humor found a chance to offer some levity with a message.

Salita’s fighter, Claressa Shields, was heading to the first press event to publicize her fight Saturday against Savannah Marshall (2 p.m. ET on ESPN+). The winner will become the undisputed middleweight champion of the world. Salita’s message in song was clear.

Hey, gotta, gotta payback! Revenge! I’m mad. Got to get back!

As the lyrics to “The Payback” blared in the backseat, Salita, Shields and trainer John David Jackson started laughing. The words came across as a reference to the only blemish on Shields’ boxing record, amateur or professional — when Marshall beat her a decade ago at the 2012 AIBA Women’s World Championships.

Top Rank Boxing is now on ESPN and ESPN+. Subscribe to ESPN+ to get exclusive boxing events, weigh-ins and more.

Shields has grown so much as a fighter since then. But a message is a message. A theme is a theme.

“You know what, man? This is what it is,” Salita said. “So I started playing that song in the car and everybody started laughing and joking around. Claressa got the spirit in her.”

It brings up an interesting question: How much is this fight truly payback for something that happened 10 years ago? Shields was a teenager back in 2012, and had not yet won her two Olympic gold medals, turned pro and become a multi-division undisputed world champion.

Back then, Shields was still a young woman sorting through life and not the woman she’s become. She’s dramatically changed who she is as a fighter, setting herself up for her many accomplishments.

Shields drives home that point when she reflects back on her first meeting with Marshall. Yes, she lost. But look at all she’s done after. Not many people are the same at 17 years old and 27 years old (her age today).

Legacy matters, though. Belts matter. Accomplishing history, which Shields has done time after time throughout her amateur and professional career, has been a benchmark for almost every fight she’s taken over the last half-decade. The Claressa Shields you see now is different from the one of a decade ago. Different even from the one you might have seen a year ago.

FIGHT CAMPS ARE are never easy. You’re preparing to go into a ring against an opponent whose goal is to knock you out. So training is hard. Preparation is intense. Shields has been through all of this before.

Yet in this camp she has felt more at ease than in the past. Maybe it’s maturity. Maybe it’s confidence. Shields said she wanted to appreciate everything. Savor it.

It’s how she’s approached everything with regards to this fight.

Shields has been cognizant of staying in this moment. She recognizes the magnitude of what she’s doing — headlining an all-female card in London in one of the biggest fights of this year.

She’d come close to having the Marshall rematch before. Both she and Salita said they offered Marshall a fight at 168 pounds earlier in Shields’ career, but it didn’t come together. But now the fighters have a bigger audience. A bigger payday.

For this camp, Jackson said Shields used primarily female sparring partners — a departure from the past. The camp included mutual training last month with Shields’ onetime opponent, WBA junior middleweight champion Hannah Rankin, who has a title defense against Terry Harper on Sept. 24.

“The first day of sparring, I walked over to Hannah’s coach and I said, ‘Are these guys friends?'” Jackson said. “Because they are throwing some hellacious shots at each other. Friends don’t do that. But that was a good day for both of them.”

While the camp was fun for Shields, it was also another step in her evolution as a fighter. Something she’s been working toward for a while — a crafting of her style to make one of boxing’s most technical fighters even more dangerous.

ONE OF THE things Shields learned over the past few years is the folly of obsessing over perfection. Every fighter, even the greatest of the great, has weaknesses. Instead of dwelling on hers, she learned to embrace whatever she felt was weak about her abilities while working to make the best of her skills.

“Some weaknesses are good weaknesses, though,” Shields said. “And people don’t like to say that, but some of the weaknesses that some fighters have in boxing works for their style. So it’s like, do we fix that weakness? Or do we leave it there?

“You don’t have to fix every weakness because it may not be the best for your style.”

Monday through Friday, host Pablo Torre brings you an inside look at the most interesting stories at ESPN, as told by the top reporters and insiders on the planet. Listen

In some ways, Shields still seeks perfection, but she also understands fixing one thing could cause issues elsewhere. If it doesn’t hurt how she fights, it’s OK for a weakness to exist.

Shields has always been good at fighting both inside and outside. She has good defense and can quickly read what her opponent is going to do and make herself ready for it. It’s why she’s gotten to 12-0 as a pro, fighting in world title fights from the fourth fight of her career on. But she’s also acknowledged where she needs improvement.

Jackson has wanted Shields to show patience, to sit on punches more and be more strategic with combinations. As an amateur, it was just throw, throw, throw for Shields until she couldn’t throw punches anymore. Jackson acknowledges that was a smart amateur style, and he gives Shields’ amateur coach, Jason Crutchfield, a ton of credit. He helped make her a champion.

“She was too eager to try to knock you out,” Jackson said. “And she wasn’t getting knockouts. … You need to slow your punches down and sit on them with more weight. Your opponent is going to feel that more.

“Now, especially with this fight here, she’s understanding that.”

It took Shields time to figure things out because for so long, she was accustomed to the point system in amateurs. She now knows how different punch combinations alter a fight differently, depending on when and how she throws them.

She has worked on the adjustment constantly — in sparring, on bags and pads, with coaching.

“Now everything is kind of starting to come together,” Shields said. “But it just doesn’t happen overnight.”

IF THERE’S A lesson in a decade-old loss, it was what happened afterward for Shields. Not the 2012 and 2016 Olympic gold medals, but the more immediate reaction from those around her.

Back then, Shields was a long way from the homeowner with the new 2022 orange Chevy Camaro that she is now. She was balancing high school and elite amateur boxing. That loss to Marshall? “It was a nightmare,” she said.

When Shields returned after the fight to high school, where she was a junior, all she heard about was the loss. Not the double-digit wins she’d accumulated. No one mentioned that she’d beaten three-time world champion Mary Spencer a month earlier.

Nope, it was all loss, all the time. Shields said that taught her how those she thought wanted her to succeed could take equal enjoyment out of her one failure.

“It just showed me who’s real, who’s fake,” Shields said. “Who’s for me, who’s not. Which is something that we all want in our lives. So I only want real, real people around me. Real support. Real love.

In the aftermath of the loss to Marshall, Shields picked herself up and won her first Olympic gold medal later that summer in London. She was on her way to becoming the future of the sport.

Now Claressa Shields is no longer the future of women’s boxing. She’s very much the present. Has been for a while. And if all goes well for her on Saturday, she could remain at the top for a long time to come.

Native American accepts apology from Oscars after abuse in 1973
USMNT has no answer for Japan in friendly loss
FTX in talks to raise up to $1 billion at valuation of about $32 billion, in-line with prior round
NBArank is back! See which stars barely missed the top 25
‘India has a big role to play’: New Delhi is trying to turn the country into a chip powerhouse