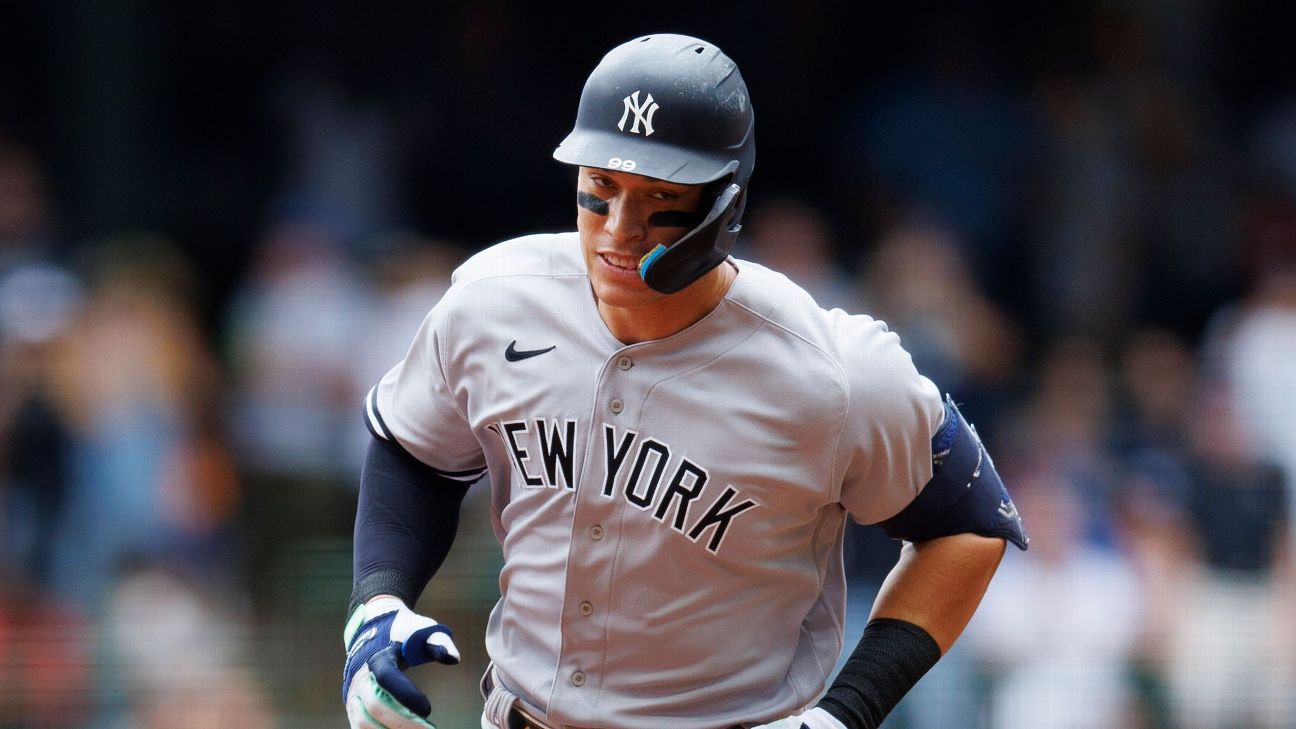 MILWAUKEE — Yankees star Aaron Judge turned in perhaps the best game of his historic season Sunday, hitting two home runs, a double and a single, driving in four runs and setting himself up to break the American League single-season home run record at home this week.

Judge, as he is wont to do, downplayed his individual effort in the Yankees’ 12-8 victory over the Brewers, saying: “We’ve got some big games coming up. That’s really the only thing on my mind right now.”

But around the Yankees’ clubhouse, all anyone could do was marvel at the 30-year-old outfielder, whose 59 home runs are two shy of Roger Maris’ AL record, 127 RBIs lead all of baseball and .316 batting average is one point shy of earning Judge a potential Triple Crown.

His 59 home runs are the most by a right-handed batter in AL history, according to ESPN Stats & Information research.

“Sorry to repeat the same line, but it’s historical,” Yankees starter Gerrit Cole said. “I got nothing else for you. It’s the greatest offensive season that I’ve personally ever witnessed. I don’t know what else to say. I mean, it’s wonderful. I’m riding it, dude. It’s amazing.”

Amazing may not be adjective enough to describe what Judge is doing. On Sunday, he raised his September line to near-unthinkable numbers: a .491 batting average, a .586 on-base percentage and a 1.018 slugging percentage. His season line is now .316/.419/.701 — the highest slugging percentage since Barry Bonds in 2004 and potentially the first .700-plus slug season since Mark McGwire in 1996.

Starting Tuesday, the Yankees will play six consecutive games at home — two against the Pirates and four against the Red Sox, culminating with a Sunday night game against Boston on Sept. 25.

“Obviously we’re in a pennant chase, and Judge sitting where he is, so there’s gonna be that added buzz every time he comes up,” Yankees manager Aaron Boone said. “I experienced that playing in the NL Central playing against Sammy [Sosa] and McGwire in ’98 where it’s like every time — it’s an event. And I think the fact that we’re where we are in the pennant race and what he’s doing hopefully should create for an awesome environment at the stadium.”

Judge’s 11th multihomer game tied the season record set by Detroit’s Greenberg 1938 and matched by the Chicago Cubs‘ Sosa in 1998.

Nobody has helped his team win more than Judge, who is on the precipice of turning in the 47th season in the Live Ball Era with more than 10 Wins Above Replacement, according to FanGraphs. The Yankees now hold a 5½-game lead over the Blue Jays in the AL East.

With the buzz of 62 increasing, and the possibility of a Triple Crown now in play — he’s one batting-average point behind the Twins‘ Luis Arraez, who’s hitting .317, and percentage points behind Boston’s Xander Bogaerts at .316 — at least one person isn’t paying attention: Judge.

“It’s all noise,” Judge said. “I got a job to do on the field and I’m focused on doing that. We got a long way to go. There’s quite a few games left this month and the playoffs ahead of us. So I’m staying locked in on that.”

“I’ll tune it out,” he continued. “I try to stay off all that stuff as much as I can, because it’s really no good. You have a bad game, they’re gonna say some things. You have a good game, they’re gonna say some things. So I try to stay off it throughout the year and just focus on what I gotta do here and focus on helping this team and listen to the opinions from my teammates and coaches. Those are the ones that matter to me.”