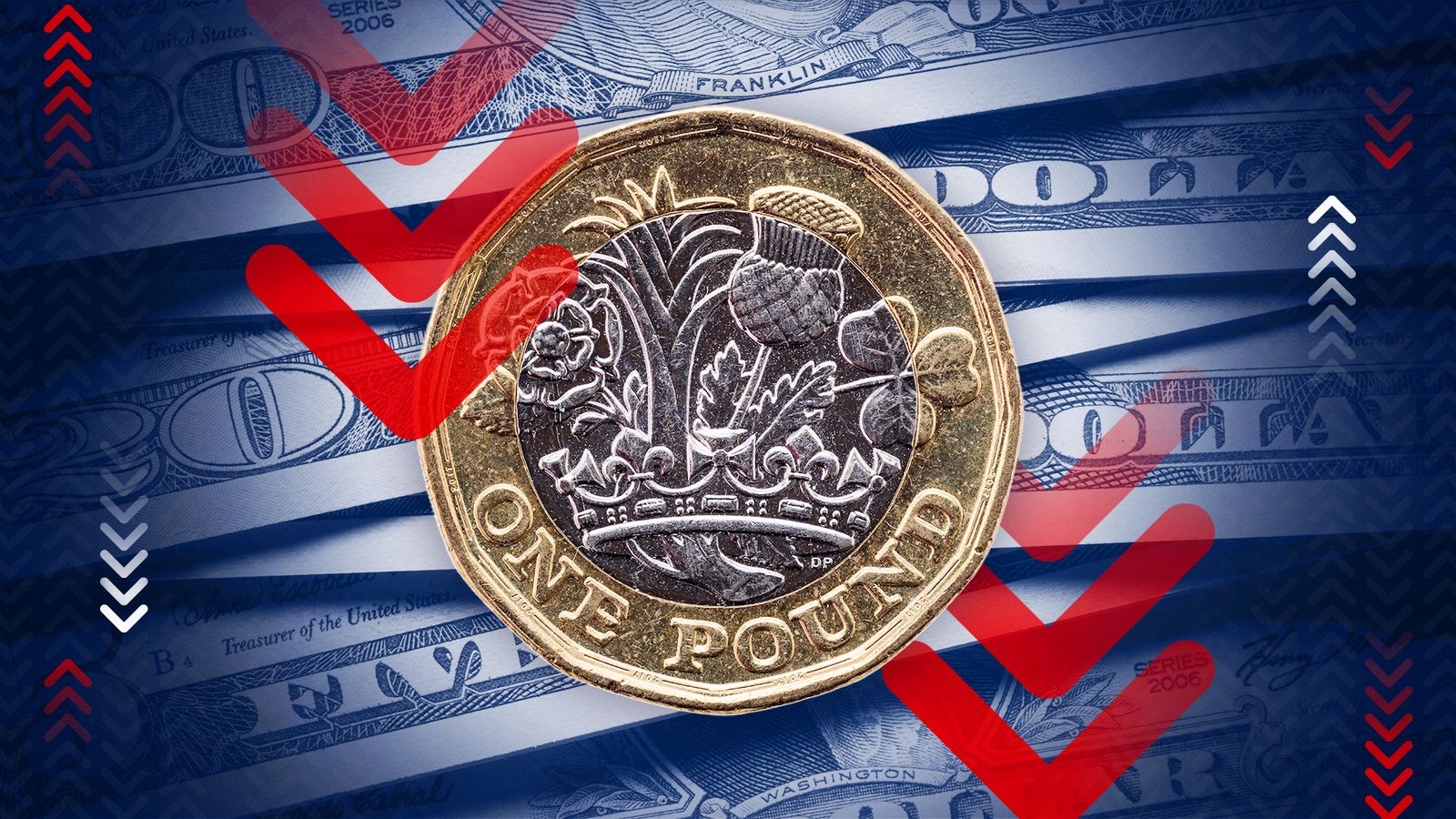 The overnight fall in the value of the pound, descending to its lowest level against the dollar since decimalisation in 1971, matters because of what it says about global market confidence in the UK economy.

The plunge in sterling’s value, against a backdrop of a strong dollar globally, gathered speed on Friday following the publication of Chancellor Kwasi Kwarteng’s growth plan.

Here, Sky News explains why sterling’s slump matters for you and what it says about the UK’s medium-term prospects.

Since Liz Truss became prime minister, sterling has been acting as an unofficial test of confidence in her leadership.

Hovering at around $1.14 in the days preceding Friday’s fiscal statement it plunged once Mr Kwarteng concluded his speech, falling more than 3% to $1.08 by the end of the day, an unprecedented response to a financial statement.

Panic amid rumours of Bank intervention – cost of living latest

The weekend gave the chancellor and colleagues a chance to provide more context for a statement that, with no spending plans or OBR forecast, included only one half of the balance sheet.

Rather than add detail, Mr Kwarteng chose to promise further tax cuts which failed to ease market anxiety, leading to further falls, the opposite of a vote of confidence in the UK’s new leadership.

The currency markets are reflecting concern that Mr Kwarteng’s plan is not viable.

The chancellor promised tax cuts of £45bn on top of an energy bailout for business and consumers that could cost £60bn this year.

The intention is to deliver a faster growing economy that generates more tax revenue, which in turn can be used to service the debt incurred to pay for it.

By selling the pound however, investors are expressing doubts about whether that is viable given inflation is already running at 10%.

With tax rises effectively pumping more money into the economy, investors reason the Bank of England may have to increase interest rates even more sharply than expected to try to hold inflation in check.

Bank rate went up 0.5 percentage points on Thursday and there are now questions as to whether an emergency rate rise before the next scheduled decision in November may be necessary to prop up the pound.

This interaction, between soaring government borrowing, record inflation and a weak currency has been termed a “doom loop”, and it is a phrase heard on City trading floors on Monday morning.

The falling pound is bad news for UK importers and anyone who trades in dollar commodities, which includes anyone planning on filling a car with petrol or diesel in the coming days. Oil is priced in dollars, which means it will get more expensive in real terms for UK consumers.

However, one piece of good news is that the currency influence will be offset by falling oil costs. Brent crude was trading on Monday at $85 a barrel, far below its early Ukraine-Russia war peaks way of above $100.

The pound has weakened against the euro too which will have implications for the 50% of UK food that is imported from the continent. Anyone planning a European break in the October half-term, or a trip to the US anytime, will not look forward to visiting the bureau de change.

However, a weak currency is not bad news for everyone.

UK exporters might see more interest given their goods have become cheaper for the rest of the world, and there was a modest positive impact on stocks and shares traded on the FTSE 100, where many of the largest multinationals count their earnings in dollars.

By contrast the FTSE 250, which is largely made up of domestic companies earning in sterling, was down slightly.

Just as significant as the falling value of the pound is the trajectory of UK gilts – the bonds issued by the government when it wants to borrow money from the markets.

Since the statement on Friday the yield on UK 10-year gilts – effectively the interest rate government has to pay investors for the loans – has risen, reaching a 12-year high on Monday morning of 4.1%.

So at the very moment the government plans to massively increase borrowing, the cost is rising as a consequence.

That is why what happens in the markets is being watched so closely at the Treasury, the Bank of England as well as No 11 Downing Street and on the Conservative backbenches.

What ex-CIA director noticed about Trump’s response to DOJ investigation
10-man Wales lose to Iran in World Cup after suffering two late goals
Hawaii residents told to prepare for evacuation amid Mauna Loa gas and ash warnings
Father and siblings of Idaho victim speak to CNN about investigation
What is Alzheimer’s, how common is it – and will new drug Lecanemab help patients in the UK?