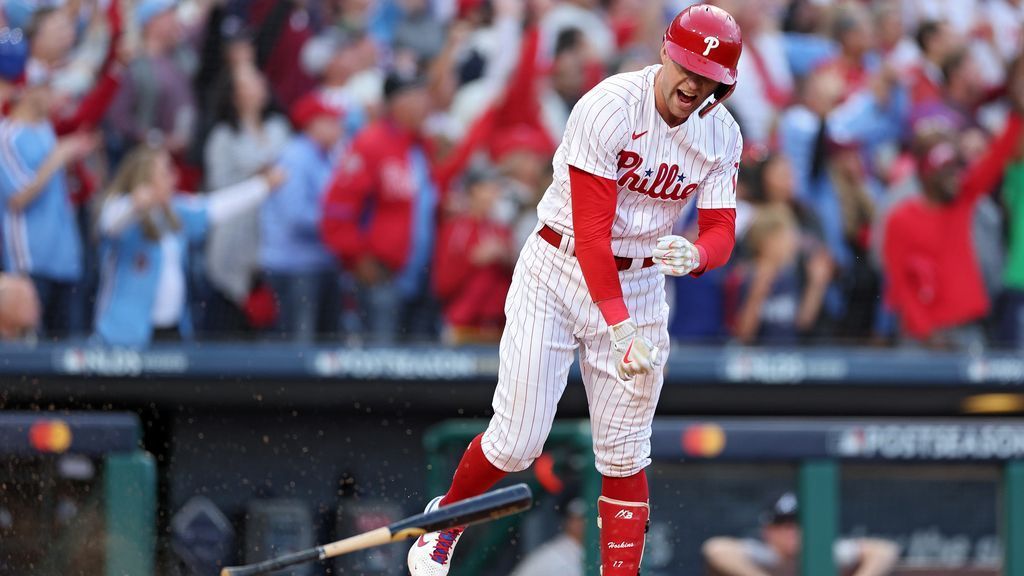 PHILADELPHIA — It’s not like Philadelphia Phillies first baseman Rhys Hoskins needed extra motivation, but when the Atlanta Braves walked Kyle Schwarber intentionally, just before Hoskins stepped to the plate in the third inning of Game 3 of the NLDS on Friday, his focus narrowed just a little bit more.

“Yes, of course,” Hoskins said after the Phillies 9-1 win. “I’m human. I’m a competitor. They’re obviously telling me something right away before I even step in the box.”

The move told Hoskins the Braves would rather face him than Kyle Schwarber who was 0 for 17 in the series to that point. One of the longest tenured Phillies made Atlanta pay when Hoskins jumped on starter Spencer Strider’s first pitch for a three run home run, igniting a raucous Philadelphia crowd.

Strider was returning from an injury and hadn’t pitched since Sept. 18. After two solid innings on Friday, he began to tire.

“We wanted him to go four, originally,” Braves manager Brian Snitker said. “And then I thought if he could get out of that third then that’s going to be it. But it didn’t happen.”

Phillies manager Rob Thomson said Strider’s stuff “went down a little bit” in that fateful inning and his hitters were ready. Hoskins pounced on a fastball, barely remembering his soon-to-be viral bat spike after hitting the ball into the left field stands.

“I didn’t know what I did until a couple innings later, really,” Hoskins stated. “It’s just something that came out, just raw. But God, it was fun.”

Right fielder Bryce Harper celebrated by doing a flip of his own.

“I threw my bat at the same time that Rhys did, and my helmet,” Harper said. “I was really excited.”

A few moments later, Harper added to the mayhem with his own long ball, a 2-run shot off reliever Dylan Lee. It helped put the game out of reach as the Phillies scored six times in the inning. Citizens Bank Park went wild.

“The crowd tonight was incredible,” Harper said. “Absolutely insane. Electric. Nothing that I could have ever dreamt about. It was ‘whoa,’ I’m getting chills again because that was unbelievably cool.”

You can understand the fans rabid interest, considering the Phillies haven’t been in the postseason since 2011 and the fact this year’s team hadn’t even stepped foot in their own ballpark in three weeks. Philadelphia ended the regular season on a 10 game road trip then went right to St. Louis where they beat the Cardinals in the wild card round.

That was followed by two games in Atlanta before finally returning home to take a 2-1 lead in the best-of-five divisional series against the defending champions. Harper said the team always believed they would be in this position.

“I didn’t think there was any doubt,” he stated. “You go on the road 19, 20 days, never seen that before. For us to come back here and take the home field advantage away from Atlanta…and come back here, win game one here, is huge.”

The Phillies can advance to the NLCS with a win on Saturday in Game 4. Manager Rob Thomson announced righty Noah Syndergaard will start for him. Charlie Morton will get the ball for Atlanta.

With the crowd being such a big part of Game 3, players were imagining what it might be like in a clinching situation on Saturday.

“We knew the crowd was going to be a factor, a huge factor,” Hoskins said. “We heard about it. And like Bryce said, it blew expectations. It was a huge part, I think, of the victory because as stuff starts to snowball and they get louder, then more good things happen and they get [even] louder.

“So we’ll see if we can continue that tomorrow.”

Neither team has announced a Game 5 starter, which would take place on Sunday back in Atlanta. That’s only if the Braves can extend the series with a victory on Saturday.

Elon Musk has criticized Apple for years. Apple has mostly ignored him
Hear what struck ex-FBI official about Idaho murders investigation
UK ‘is already in a recession which is expected to last into next year’
First trailer and title revealed for Ford’s fifth and final Indiana Jones film
Albanians ‘should be barred’ from claiming UK asylum, minister says