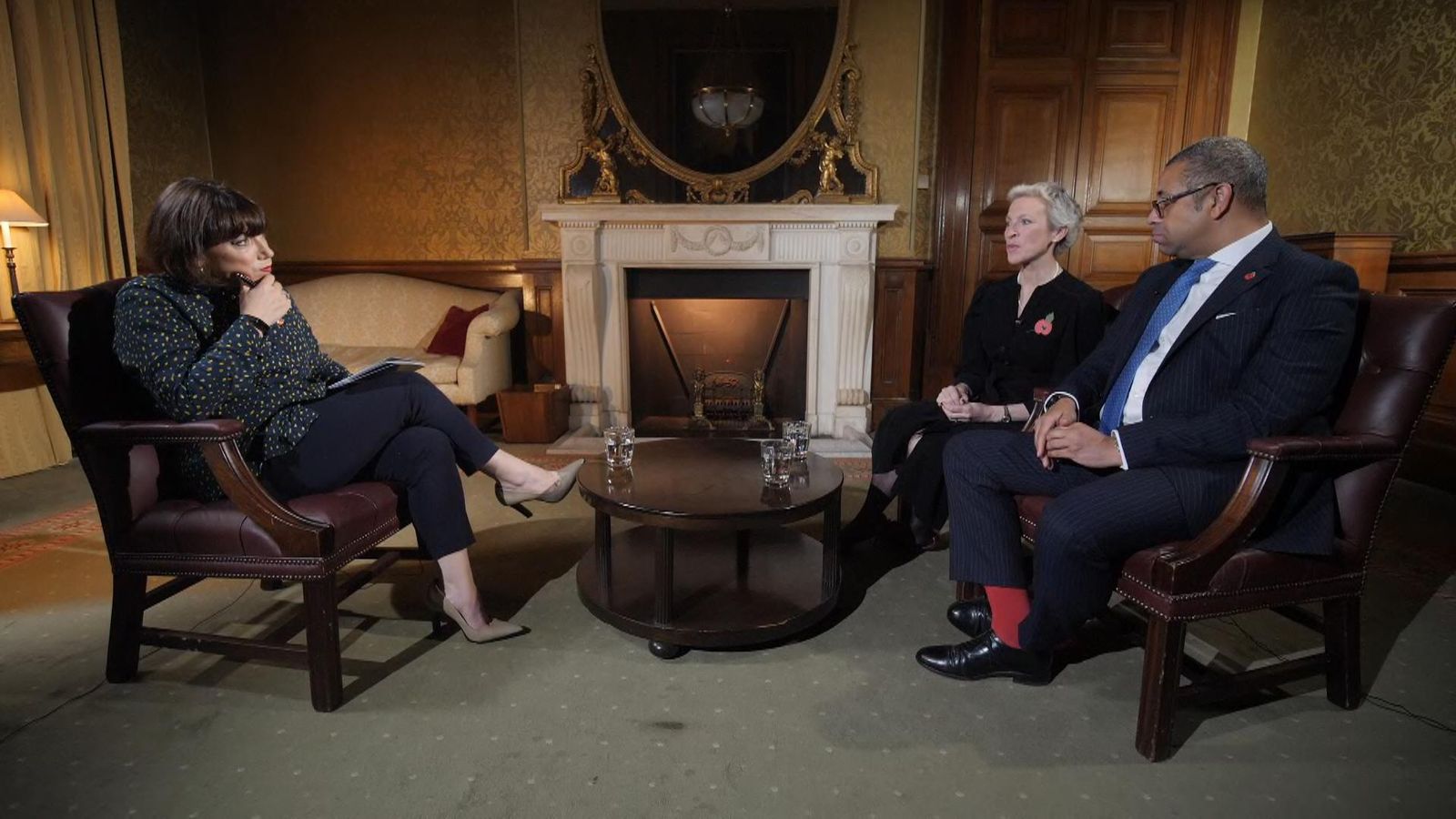 Foreign Secretary James Cleverly has said he “could not speak or sleep” when he found out his wife had breast cancer.

Susie Cleverly, 49, was diagnosed with triple positive breast cancer in December 2021 after spotting dimpled skin underneath her right breast the month before – nearly a year ago to the day.

At the time, her husband was a minister in the Foreign Office, where Liz Truss was foreign secretary in the Boris Johnson administration.

The couple, who have been married for 29 years after meeting at university and have two teenage sons, spoke to Sky News’ Beth Rigby Interviews… programme about her diagnosis, how they have coped, and what it has been like to handle it all while holding one of the great offices of state.

After being diagnosed, Mrs Cleverly rang her husband, who was on the train into Westminster, and told him the doctor thought it was cancer.

“I just burst into tears and I think I cried most of that day,” she said.

‘I just couldn’t get the words out’

“I had to ring my private secretary in the Foreign Office saying ‘can you cancel meetings because I need to go home’, and he said ‘is everything okay minister?’

“I said I’ll text you, and, you know, this organisation is amazing. Liz Truss was my boss at the time, she was absolutely amazing.

“I went home, Susie and I talked it through, and I tried to ring again to explain what was going on – and I still couldn’t say a word.

“For the next couple of hours everything was done on WhatsApp, and it really hit me, I never felt anything like that before.”

‘The most frightening word was cancer’

Mrs Cleverly then had about eight mammograms in one day, but they could not see anything until a scan found three lumps in her breast and a node in her arm.

After an MRI, the doctors found more than 12 lumps.

“I wasn’t scared when they told me that,” she said.

“I think the most frightening thing was the word ‘cancer’, so as soon as I was on board with having cancer, I just thought I’m going to get on with it.”

Massive wave of empathy from all MPs

Mr Cleverly said their family and friends have been “fantastic”, with many shaving their heads in solidarity and for charity.

He said despite politics being “ultra-competitive”, MPs from all parties have been very supportive.

“There was this massive wave of empathy and friendship, even from people I didn’t even know particularly well, that was really touching,” he said.

Mrs Cleverly’s treatment left her incredibly ill, with her toenails falling out, infected hives, her face ballooning and stomach and mouth ulcers.

She has now had a mastectomy but is still having immunotherapy to reduce the risk of recurrence and is on a waiting list for reconstructive surgery.

“I feel great, I feel so much more like me,” she said.

But Mr Cleverly admitted there were a “couple of times” he thought he might lose his wife.

Holding back tears, he said: “I haven’t thought about my mortality, and certainly haven’t ever really given any thought to losing Susie, or what that might feel like – and then suddenly you get to confront that. And, we are close.”

The MP, who was made foreign secretary by Ms Truss in September, said he could not have taken the job if it had been earlier in the year when she was going through chemotherapy.

Mrs Cleverly said: “I would have said, do it. But you could have done so.”

Her husband added: “Had I been asked perhaps six or seven months ago when you went through chemo, I don’t think I would have been able to give it the energy and the focus I think the job deserves.

“She’s always been very, very supportive of me and my career. And I do travel a lot. I think the big thing from this is, I think both of us, maybe me, I’m less blase about the time we do have together.

“So when we are together, we’re very, very conscious of making that time really valuable and really meaningful.”

Talking about his job, Mr Cleverly added that he truly believes Ukrainians will succeed in taking their country back from Vladimir Putin, with the best option now for the Russians to withdraw.

He added that Russia should give all the Ukrainian land it has taken back, including Crimea.

“We will continue to support the Ukrainians until this is done,” he said.

Two children severely injured in attack near German school
Shut him down? If asked, Rodgers ‘open’ to idea
Conspiracy theorist Alex Jones files for bankruptcy
Ninth child to die after contracting Strep A infection named by school
Palace aide resigns after asking charity boss ‘where in Africa are you from’