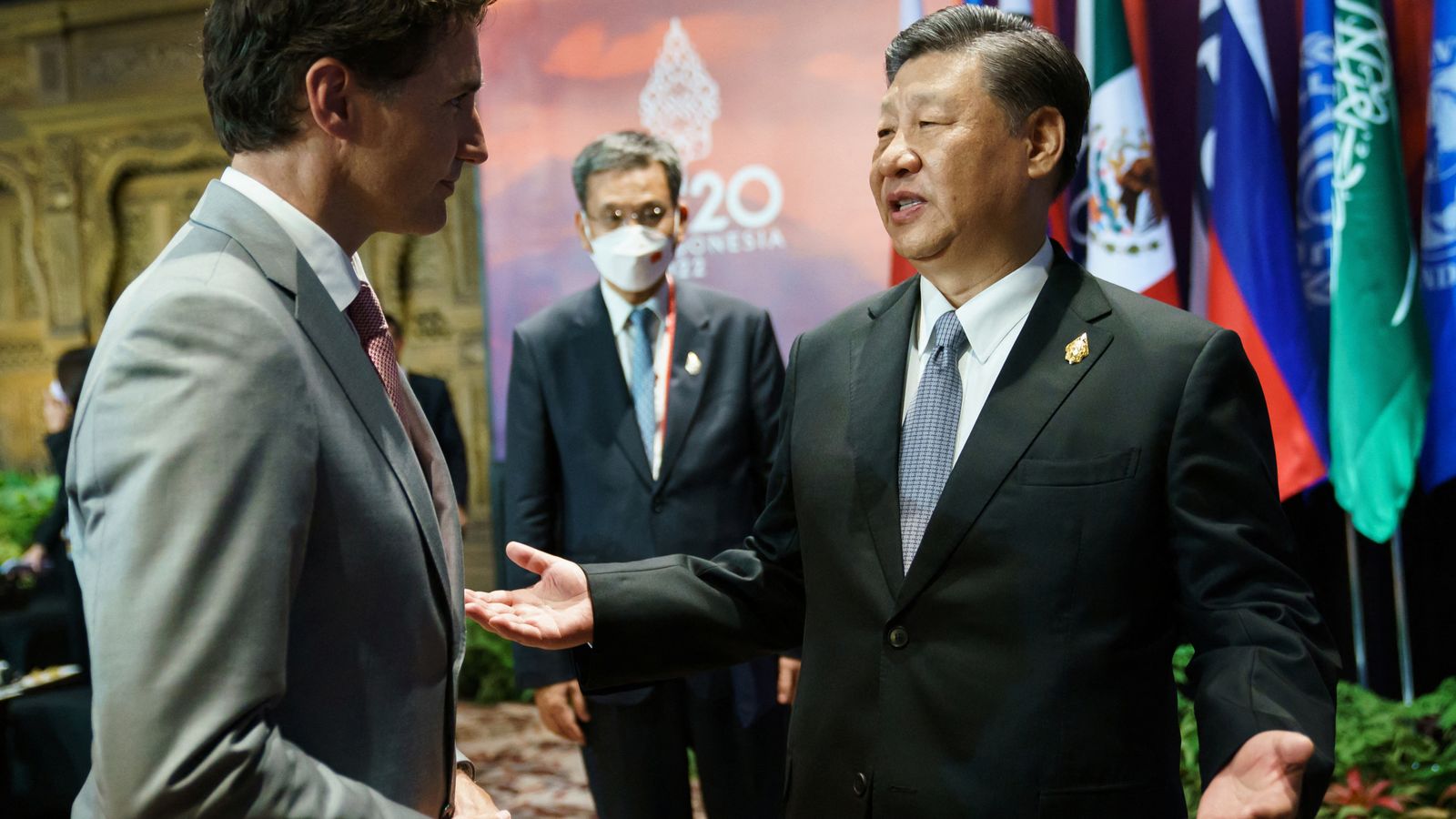 China has said it supports frank exchanges as long as they are held on an equal basis, after its president publicly scolded Justin Trudeau.

The two were seen arguing at the G20 summit in Indonesia after President Xi Jinping expressed his ire at Mr Trudeau for allegedly leaking details of a meeting in which the Canadian prime minister raised concerns about China allegedly interfering in his country’s affairs.

Spokesperson Mao Ning said the current state of relations between Beijing and Ottawa is Canada’s responsibility and that Beijing hopes Canada will take actions that create conditions to improve bilateral ties.

“The video you mentioned was indeed a short conversation both leaders held during the G20 summit,” she said.

“This is very normal. I don’t think it should be interpreted as Chairman Xi criticising or accusing anyone.”

President Xi’s exchange with Mr Trudeau was overheard by a TV camera.

What was said in the pair’s exchange?

“Everything we discussed has been leaked to the paper; that’s not appropriate,” Xi Jinping told Mr Trudeau through an interpreter.

“And that’s not… the way the conversation was conducted, if there is sincerity on your part,” Mr Xi said, at which point Mr Trudeau interrupted.

“In Canada, we believe in free and open and frank dialogue and that is what we will continue to have,” Mr Trudeau said.

“We will continue to look to work constructively together, but there will be things we will disagree on.”

“Let’s create the conditions first,” Mr Xi responded through the interpreter, before the pair shook hands.

As he walks away Mr Xi can be heard saying in Mandarin: “Very naive.”

A rare and fascinating insight into Chinese foreign diplomacy

An interaction like this, played out so publicly, between any two world leaders would be unusual. To see it instigated by the secretive Chinese leader Xi Jinping is incredibly rare.

It’s hard to overstate just how carefully controlled and closely choreographed every public appearance he makes is. Nothing is left to chance and emotions are almost never displayed.

Yet here we have him speaking very candidly and looking, at times, agitated.

The context is that the meeting between the two men the day before was not part of the official schedule and was, instead, a more brief exchange after another event.

There is a chance the Chinese were frustrated they did not have a chance to prepare their own official response.

Under President Xi Chinese foreign diplomacy has become significantly more assertive. Seeing it from the leader himself is a rare and fascinating insight.

The pair first spoke at the G20 last Tuesday.

When he was later asked at a news conference about the confrontation, Mr Trudeau said “not every conversation is always going to be easy, but it’s extremely important that we continue to stand up for the things that are important for Canadians”.

More from G20:
Xi’s meeting with Sunak called off
What China wanted from talks with Biden

Chinese foreign ministry spokesperson Ms Mao said: “Firstly, I want to stress that China never interferes in the affairs of other countries.”

She did not say whether Mr Trudeau bringing up alleged Chinese interference on Tuesday was the reason behind the exchange between the two leaders the following day.

Ms Mao said Mr Xi telling Mr Trudeau “otherwise the outcome will not be easy to tell” was not a threat, because both leaders were engaging in a “normal” exchange and merely “expressing their respective positions”.