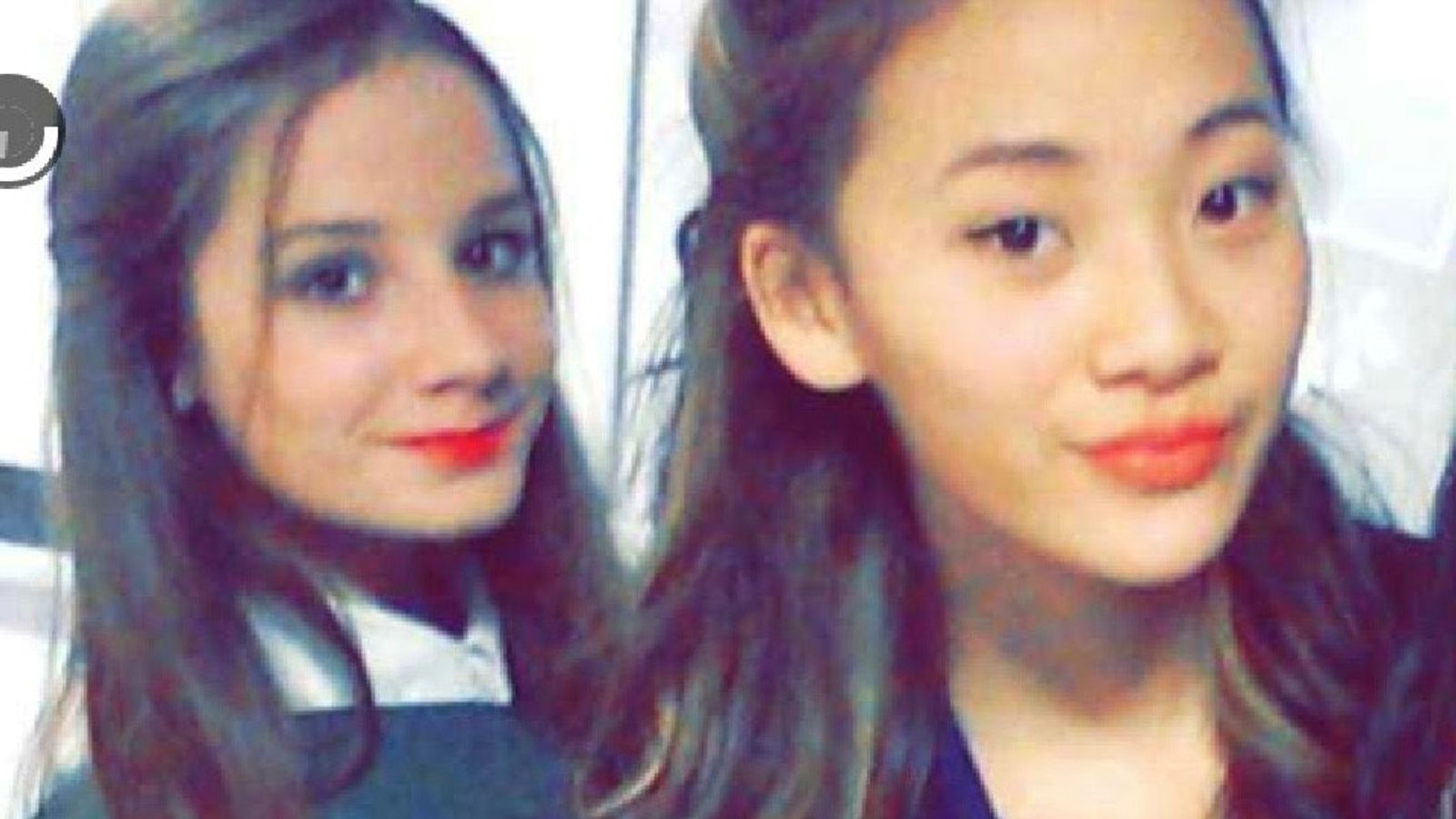 Davine Lee still has the birthday present she bought for her friend Molly five years ago, an unwrapped box containing a hoodie featuring her favourite TV show, that remains sitting untouched at home.

She learned of her friend’s death, at the age of 14, after seeing her empty chair at school and wondering where she might be.

Hearing the news, nothing made sense.

Warning: Some readers may find the content in this story distressing.

Molly Russell, a seemingly happy teenager from Harrow, northwest London, was found dead in her bedroom in November 2017, just a day after rehearsing with Davine for a show she had been picked to play a lead role in.

It later emerged she had viewed masses of content related to suicide, depression and anxiety online.

In a landmark ruling at an inquest in September, a coroner ruled she died not from suicide, but from “an act of self-harm while suffering from depression and the negative effects of online content”.

Dealing with the death of a friend in this way, especially at such a young age, is a particularly complex form of grief to process.

“To have to lose a friend at that age, it’s scarring,” Davine quietly explains. “Losing Molly… it’s something we won’t ever be able to forget or entirely move on from…

“I’ve still got her birthday present from 2017 – it would have been her 15th birthday, and of course she never made it to that birthday. That present still sits in my room, I’m just really not sure what to do with it. I obviously can’t give it to her but it feels in some way like I can still hold on to her through that.”

With permission from the Russell family, this is Davine’s first media interview, speaking exclusively to Sky News.

Now 20 and at university, she says she was moved to speak publicly for the first time to highlight the importance of bringing the Online Safety Bill back before parliament. Reliving that time, she hopes, might prompt anyone struggling to see how much they would be missed.

“It was shocking to see that it was that bad,” says Davine, referring to the graphic material that was shown at Molly’s inquest. “I want people to know that what happened to Molly isn’t an isolated event and the content that she was being pushed, it still exists.”

Molly and Davine had been friends since they started secondary school together and shared a love of singing and musicals. They starred together in school productions of Les Miserables and Beauty And The Beast.

“[Molly] had just been given like one of the lead roles for the show we were doing that year… she was still doing the things she loved… either depression or poor mental health can hide almost in plain sight in that sense,” says Davine.

Davine had no idea that Molly was suffering.

Recalling the horrific day that her school friends were told what had happened, she remembers the teachers ushering them all into a room. Then came the news that Molly had died.

They were all in tears. “And that’s a sound I can’t forget, the sound of that many children just in such emotion.

“To attend a funeral at that age for someone who is a friend… we were just trying to get through each day.”

Molly’s family would later learn that alone in her room, social media algorithms had been feeding her a weight of disturbing content.

The coroner at her inquest ruled the content she had viewed “romanticised” self-harm, “normalised” her depression, and that some content “discouraged” the teenager from seeking “help” – ultimately contributing to her death.

Davine wants to highlight that Molly was not an isolated case, and that young people being drawn into looking at dark content on social media is a huge and damaging issue.

On Instagram, many of the hashtags Molly searched for have now been blocked. However, Sky News’ data and forensics unit found that while these blocks have been made and some content removed, the autofill device or misspellings can still lead users to some content, which Molly viewed; this was shown to her inquest but is too distressing to publish here.

Read more:
The digital trail that sheds light on the final months of Molly Russell’s life
‘No one is immune from such tragedy’
Social media ‘almost impossible to keep track of’

A spokesperson for Meta, which owns Instagram, responded to Sky News to say the company is committed to protecting young people.

“We’ve already been working on many of the recommendations outlined in [the coroner’s] report, including new parental supervision tools that let parents see who their teens follow and limit their time on Instagram,” the spokesperson said.

“We also automatically set teens’ accounts to private when they join, nudge them towards different content if they’ve been scrolling on the same topic for some time and have controls designed to limit the types of content teens see.

“We don’t allow content that promotes suicide or self-harm, and we find 98% of the content we take action on before it’s reported to us. We’ll continue working hard, in collaboration with experts, teens and parents, so we can keep improving.”

Working for one of the world’s leading social media companies for a year during the pandemic, her job was to carry out a secondary viewing of content that had been flagged as potentially problematic, including posts that could be “extremely violent, homophobic”, or even show paedophilia.

“But there was probably one video in particular that affected me the most,” she said. This was footage of someone taking their own life.

She said she would watch and tag at least 1,000 videos a day. “It more just upset you about the world – seeing so much, sorry to say it, s**t, really. Things that people would do to themselves or others, it gives you a lack of belief in the world, really.”

After a year, she says that mentally and physically she could not carry on. “I felt so unwell that I literally couldn’t work, and I had to call my GP to advise me not to do it anymore.

“The effect it had on me the most was the sleep. I couldn’t sleep because I was so stressed. I was dreaming about some of the videos I could have incorrectly tagged.

“I won’t go into personally exactly what happened, but it wasn’t far off from Molly [Russell]. I can recognise feelings in how I felt seeing all of this content coming at me.”

The enormity of the task of policing all the content was just too much, she says. “The system there was just chaos… no one really knew what was happening.”

“We’re just a lot of young [people], like a lot of [people who have] just finished their degree… sat there trying to figure out how to judge all this content with no legal background.”

It found that more than a fifth (22%) of young people are automatically shown distressing content by social media platforms, based on their previous online activity, at least once a week.

Nearly all young people (89%) who have had mental health problems said social media helps drive harmful behaviours, and more than half (52%) of that group said they had sought out content which they knew might make them distressed or uncomfortable.

The government has been accused of dragging its feet when it comes to introducing legislation to regulate social media firms but now, after years of delay, the Online Safety Bill is back before parliament next week – proposing fines for tech companies of up to 10 % of their global turnover if they fail to protect users from harmful content – and criminalising posts that encourage self-harm.

But critics such as Baroness Claire Fox want the bill to be scrapped.

“The danger is that we – on the back of a very emotional response to something like the tragedy of Molly Russell – bring in a piece of legislation that doesn’t just protect children but actually infantilises adults and treats them like children,” she told Sky News. “And if you’re a free speech campaigner, as I am, this bill is a major, serious censorship tool.”

To those campaigning for better protections against potentially dangerous social media algorithms, Molly’s case embodies the horrific consequences of doing nothing.

Olly Parker, from Young Minds, says: “I’m kind of a researcher in this field, but I’m also a father as well and it absolutely terrifies me.

“I don’t think we’re really going to see what the long-term impacts of this are maybe until 10, 15 years down the line. But one thing we are seeing is a real crisis in children in young people’s mental health. So every month right now we see record numbers of young people being referred to their GPs and doctors for more mental health support.”

When the Online Safety Bill returns to parliament, Molly Russell’s friends and family hope it will be the first step towards holding big tech responsible for the content on their platforms.

Read more: Why the Online Safety Bill is proving so controversial
‘Why are you doing this?’ – heated exchange at inquest
Child psychiatrist ‘did not sleep well’ after viewing content

“It’s big news that they now want to criminalise harmful content and anyone responsible for that but at the same time it does feel like it’s been an awfully long journey,” says Davine. “But I think it’s good to appreciate that we’re here now.”

But while it is something to place hope in, it can never bring back Molly.

“She was so loved by all of us,” Davine says. “I think she genuinely believed we would be better off without her… I think if she saw how much pain we were going through, I don’t think she would have made that choice.”

Anyone feeling emotionally distressed or suicidal can call Samaritans for help on 116 123 or email jo@samaritans.org. Alternatively, letters can be mailed to: Freepost SAMARITANS LETTERS