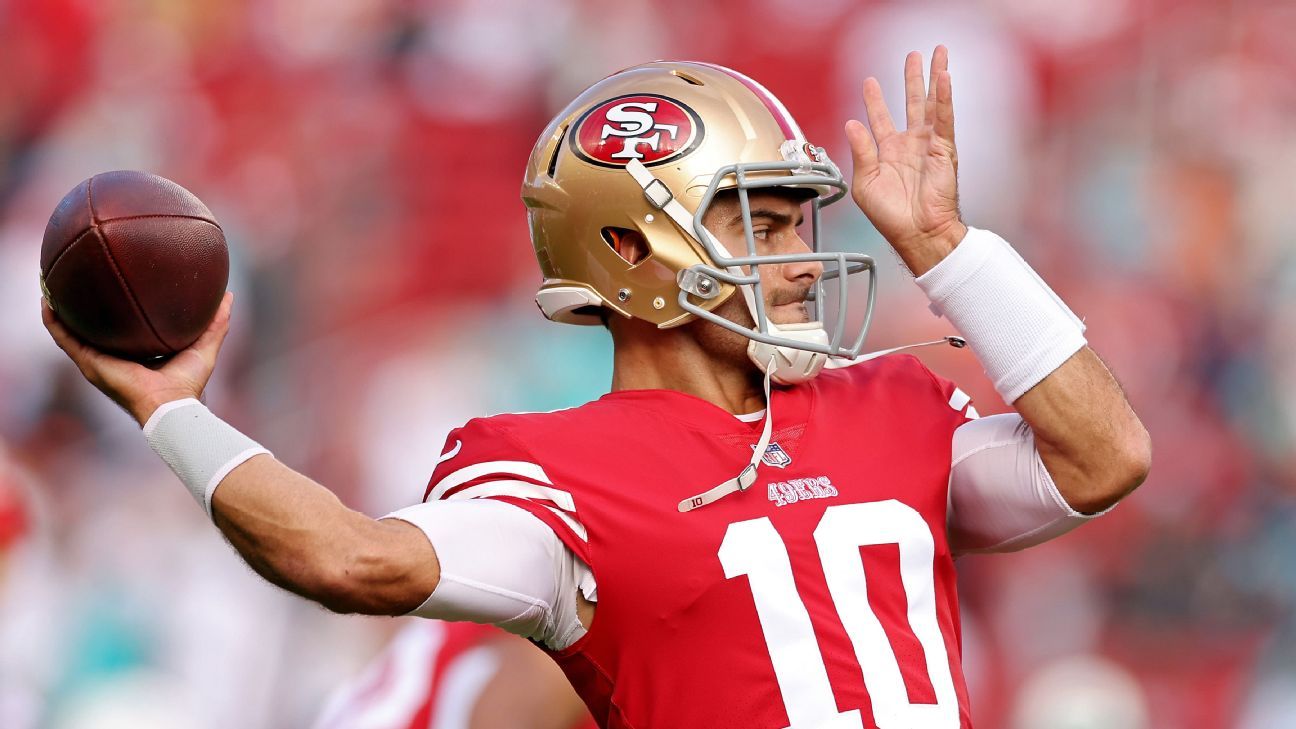 SANTA CLARA, Calif. — San Francisco 49ers coach Kyle Shanahan confirmed Wednesday that quarterback Jimmy Garoppolo will not need surgery on his broken left foot and will have a much shorter rehabilitation than was feared after Garoppolo suffered the injury on Sunday.

But Shanahan stopped short of suggesting Garoppolo’s return is a sure thing even if the Niners advance deep into the postseason. Shanahan acknowledged that Garoppolo is on a seven- or eight-week recovery timeline but noted that is how long it’s expected to take Garoppolo to heal, not necessarily to be ready to play football.

“It will be a big recovery but much less than what we anticipated, which is awesome news for him in the offseason,” Shanahan said. “He’ll be good to go right away, so it won’t be like last year. There’s a way outside chance late in the playoffs or something like that, but it’s just an outside chance. We’re not real optimistic about that, but they didn’t rule it out.”

Shanahan said he has not been told how long it would take for Garoppolo to return to football activities but suggested it would take “a little bit more” than the seven or eight weeks assuming Garoppolo heals properly in that time.

The NFC divisional round is in seven weeks and the NFC Championship Game is eight weeks away, which means the Super Bowl would be the most realistic possibility. That game is 10 weeks away.

In the meantime, the Niners are going to take their time before making any decisions on what to do with Garoppolo from a roster standpoint. They have already used six of their eight injured reserve returns this year and have the remaining two spots earmarked for defensive tackle Javon Kinlaw and running back Elijah Mitchell, though they don’t have to declare anything until those players are ready to begin practicing again.

Which means Garoppolo won’t land on injured reserve, at least not right away. He can remain on the 53-man roster and be a weekly inactive until the Niners might need the roster spot for someone else.

“We have got to play that by ear with our whole roster,” Shanahan said. “Our goal is to get to the playoffs, so we’ve got to make sure we do the best thing possible for that. That’s the issue with IR. Most likely, if that did happen, he wouldn’t be able to come back for that, so we’ll see how these IR decisions play out over the next couple of weeks.”

Shanahan added that Garoppolo did not suffer any ligament damage, which was critical in giving him a shorter timeline to recover. If nothing else, Garoppolo should be healthy for the offseason program and enter free agency with a clean bill of health, something that did not happen last year when he had shoulder surgery and the Niners were unable to trade him.

“I know it’s a serious injury that’s most likely to keep him out for the year and I know it was really good news that there was no ligament damage or anything,” Shanahan said. “He’ll be fine once the broken foot heals.”

Shanahan also confirmed that the Niners did not put in a waiver claim on quarterback Baker Mayfield, adding that he “feels good” about the Niners’ quarterback situation with rookie Brock Purdy and veteran Josh Johnson as the top two on the depth chart. The Los Angeles Rams claimed Mayfield on waivers on Tuesday.

This week’s opponent, the Tampa Bay Buccaneers, brought up another 49ers quarterback discussion of the recent past. Tom Brady, who grew up in nearby San Mateo, California, was a free agent after the 2019 season and had interest in finishing his career with his childhood favorite team.

After that season, Shanahan and staff studied Brady and considered whether to pursue him but opted to stick with Garoppolo, who had just been the starter on a team that fell just short in Super Bowl LIV.

Brady was coming off one of his worst seasons but left the New England Patriots for Tampa Bay and went on to win another Super Bowl. Brady is fifth in the NFL in passing yards with a 16-3 touchdown-to-interception ratio as he and the Bucs come to Levi’s Stadium on Sunday.

“I’d like to say of course not but I think everyone since then you’re wondering, ‘When is the number [age] too high?'” Shanahan said. “But now when you watch him that first week in Tampa, you’re wondering, ‘What the hell was anyone ever thinking?’ The dude looks the exact same he did that year, and he does when he comes off injury. I think he’s playing as good now and throwing the ball as well now as I’ve seen anybody ever do it.”