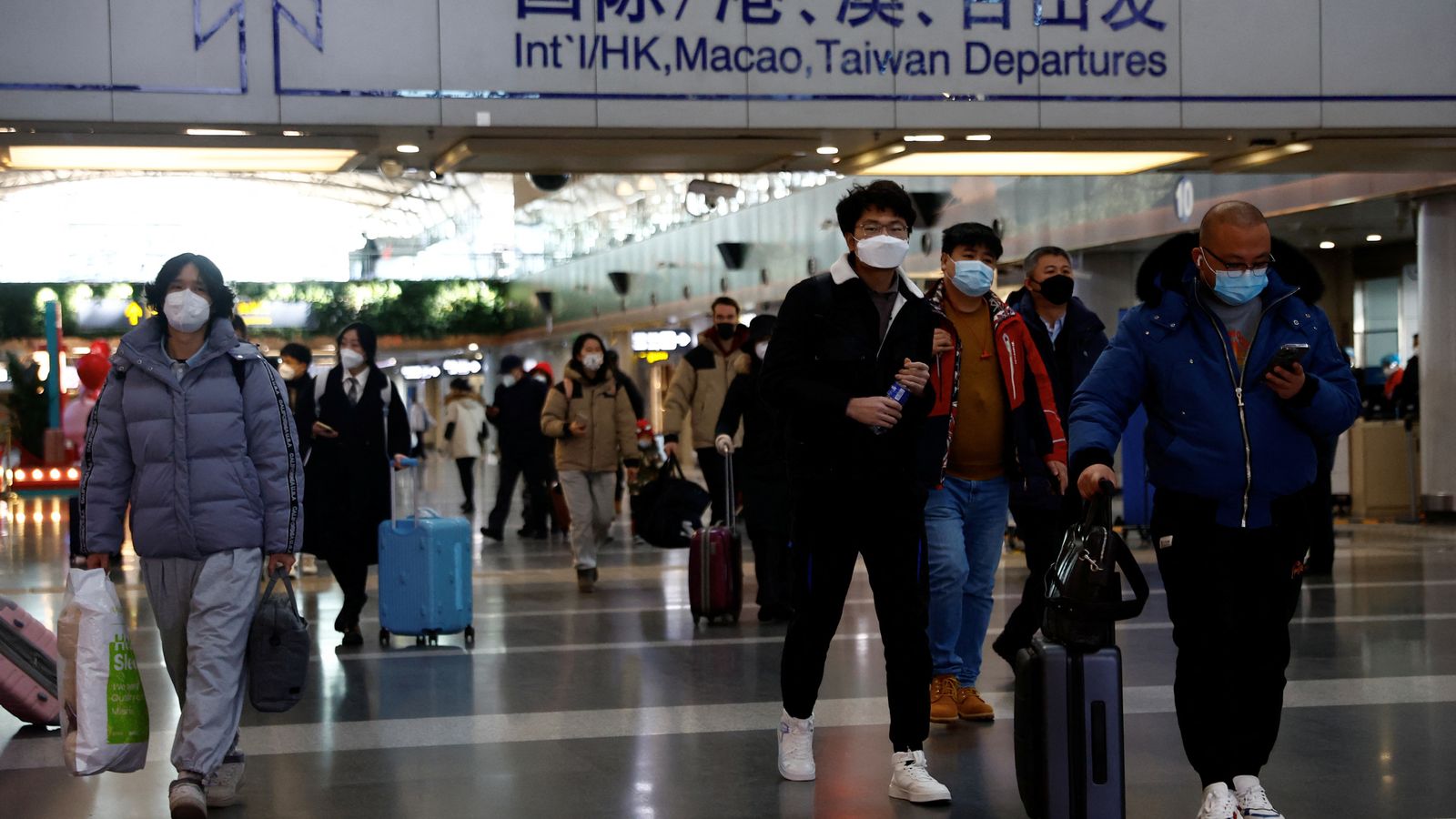 Travellers arriving in England from mainland China will have to provide a negative pre-departure COVID test, the government has said.

A growing list of countries, including the US, have announced similar rules in recent days.

The Department of Health and Social Care said the “precautionary and temporary” change would take effect from 5 January.

The negative test must have been done no more than two days before departure.

A sample of arrivals will also be tested to check for any potential new variants.

The government said it was working with the administrations in Wales, Scotland and Northern Ireland to get the same rules in place across the UK as soon as possible.

There has been a surge in infections in China after it rowed back some of its notoriously tough coronavirus rules, such as regular PCR testing.

With its border controls also being eased next week, there are worries it could lead to an increase in global cases.

Officials estimated 250 million people are likely to have contracted the virus in the first 20 days of December, according to leaked notes.

The true number of infections may be significantly higher as asymptomatic cases are no longer recorded.

Spain, Italy, Japan, South Korea, the US and India are among countries that have recently introduced new rules on arrivals from China.

On Friday, France’s transport minister said it would also bring in changes from 1 January.

Negative tests will be needed before flying from China, masks must be worn on the plane and tests will be carried out on arrival in France.

US: Starting on 5 January, the US will bring in mandatory COVID-19 tests on travellers from China. All plane passengers aged two and above will have to have a negative result no more than two days before leaving from the mainland, Hong Kong or Macau. The US Centers for
Disease Control and Prevention said Americans should also reconsider travel to those places.

JAPAN: The country will require a negative COVID-19 test upon arrival for travellers from mainland China. Those who test positive will be required to quarantine for seven days. New border measures for China will come into effect at midnight on 30 December. The government will also limit requests from airlines to increase flights to China.

INDIA: From 1 January, people travelling to India from China, Hong Kong, Japan, South Korea, Singapore and Thailand must have a negative COVID before their departure and upload it on an Indian government website.

ITALY: The nation has ordered COVID-19 antigen swabs and virus sequencing for all travellers coming from China. Milan’s main airport, Malpensa, has started testing passengers arriving from Beijing and Shanghai.

TAIWAN: Beginning on 1 January, all passengers on direct flights from China, as well as by boat at two offshore islands, will have to take PCR tests upon arrival.

SOUTH KOREA: The nation will require travellers from China to provide a negative COVID test result before departure.

SPAIN: People travelling from China to Spain will be required to test negative for COVID or prove they have been fully vaccinated against the disease.

MALAYSIA: The country will screen body temperatures of all inbound travellers, including those from China, and those detected with fever or other symptoms will be tested for COVID. It will also sample wastewater from aircraft arriving from China for coronavirus and will conduct tests to detect the entry of any new variants.

FRANCE: Negative tests will be needed before flying from China from 1 January, masks must be worn on the plane and tests will also be carried out on arrival in France.

AUSTRALIA: Prime Minister Anthony Albanese said Australia was continuing to monitor the situation in respect of China “as we continue to monitor the impact of COVID here in Australia as well as around the world”.

PHILIPPINES: The country is being “very cautious” and could impose measures such as testing requirements on visitors from China, but not an outright ban, transportation secretary Jaime Bautista said.

The European Union’s health agency has said the introduction of mandatory COVID screenings of travellers from China is “unjustified”.

Reacting to the UK government announcement, Tory MP Craig Mackinlay said he was “opposed to new, creeping moves towards restrictions & lockdowns” but “preventing entry to positive cases is a sensible move”.

Read more:
Is UK risking new variants without action on Chinese travellers?
Zero-COVID U-turn means infection rate will be shrouded in secrecy
Half of passengers on China flight to Italy have COVID

China has rejected criticism of its COVID data and said it expects future mutations to be potentially more transmissible but less severe.

The country’s own requirement for international travellers to quarantine is ending on 8 January. It’s thought to no longer be effective given the high number of infections now circulating within the country.

However, incoming travellers will still need to show a negative test before departure.

China’s loosening of the rules followed a rare wave of protests that appeared to surprise its leaders.

There are fears the increase in cases could lead to many deaths in China because of the relatively low percentage of elderly and vulnerable people who are fully vaccinated.