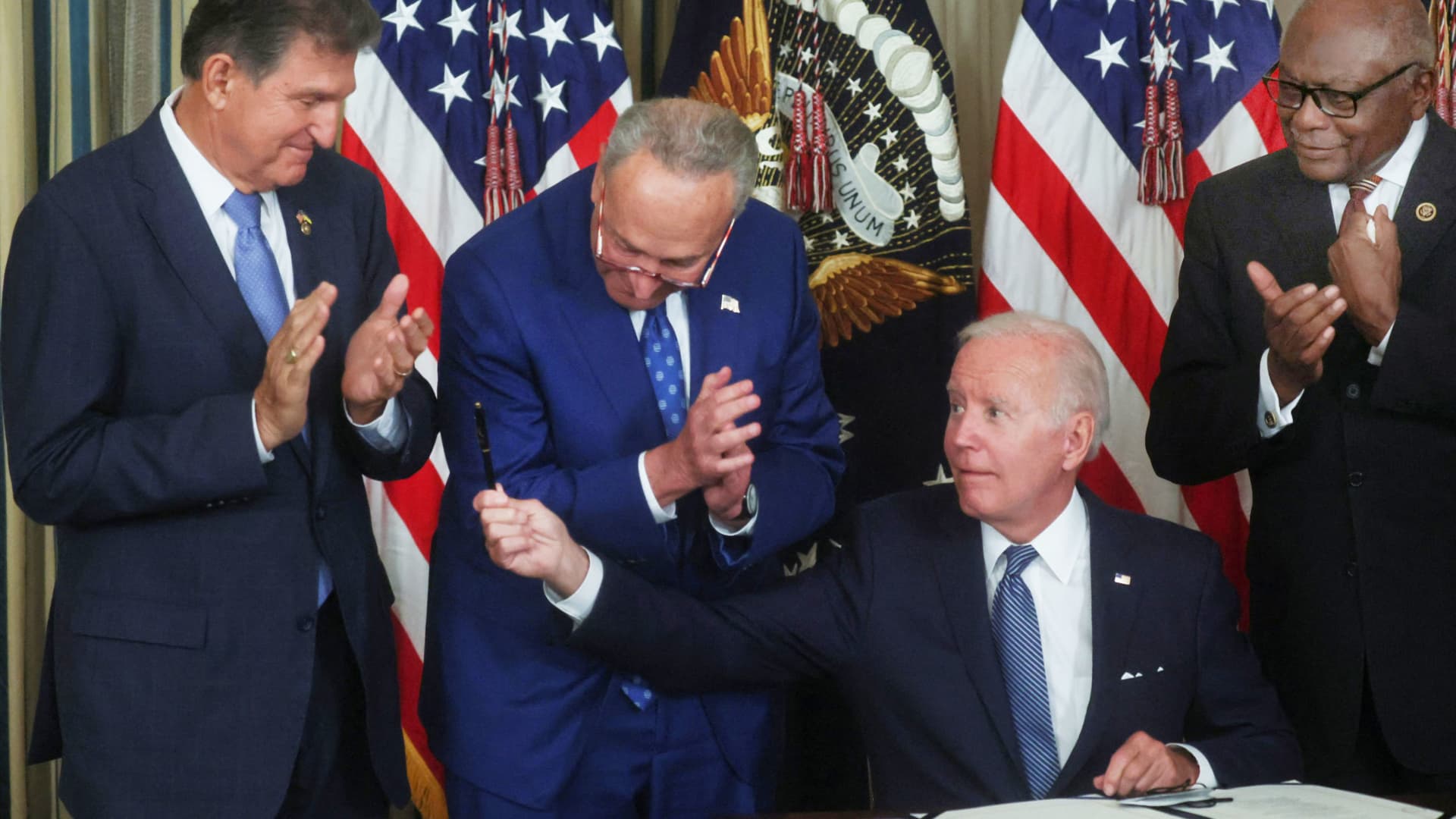 The Biden administration this year signed a historic climate and tax deal that will funnel billions of dollars into programs designed to speed the country’s clean energy transition and battle climate change.

As the U.S. this year grappled with climate-related disasters from Hurricane Ian in Florida to the Mosquito Fire in California, the Inflation Reduction Act, which contains $369 billion in climate provisions, was a monumental development to mitigate the effects of climate change across the country.

The bill, which President Joe Biden signed into law in August, is the most aggressive climate investment ever taken by Congress and is expected to slash the country’s planet-warming carbon emissions by about 40% this decade and move the country toward a net-zero economy by 2050.

The IRA’s provisions have major implications for clean energy and manufacturing businesses, climate startups and consumers in the coming years. As 2022 comes to a close, here’s a look back at the key elements in the legislation that climate and clean energy advocates will be monitoring in 2023.

Despite a rise in EV sales in recent years, the transportation sector is still the country’s largest source of greenhouse gas emissions, with the lack of convenient charging stations being one of the barriers to expansion. The Biden administration has set a goal of 50% electric vehicle sales by 2030.

The IRA limits EV tax credits to vehicles assembled in North America and is intended to wean the U.S. off battery materials from China, which accounts for 70% of the global supply of battery cells for the vehicles. An additional $1 billion in the deal will provide funding for zero-emissions school buses, heavy-duty trucks and public transit buses.

Stephanie Searle, a program director at the nonprofit International Council on Clean Transportation, said the combination of the IRA tax credits and state policies will bolster EV sales. The agency projects that roughly 50% or more of passenger cars, SUVs and pickups sold in 2030 will be electric. For electric trucks and buses, the number will be 40% or higher, the group said.

In the upcoming year, Searle said the agency is monitoring the Environmental Protection Agency’s plans to propose new greenhouse gas emissions standards for heavy-duty vehicles starting in the 2027 model year.

“With the IRA already promoting electric vehicles, EPA can and should be bold in setting ambitious standards for cars and trucks,” Searle said. “This is one of the Biden administration’s last chances for strong climate action within this term and they should make good use of it.”

It’s the first time the federal government has imposed a fee on the emission of any greenhouse gas. Global methane emissions are the second-biggest contributor to climate change after carbon dioxide and come primarily from oil and gas extraction, landfills and wastewater and livestock farming.

Methane is a key component of natural gas and is 84 times more potent than carbon dioxide, but doesn’t last as long in the atmosphere. Scientists have contended that limiting methane is needed to avoid the worst consequences of climate change.

The Harris Cattle Ranch feedlot, located along Interstate 5, is the largest producer of beef in California and can produce 150 million pounds of beef a year as viewed on May 31, 2021, near Harris Ranch, California.
George Rose | Getty Images

Robert Kleinberg, a researcher at Columbia University’s Center on Global Energy Policy, said the methane emitted by the oil and gas industry each year would be worth about $2 billion if it was instead used to generate electricity or heat homes.

“Reducing methane emissions is the fastest way to moderate climate change. Congress recognized this in passing the IRA,” Kleinberg said. “The methane fee is a draconian tax on methane emitted by the oil and gas industry in 2024 and beyond.”

In addition to the IRA provision on methane, the Biden Interior Department this year proposed rules to curb methane leaks from drilling, which it said will generate $39.8 million a year in royalties for the U.S. and prevent billions of cubic feet of gas from being wasted through venting, flaring and leaks.

There’s also $27 billion going toward a green bank called the Greenhouse Gas Reduction Fund, which will provide funding to deploy clean energy across the country, but particularly in overburdened communities. And the bill has a hydrogen production tax credit, which provides hydrogen producers with a credit based on the climate attributes of their production methods.

Solar panels are set up in the solar farm at the University of California, Merced, in Merced, California, August 17, 2022.
Nathan Frandino | Reuters

Emily Kent, the U.S. director of zero-carbon fuels at the Clean Air Task Force, a global climate nonprofit, said the bill’s support for low-emissions hydrogen is particularly notable since it could address sectors like heavy transportation and heavy industry, which are hard to decarbonize.

“U.S. climate policy has taken a major step forward on zero-carbon fuels in the U.S. and globally this year,” Kent said. “We look forward to seeing the impacts of these policies realized as the hydrogen tax credit, along with the hydrogen hubs program, accelerate progress toward creating a global market for zero-carbon fuels.”

“Everybody wants to be part of this,” Roberts told CNBC following the passage of the bill in August. Even before the measure passed, “there was already a big groundswell around climate,” he said.

Investing in communities burdened by pollution

The legislation invests more than $60 billion to address the unequal effects of pollution and climate change on low-income communities and communities of color. The funding includes grants for zero-emissions technology and vehicles, and will help clean up Superfund sites, improve air quality monitoring capacity, and provide money to community-led initiatives through Environmental and Climate Justice block grants.

Research published in the journal Environmental Science and Technology Letters found that communities of color are systematically exposed to higher levels of air pollution than white communities due to redlining, a federal housing discrimination practice. Black Americans are also 75% more likely than white Americans to live near hazardous waste facilities and are three times more likely to die from exposure to pollutants, according to the Clean Air Task Force.

Biden signed an executive order after taking office aimed to prioritize environmental justice and help mitigate pollution in marginalized communities. The administration established the Justice40 Initiative to deliver 40% of the benefits from federal investments in climate change and clean energy to disadvantaged communities.

More recently, the EPA in September launched an office focused on supporting and delivering grant money from the IRA to these communities.

The deal includes $20 billion for programs to slash emissions from the agriculture sector, which accounts for more than 10% of U.S. emissions, according to EPA estimates.

The president has pledged to reduce emissions from the agriculture industry in half by 2030. The IRA funds grants for agricultural conservation practices that directly improve soil carbon, as well as projects that help protect forests prone to wildfires.

Separately, this year the U.S. Department of Agriculture announced it will spend $1 billion on projects for farmers, ranchers and forest landowners to use practices that curb emissions or capture and store carbon. That program is focusing on projects for conservation practices including no-till, cover crops and rotational grazing.

Research suggests that removing carbon already in the atmosphere and replenishing soil worldwide could result in a 10% carbon drawdown.

‘He didn’t just break the law he broke my heart’: Navy veteran on George Santos
Columnist points out revealing moment at Trump’s event
China denies US spy balloon claims and insists it always ‘abides by international law’
Madison Square Garden uses face recognition to keep out lawyers
Avis has new T&Cs for renting its EVs, and they’re a little weird