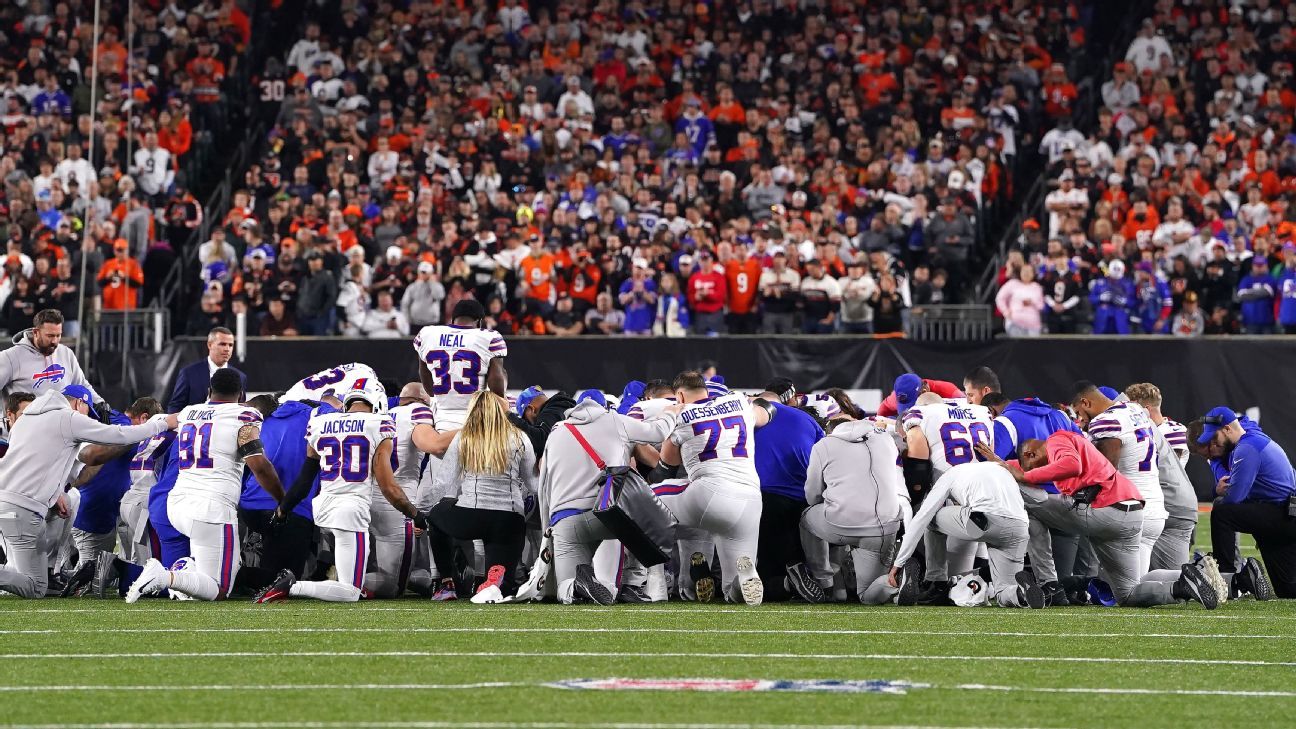 CINCINNATI — Buffalo safety Damar Hamlin had his heartbeat restored on the field after suffering cardiac arrest during the team’s game Monday night against the Bengals, and he is currently in critical condition at a Cincinnati hospital, the Bills said in a statement early Tuesday morning.

The chilling scene midway through the opening quarter of the Monday night showdown between the two NFL powers led the league to postpone the game about 90 minutes after kickoff.

According to the Bills, he is currently sedated and listed in critical condition. The University of Cincinnati Medical Center did not anticipate making any statement early Tuesday morning. 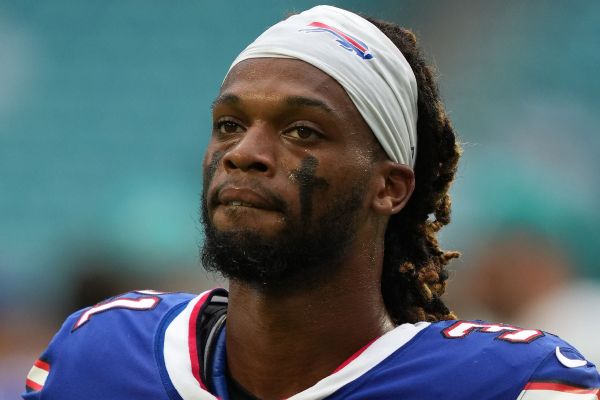 • Chose Pitt over Ohio State and Penn State coming out of high school in western Pennsylvania
• Was a second-team All-ACC selection in final season at Pitt, leading team with 67 tackles
• Taken with the No. 212 overall pick, in the sixth round, of the 2021 draft by the Bills
• Appeared in 14 games as a rookie, making two tackles
• Has appeared in 15 games this season, including 13 starts in place of injured Micah Hyde. Tied for second on Bills in tackles (91), with one forced fumble and 1.5 sacks

The majority of the Bills team remained at Paycor Stadium well into Monday night. The team, including all players outside of Hamlin, then departed shortly after midnight and returned to Buffalo.

“Our thoughts are with Damar and the Buffalo Bills. We will provide more information as it becomes available,” the league said in a statement just after 10 p.m. ET. “The NFL has been in constant communication with the NFL Players Association which is in agreement with postponing the game.”

In a conference call shortly after midnight, the NFL did not provide an update on potentially rescheduling the game as the league enters the final week of its regular season.

The injury took place after Hamlin tackled Higgins following the star Bengals wideout’s reception over the middle near midfield. Higgins led with his right shoulder and hit Hamlin in the chest. Hamlin quickly got up afterward, was on his feet for about three seconds and then abruptly collapsed. Athletic trainers came out to help immediately, and a stretcher then was brought to the field as the trainers protected his head.

The entire Bills sideline surrounded Hamlin as he received care. Multiple Bills players were visibly distressed and comforting one another as he was being cared for by athletic trainers. Many players turned away from watching Hamlin in distress.

The first attempt to move Hamlin resulted in him being brought back down onto the field, but he was ultimately placed into an ambulance, which left the stadium at about 9:25 p.m. ET and headed to the University of Cincinnati Medical Center. Hamlin’s family came down from the stands to be with him in the ambulance.

After Hamlin exited the field, Bills players knelt together in a circle and then returned to the sideline, with the defense heading back on the field to resume play. Buffalo wide receiver Stefon Diggs called everyone over for a word. However, instead of resuming play, Bengals coach Zac Taylor walked over to Bills counterpart Sean McDermott and met with the game officials present. The decision was then made to temporarily pause the game, which the Bengals were leading 7-3, before the league ultimately chose to postpone it.

“What was most important was that it wasn’t about proceeding with the game,” NFL executive vice president of football operations Troy Vincent said during the conference call. “Frankly, that aspect never crossed my mind or their mind internally. We asked that [referee] Shawn [Smith] communicate with both Taylor and Coach McDermott getting the players together. Frankly, it was just about getting a pulse of where they were at that particular time.”

Vincent said that there was not a discussion between him and commissioner Roger Goodell about a five-minute period for players to get warmed up and that resuming play did not cross their minds.

“The NFLPA and everyone in our community is praying for Damar Hamlin,” the union said in a statement. “We have been in touch with Bills and Bengals players, and with the NFL. The only thing that matters at this moment is Damar’s health and well being.”

Diggs and Taylor were among those who went to the hospital later Monday night, while some fans gathered outside it, as well. Meanwhile, reaction came from across the sports world on social media, with star Bills quarterback Josh Allen among those asking for prayers and Higgins sending his own to Hamlin and his family.

Please pray for our brother.

My prayers and thoughts go out to @HamlinIsland the Hamlin Family. I’m praying that you pull through bro. Love 🙏🏾💙

“Emotions you can imagine in both locker rooms, and I commend both of those coaches,” Vincent said. “Tough situation to go back in and look at 53 men in the locker room and not that they asked but just to try and calm people down. It was obvious on the phone with them that the emotions were extremely high. It was a very volatile situation, and I thought the coaches, they led tonight. They led their locker rooms.”

Hamlin was selected in the sixth round of the 2021 NFL draft out of Pittsburgh, with the Bills taking him with the No. 212 overall pick.

He has been starting for the Bills this season in place of injured safety Micah Hyde, who suffered a neck injury in Week 2 and has been on injured reserve ever since. Hamlin entered Monday tied for the second-most tackles on the team (91), and he has one forced fumble and 1.5 sacks this year, making 13 starts.

Bills defensive coordinator Leslie Frazier recently indicated that Hamlin has developed over the course of the season, including noting in the past couple of weeks that he has stepped up more as a vocal leader and improved as a tackler, with a lot thrown on his plate quickly after he had to step in for Hyde.

In that same Week 2 game against the Tennessee Titans in which Hyde was hurt, Hamlin’s close friend and former college teammate, Bills cornerback Dane Jackson, was taken off the field with a neck injury. Jackson missed one game.

Hamlin has a foundation, Chasing M’s, that has been raising money for a toy drive. His stated goal was $2,500, but by early Tuesday morning, donations had surged to more than $3 million.

One of the nation’s top cornerbacks in the class of 2016 out of McKees Rocks, Pennsylvania, Hamlin chose to play for Pitt over Ohio State and Penn State. He delivered, becoming a three-year starter and one of the most reliable players on a defense that required much from him at the safety position.

In his final season at Pitt in 2020, Hamlin was a second-team All-ACC selection, leading the Panthers with 67 tackles and seven pass breakups. After Hamlin was drafted, Pitt coach Pat Narduzzi told WGRZ-TV: “He’s got that heart. He’s got the leadership. I mean, our entire defense revolved around him. Damar will go up there, show his skills off. I think he’s so versatile.”

ESPN’s Coley Harvey and Ben Baby contributed to this report.

UK and US rule out sending F-16 jets to Ukraine – as No 10 says it would be impractical
Oil giant Shell posts highest-ever annual profit of $40 billion
Ukraine War: What difference will western tanks make?
How the Supreme Court could soon change free speech on the internet
‘Her children need her home’: Family of missing dog walker ‘stuck in a nightmare’ since she disappeared