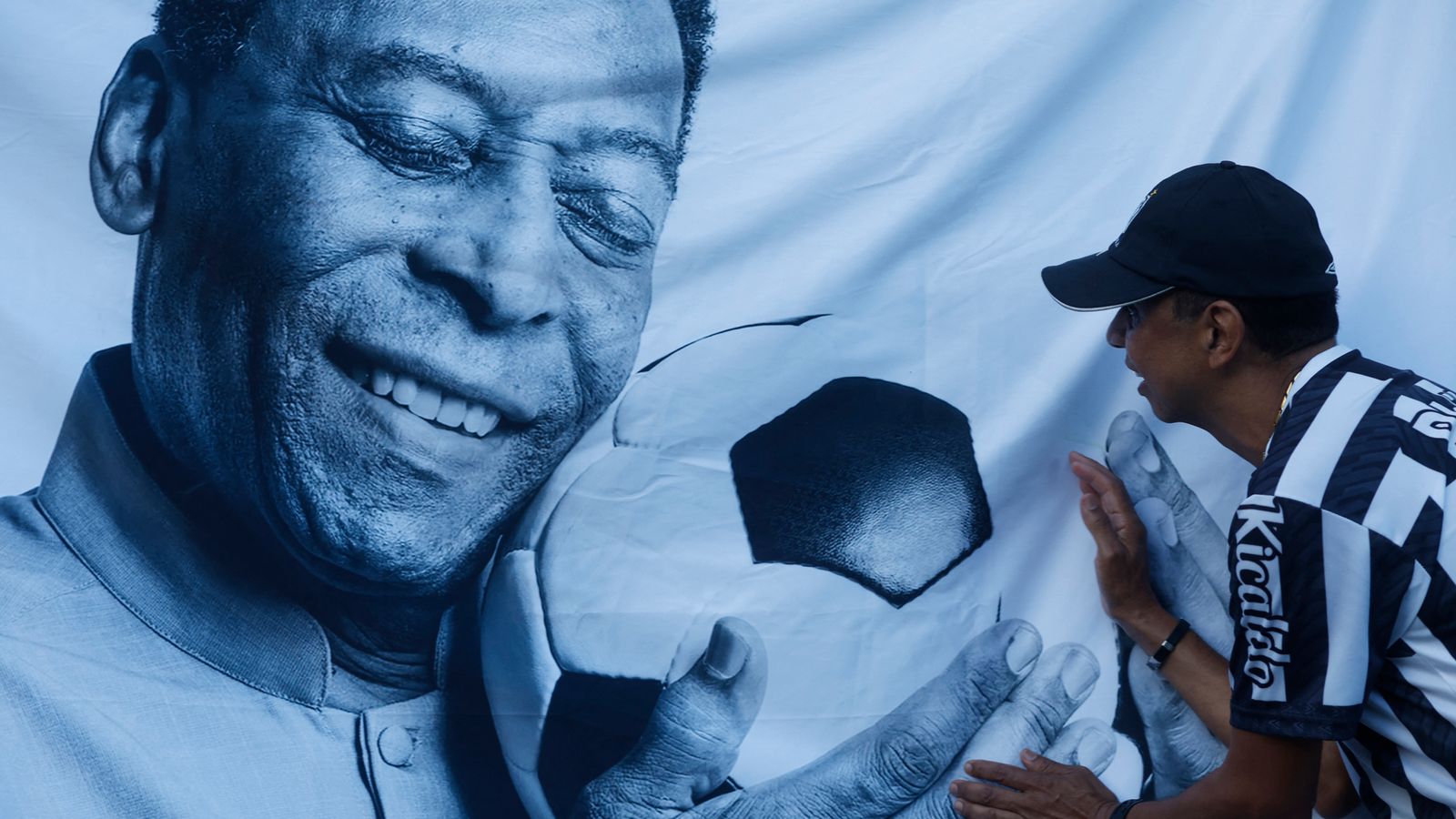 But for 19 seasons, Pelé put this place on the map – so much so, the Brazilian government made him an official national treasure, so he couldn’t play anywhere else.

The return of a king to his beloved Santos was welcomed with flags, flares and fans singing his name even before the sun rose on a blisteringly hot day in the city.

Football icon Pelé, the only player ever to win three World Cups, died on 29 December at the age of 82. A Catholic mass will be celebrated in Santos this morning before his burial at a nearby cemetery.

Transported to the pitch that made Pelé a superstar, his home ground at Vila Belmiro had banners adorning the hoardings proclaiming “Viva O Rei” (long live the king) and shirts with his iconic number 10 hanging over every seat in one stand.

Placing him on the centre circle one last time was a little less smooth than fans might have been used to seeing in life, as the pallbearers had to move immaculately positioned chairs out of the way to make room to lift the open casket onto a plinth.

Those closest to him said their goodbyes, and his son Edinho said a prayer as they gathered together.

As the dignitaries started to arrive, they were led by the FIFA president Gianni Infantino.

Speaking to reporters outside, he said: “We are going to ask every country in the world to name one of their football stadiums after Pelé, because a hundred years from now when children are asking who Pelé was, well, they need to remember him all over the world in a place where you score goals, where you feel emotion in a stadium, in a football field where children, boys and girls can play.

“And we need to make sure that this happens.”

The first fans to file past his coffin queued for hours overnight, desperate not to miss their chance as the doors opened at 10am to reflect on an incredible life.

Saulo, from rural Sao Paulo, lost his phone but wasn’t going to let that dampen his spirit.

He told Sky News it was worth it: “When I saw him lying there, I wished it wasn’t him, but that is the reality we are faced with today.

“There’s no question that man is Pelé the King. He will live forever in our hearts and memories.”

Read more:
Pele embodied the idea of football as the beautiful game
In pictures: The greatest footballer ever 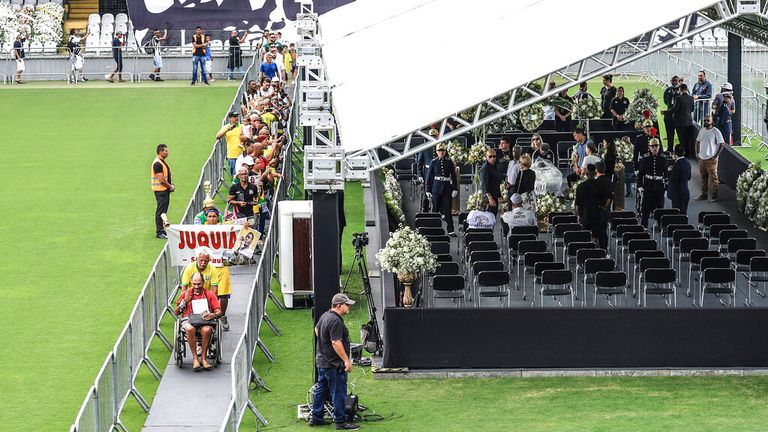 Thousands had the same idea to make the pilgrimage, dressed in the iconic colours of Brazil or the black and white of Santos, and coming from all over the world.

One man who lives in New York, but who grew up in St Lucia told us: “Growing up when I played soccer, Pelé was one of the first black people to be recognised as one of the greatest – and everybody on the island wanted to be Pelé.”

We stopped an Englishman who was on holiday, who said: “It’s a terrible day for Brazil. I have grown up with football. I love football and I had to come here and share the sense of pride with everyone.”

After the sun had set, we went along the same route that so many who idolised him came to tread and saw the huge floral wreaths sent by everyone from Brazilian footballing royalty to state political parties and local philanthropists.

We saw his loved ones still grieving next to his casket, flanked by the Brazilian honour guard. And we saw the great man himself, draped in a Brazilian flag and with an expression of stillness – a world away from his mischievous grin that had so often been seen across the globe.

As the night set in, the queue still snaked around neighbouring streets and the festival mood showed no signs of stopping. People arrived with dogs, with family members and with friends of all ages.

The new President of Brazil, Luiz Inacio Lula da Silva, will arrive this morning before Pelé’s coffin is paraded through the streets of Santos, 24 hours after he arrived.

His coffin will also take in the home of his 100-year-old mother.

Pelé’s final resting place will be a “vertical cemetery” – a high-rise block just 200 metres away from the stadium, close enough to still hear the crowd roar.