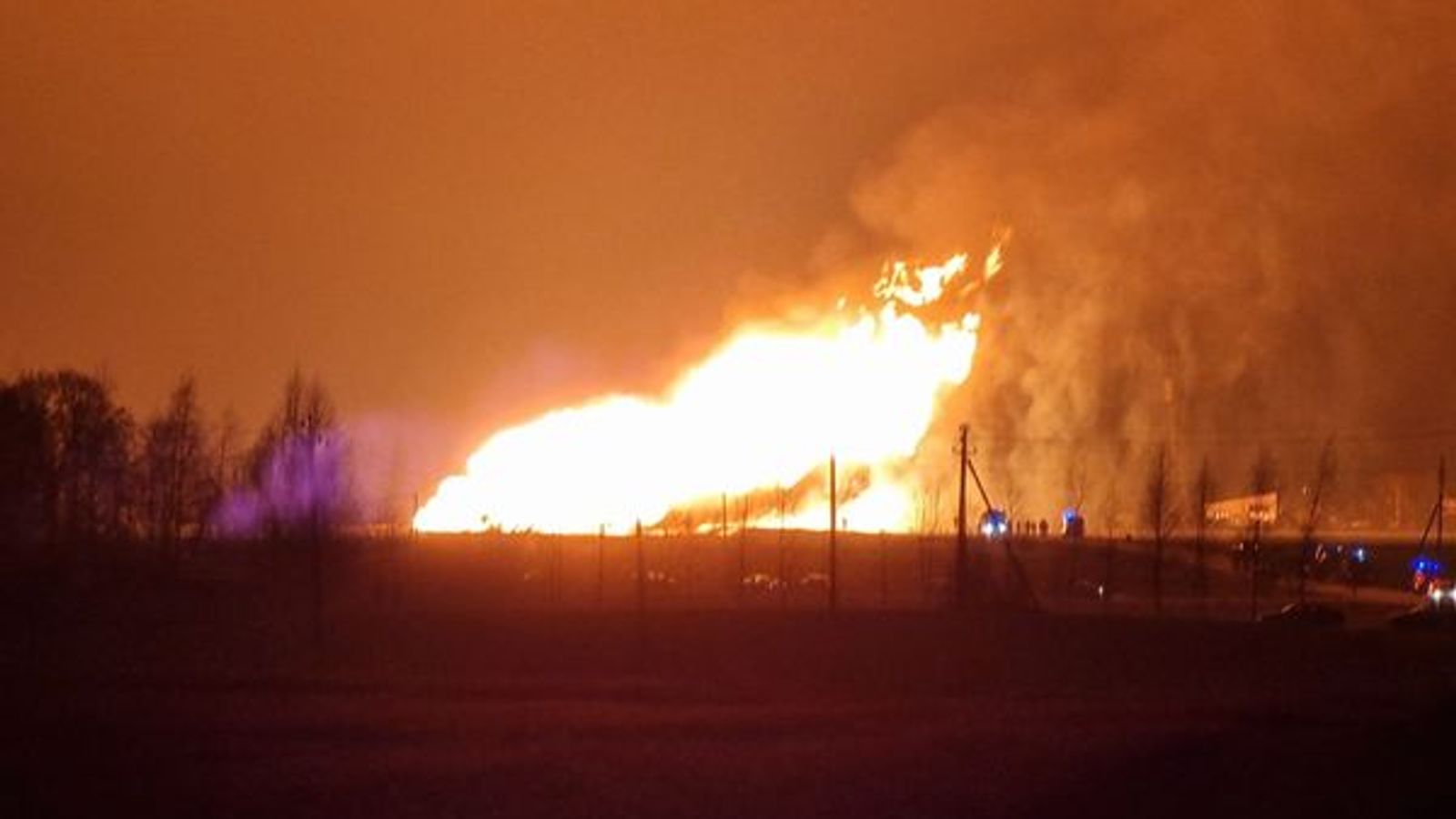 An explosion has hit a gas pipeline connecting Lithuania and Latvia.

Lithuanian broadcaster LRT said the village of Valakeliai, with about 250 inhabitants, was being evacuated as a precaution.

Nemunas Biknius, general director of Amber Grid, told Sky News that no one was injured and no properties were damaged in the explosion, and an investigation will be launched into the cause.

He said: “Luckily no people were injured during this incident and we will start an investigation soon about what has happened.

“At the moment we do not have any evidence that it could have been deliberate, but the investigation will answer the questions.”

Latvia’s energy minister Raimonds Cudars was informed that the explosion was caused by a technical accident, according to the Baltic News Service.

Blazes have now been put out, after firefighters had to wait to tackle the flames.

Gas supply has been restored to Latvia after being temporarily suspended, according to the CEO of the Lithuanian pipeline grid operator.

Mayor of Pasvalys district, Gintautas Geguzinskas, told LRT: “We don’t have any information on the cause of the explosion.

“I spoke to a few people near the scene. They told me that earlier today they saw some work being done near the pipeline where the explosion happened. I can’t confirm if this is true or not.”

The gas transmission system in the area consists of two parallel pipelines, and initial data indicates that the explosion occurred in one of them.

The other pipeline remained undamaged.

Consumers in the Pasvalys district are being supplied with gas through the adjacent pipeline.

Sky’s Dominic Waghorn said: “It appears to be some kind of device or a terrible accident that ignited the pipeline and exploded it sufficiently to let enough gas escape to cause this kind of fireball.

“The background to this is that we have seen attacks on civilian energy infrastructures both in Ukraine, because of the war there, but also in parts of Russia.

“Whether [the pipeline in Lithuania] is related to the war or not, it isn’t clear, but it is certainly not something that normally happens to pipelines without some presumably nefarious or sinister motivation behind it.”

PM was told of Raab’s ‘unacceptable behaviour’ before appointing him to cabinet, source says
Advantage, Novak Djokovic in the race to be tennis’ GOAT
Police believe missing dog walker Nicola Bulley fell into river – investigation focuses on 10-minute window
‘It changed me’: The investigation into one of history’s worst space disasters – and its legacy
Memphis ‘Scorpion Unit’ under scrutiny after Tyre Nichols’ death