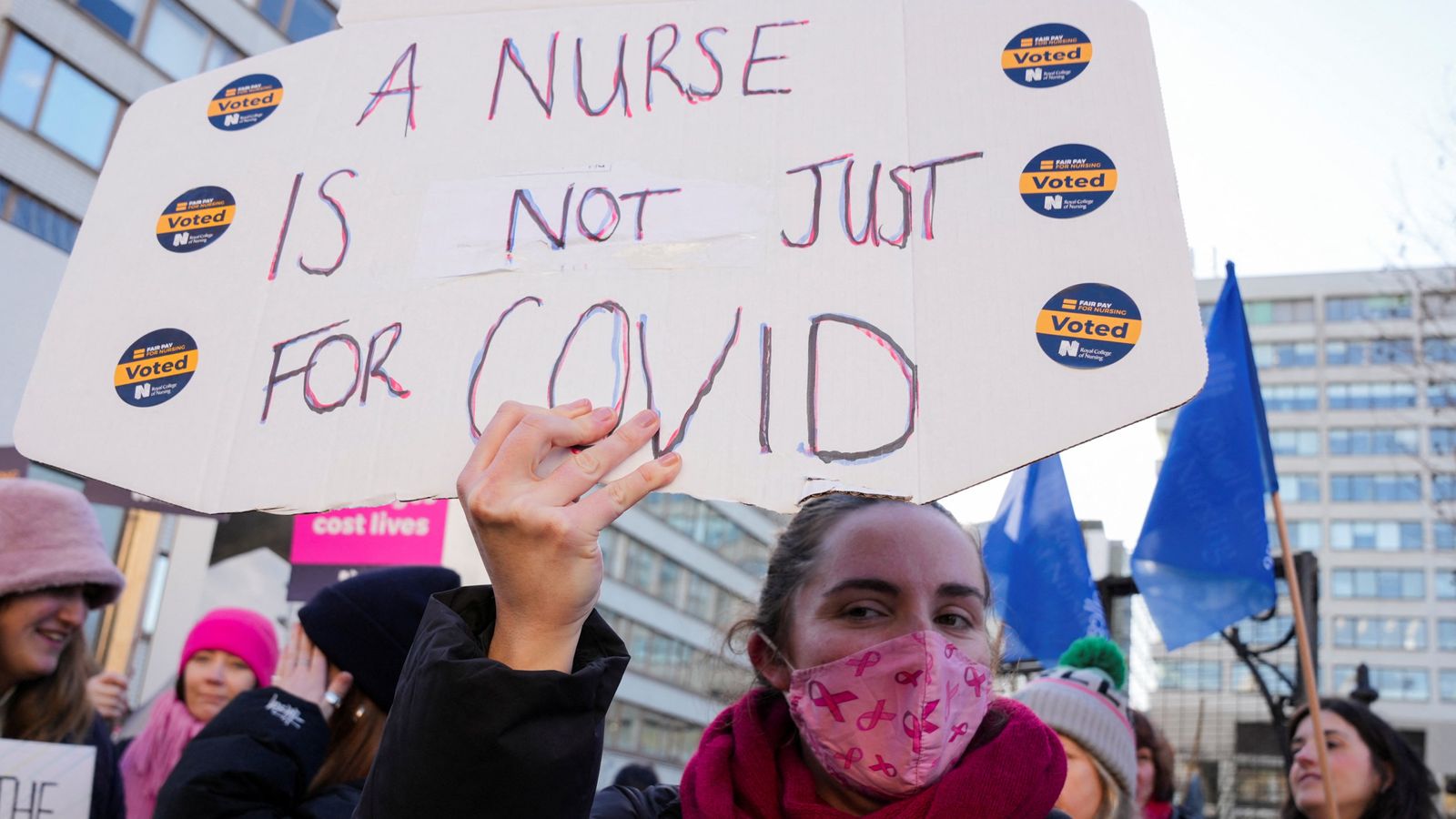 A controversial anti-strike bill has moved a step closer to becoming law – hours after teachers and nurses announced fresh walkouts.

Under the government’s draft Strikes (Minimum Service Levels) Bill, the right to strike would be restricted by imposing minimum service levels and bosses would be legally able to fire employees who ignore a “work notice” ordering them to work on days of industrial action.

The statute passed its second reading in parliament after MPs backed the legislation by 309 votes to 249 – a majority of 60.

As the bill was debated in the Commons, it was announced that the first strikes by teachers since 2016 will take place in February and March, while nurses also announced two further days of industrial action next month.

Meanwhile, ambulance workers are expected to announce up to six more strike dates on Wednesday.

During the Commons debate on the strikes bill, Business Secretary Grant Shapps said the legislation “does not seek to ban the right to strike”, adding: “The government will always defend the principle that workers should be able to withdraw their labour.”

Also, former home secretary Priti Patel suggested ministers should “look at widening the list of sectors where minimum service standards are needed” as the wave of industrial action continues across the UK.

Under the proposed legislation, the government will get the power to set minimum safety levels for fire, ambulance and rail services in England, Wales and Scotland.

They would also have the power to set minimum levels of service for health, education, nuclear decommissioning and border security – but the business department said ministers “expect to continue to reach voluntary agreements” with these sectors.

However, Labour’s deputy leader Angela Rayner described the bill as “one of the most indefensible and foolish pieces of legislation to come before this House in modern times”.

Read more: No 10 sticking to its guns on strikes but is this sustainable? – Beth Rigby analysis 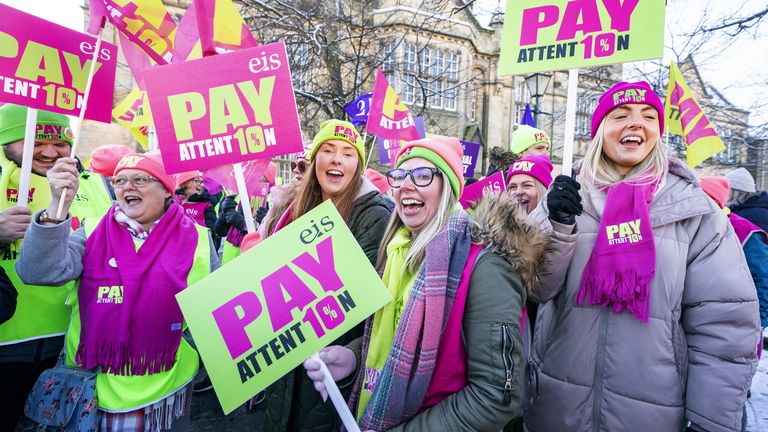 Teachers vote to strike next month

Teachers to strike on seven days in February and March

Thousands of teachers are set to walk out of classrooms over pay after the National Education Union (NEU) reached the threshold required to take strike action.

The largest education union had organised a ballot of 300,000 members in England and Wales, calling for a “fully funded, above-inflation pay rise”.

Nine out of 10 teacher members of the union voted for strike action and the union passed the 50% ballot turnout required by law to take industrial action.

The NEU said the vote shows teachers are not prepared to “stand by” and see the education service “sacrificed” due to “a toxic mix of low pay and excessive workload”.

Read more: Strikes this month – who is taking action and when

In a statement, Dr Mary Bousted and Kevin Courtney, joint general secretaries of the NEU, said: “We regret having to take strike action, and are willing to enter into negotiations at any time, any place, but this situation cannot go on.”

Agency staff and volunteers could be used to cover classes, with schools expected to remain open where possible and the most vulnerable pupils given priority – according to updated guidance issued by the Department for Education.

But headteachers in England will not stage walkouts after the National Association of Head Teachers (NAHT) union ballot turnout failed to meet the 50% legal threshold.

The union said it will consider re-running the ballot due to postal disruption.

Members of the Royal College of Nursing (RCN) in England are due to strike on Wednesday and Thursday this week.

The union has said its members will also walk out on 6 and 7 February.

In an escalation of industrial action, more NHS trusts in England will take part than during the two previous days of strikes in December – with the number increasing from 55 to 73. 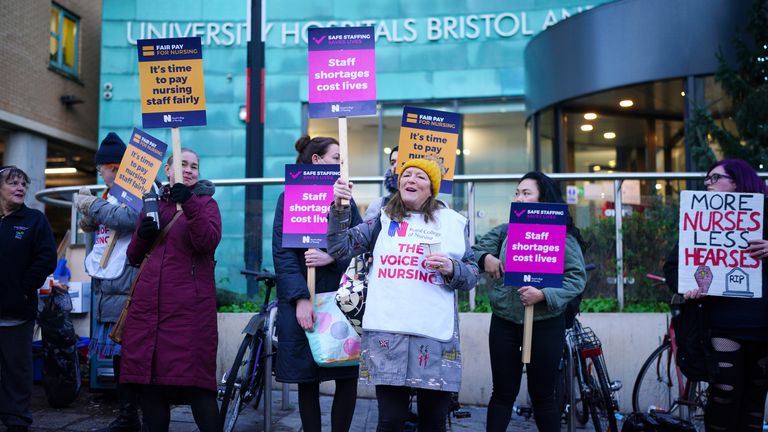 
Some 12 health boards and organisations in Wales will also take part in the two consecutive days of strikes.

The two days of industrial action by nurses in trusts across England and Wales in December led to the cancellation of thousands of hospital appointments and operations.

It is expected that the health service will run a bank holiday-style service in many areas during the strike action.

But RCN chief executive Pat Cullen said nurses are taking the measures “with a heavy heart”.

“My olive branch to government – asking them to meet me halfway and begin negotiations – is still there. They should grab it,” she said in a statement.

The RCN had initially demanded a pay increase of up to 19% to cover soaring inflation and falls in real term wages over the past decade.

But earlier this month, Ms Cullen said she could accept a pay rise of around 10% to end its ongoing dispute with the government. 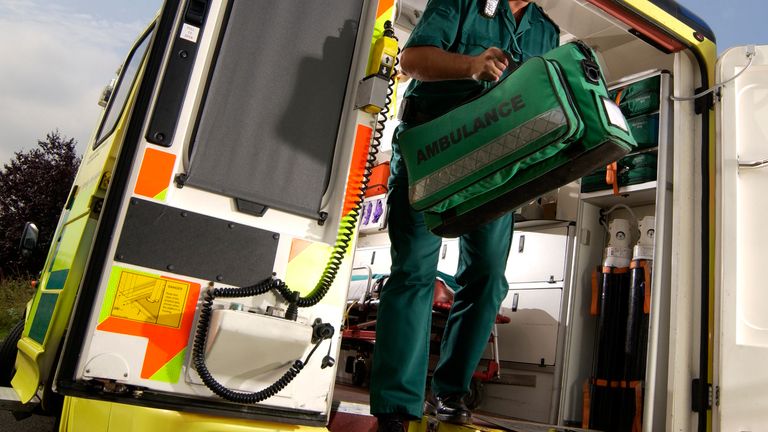 Up to six more dates are being discussed after talks with Health Secretary Steve Barclay last week broke down.

The government continues to insist that pay claims are unaffordable and is sticking to its belief that wage rises should be decided by pay review bodies.

Patriots owner reveals what Tom Brady told him when they met
Neo-Nazi and woman charged with conspiring to attack Maryland power grid
‘Can’t wait for this guy to die’: Reporter reveals some GOP sentiment towards Trump
One of UK’s most wanted arrested in Morocco over Essex drive-by shooting
Concerns about golden eagles are partly prompting the redesign of a Scottish wind farm