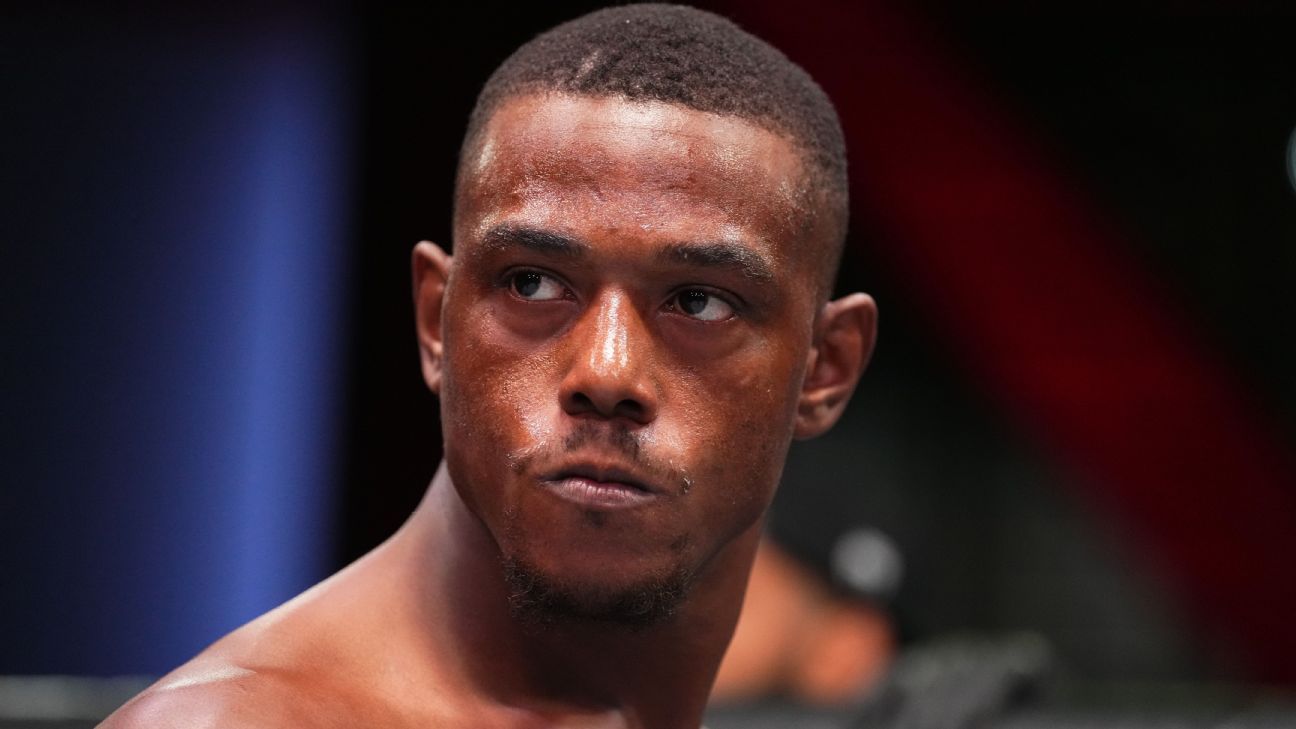 He had worked his way into the UFC’s light heavyweight top-15 rankings, but suddenly Jamahal Hill found that status in jeopardy. With his head and arm trapped inside the triangle of jiu-jitsu ace Paul Craig, Hill was nearly helpless.

Hill’s arm had been dislocated at the elbow by an armbar just seconds earlier during the first round of their fight at UFC 263 in June 2021. He hadn’t tapped out then, and he wasn’t quitting now, either. Hill showed his heart and determination as he continued to fight. But he could do nothing to stop his arm from flailing around lifelessly while Craig unleashed strikes to his head, and eventually the referee called the fight. Hill had his first pro loss in the biggest fight of his career.

Who is Hill, and how did the man known as “Sweet Dreams” overcome such a gruesome injury and work himself back up the ladder and into his first title shot?

Hill, 31, earned a UFC contract in 2019 on Season 3 of Dana White’s Contender Series with a second-round knockout over Alexander Poppeck. Six months later he made his UFC debut, and by the end of 2020 the fighter from Grand Rapids, Michigan, had made three appearances in the Octagon.

In his UFC debut, Hill flashed potential using his 6-foot-4 frame to control the range in a dominant unanimous-decision win over Darko Stošić. He ended that year with a second-round knockout over UFC veteran Ovince Saint Preux. In between those fights, Hill earned a first-round TKO over Klidson Abreu that was later ruled a no contest after Hill failed a postfight drug test for marijuana. Despite the official ruling, the streak of success that Hill put together was enough to earn him a spot in the division’s top 15 and his first appearance on a pay-per-view main card in the fight against Craig.

Then it all appeared to fall apart.

“Me losing was nothing short of me paying for disrespecting the game,” Hill said in an interview with MMA Junkie after the loss to Craig. “I truly, truly felt like all I had to do is show up. Any concerns I had, I filled it with arrogance. There’s a difference between confidence and flat-out arrogance. I was taught a lesson.”

In a message to his fans on Twitter, Hill said that he would “be back and stronger because of it,” and he was right. Just six months after the gruesome loss to Craig, Hill returned to the Octagon and recorded the first of back-to-back highlight-reel first-round finishes over Jimmy Crute and Johnny Walker. Against Crute, Hill needed only 48 seconds to connect with a right hook for a one-punch knockout. Hill managed to top that finish three months later, as he put away Walker with another right hook in astounding fashion.

The two wins were enough to earn Hill a serious step up in competition as he took on Thiago Santos, a former title challenger who was ranked in the top 10 of ESPN’s light heavyweight rankings at the time. Hill went on to extend his knockout streak to three with a fourth-round finish, earning him a spot in ESPN’s rankings.

“I feel like a title shot would be good,” Hill said when asked during his postfight interview about a potential fight against then-champion Jiří Procházka. “I’ve got twice as many finishes than he does, so we’ll see what’s up with that.”

While Hill’s performances alone since his only defeat may have been enough to warrant his title shot, the sequence of events around him in the division was ultimately what thrust him into this position.

Shortly after the Santos fight, the UFC announced that Procházka would not be putting his title on the line in a rematch with Teixeira. Rather, he was vacating the 205-pound title due to a shoulder injury, and the promotion was putting the belt on the line in a December fight between Jan Blachowicz and Magomed Ankalaev at UFC 282. That left Hill to take on fellow title hopeful Anthony Smith … it appeared.

But luck was in Hill’s favor.

The bout between Blachowicz and Anaklaev ended in a split draw, which left the promotion still without a champion and scrambling for options. Hill answered the call moments after the fight when the UFC offered him a fight with Teixeira for the still vacant title.

In Teixeira, much like Craig, Hill will be fighting an opponent whose clear objective is to take the fight to the mat. Teixeira is at least equally as skilled in grappling as Craig. This will be Hill’s chance to show he has learned from his self-proclaimed disrespect of the game, and if he succeeds, he will walk away with the world title.

2.3m households missed an essential payment in January, data reveals
Haiti is falling apart and there is no safety net – the perverse reality is that gangs have filled the gap
‘Nobody is born smart’: Ex-commander of Russian mercenary group apologises for fighting in Ukraine
Simpsons episode where Homer goes on strike shown by Channel 4 on ‘Walkout Wednesday’
Conor Daly open to last-minute Daytona 500 ride