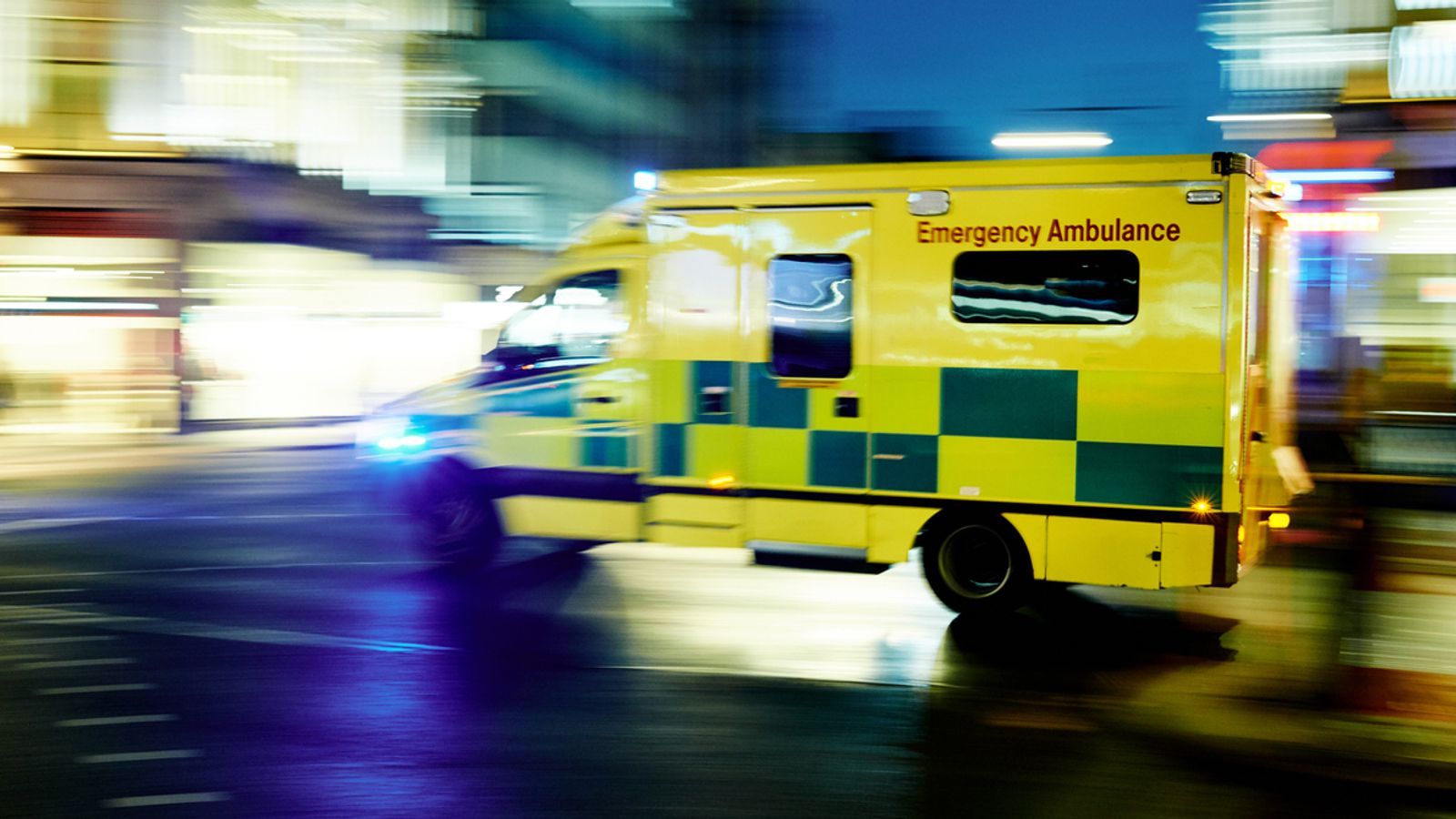 Ambulance response times are currently the worst on record and the NHS is struggling to cope with a surge in demand this winter.

Freezing fog hangs over Coventry as Danny and Dan make sure their radios are charged and vehicle fully stocked before heading out.

It is unusually quiet to begin with, but just before 8am they get their first call.

The patient is an elderly man who has fallen and injured his arm. They switch on the sirens and the blue lights flash as they speed through the fog.

Arriving at the house, they find the patient, 86-year-old Edward, in bed. Norma, his wife, is sitting next to him.

Edward’s arm is swollen and purple. It turns out he fell two days ago.

“It said on the television only call if it’s a matter of life and death,” Norma tells Danny.

He tells her to call straight away in future. They’re worried patients who need help have been put off calling by the advice given on strike days.

“People are a bit scared to call ambulances because they think they’re going to be stuck in corridors or in the back of an ambulance,” Dan says.

As they prepare to take Edward, who has advanced Parkinson’s, to A&E – they chat.

Dan asks Edward how long he and Norma have been married. “62 years,” he says. “How did you meet?” Dan asks. “In the pictures,” Edward replies.

“He thinks I’m superwoman,” Norma tells Danny, as she details how they manage without any carers.

But she’s relieved to see the paramedics.

“When I rang my heart sank because they stop halfway through and say use www… we’re not on world wide web,” she says. “I’m not moaning really, it’s just that we haven’t kept up to date with our technology”.

10am: Woman refuses to ‘freeze’ in A&E despite blood clot fear

“Straight in… very unusual,” Danny remarks as they wheel Edward into the A&E department in Coventry where he’ll have an X-ray to check if his arm is broken.

Back outside in the ambulance, their radio beeps to let them know it’s been 12 minutes since they handed Edward over.

That means they’re expected to be ready for the next call.

The next stop is an elderly patient whose district nurse fears could have a blood clot in her leg.

When they get to her house, Rosemary is sitting upstairs.

Her daughter explains they went to A&E a couple of weeks ago and spent hours waiting in a freezing corridor. They don’t want to go back.

After doing some tests Danny and Dan believe it’s fluid and not a blood clot causing the swelling.

They agree to take her to a same-day emergency care unit at the hospital in Nuneaton.

But on their way a category one call comes in. They’re the closest ambulance, so they apologise to Rosemary, switch on blue lights and head in the direction of the call.

A couple of minutes later though, they’re told to stand down.

They continue on their way with Rosemary and apologise for the diversion as they leave her at the hospital.

1pm: Seizure and slow heartbeat dealt with in five minutes

They don’t even get the chance to finish their lunch before another category one call comes in.

The details indicate that an elderly woman is having a seizure.

Inside the house they quickly establish there’s a problem with her heart and it’s serious. She’s already lost consciousness once.

They wheel her into the ambulance and carry out ECG tests. Her heart rate is dropping, there’s a risk it could stop.

Danny calls the hospital in Coventry to tell them to have a team ready.

Machines beep and the patient tells them she’s scared.

Danny and Dan work quickly to stabilise her heart rate. Their reassuring tone as they tell her not to worry contrasts with the urgency of the situation.

They get her to A&E within five minutes. Her heart is still beating, but very slowly.

They’re both just relieved that this wasn’t one of the days they’ve been stuck queuing outside hospital.

“The cardiac condition she had can often result in death if it’s not caught in time,” Danny says.

4pm: Good news but it was close

After completing all their paperwork, they finally get a lunch break at about 4.30pm. They can take half an hour, unless a category one call comes in. They head back to base where Dan joins a small group of colleagues.

After 30 minutes, Danny comes to get him. There’s another call.

Sirens on, they make their way to a house nearby. They can’t be sure the patient doesn’t have a blood clot, so they take her to A&E.

While there they find out the heart patient has had emergency surgery to fit a pacemaker. She’s doing well.

It’s good news to end the day. But they know it was close.

“Things can’t go on as they are,” Danny says. “Because we’re going to see patients suffering as a result of that.”

It’s rare to finish on time this winter – but on this occasion, they pull back into base exactly 12 hours after their shift began.

They restock the ambulance and wave to the teams taking over, before heading off into the night.